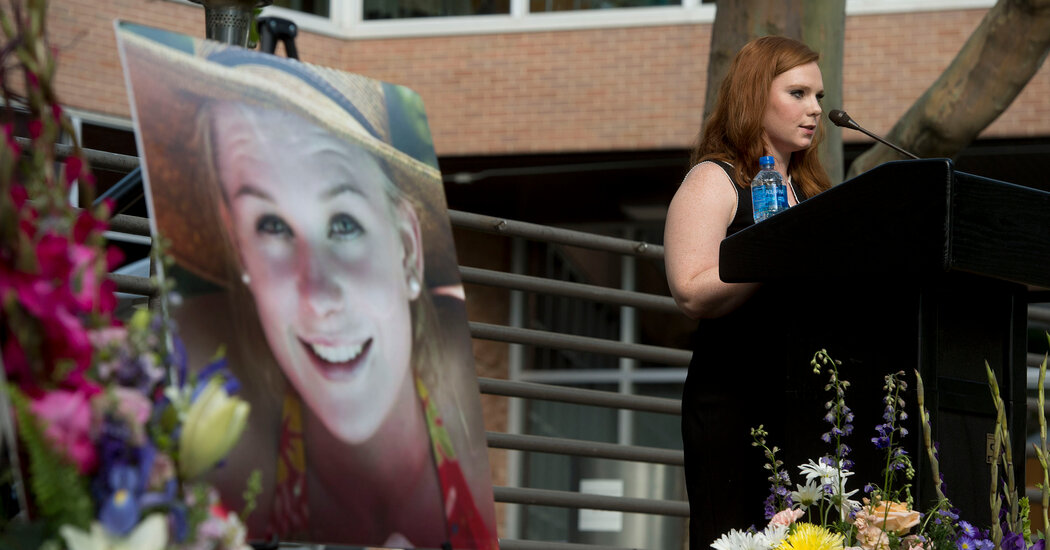 A Utah man who wrote a book that described the burning deaths of two people pleaded guilty on Wednesday to killing a University of Utah student whose charred remains he buried in his backyard last year, prosecutors said.

The man, Ayoola A. Ajayi, pleaded guilty to one count of aggravated murder and one count of desecration of a human body in the death of the student, Mackenzie Lueck, 23, whom Mr. Ajayi had met on a dating website, according to the Salt Lake County district attorney.

Under a deal with prosecutors, Mr. Ajayi, 32, will avoid a possible death sentence and will be sentenced later this month to life in prison without parole, the district attorney, Sim Gill, said.

Mr. Gill said Mr. Ajayi had also pleaded guilty on Wednesday to forcible sex abuse in a separate episode in March 2018, when he met another woman online, invited her to his house for dinner and then assaulted her as they watched television on his couch.

“Hopefully,’’ he said, “this is the beginning of closure for them and maybe for the retrieval of some measure of justice for this incredible loss they’ve suffered as a family.”

Mr. Ajayi and Ms. Lueck met in 2018 on the website Seeking Arrangement and then met in a park on June 17, 2019, prosecutors said. Mr. Ajayi, an information technology worker, had decided before the meeting that he would murder Ms. Lueck, prosecutors said, and turned off the video on his home security system before leaving his home to meet her.

After Ms. Lueck went back to Mr. Ajayi’s house, he tied her up and choked her, first with his hands and then with a belt, prosecutors said. He then buried her in his backyard and burned her body, clothing and belongings to try to cover up the killing, prosecutors said.

Several days later, after detectives with the Salt Lake City Police Department visited Mr. Ajayi’s home as part of their investigation into Ms. Lueck’s disappearance, Mr. Ajayi dug up Ms. Lueck’s remains and took them to Logan Canyon, where he buried them again in a shallow grave, prosecutors said.

After Mr. Ajayi’s arrest last year, Mike Brown, the chief of the Salt Lake City Police Department, said that Mr. Ajayi’s neighbors had told detectives that they had seen him burning something in his backyard with gasoline.

There was a freshly dug area on Mr. Ajayi’s property, and charred remains from the site matched Ms. Lueck’s DNA, the police said.

Brian Wolf, a contractor in Utah, told The Deseret News that Mr. Ajayi had asked him in April 2019 to build a secret soundproofed room with hooks on the wall. Mr. Wolf said that he had been uncomfortable with the request and turned it down and that he had contacted the police after realizing that Mr. Ajayi’s home was being investigated in connection with the killing.

Mr. Ajayi, who is from Nigeria, had studied at Utah State University in Logan. University police documents show that in 2012, he was barred from campus for several reasons, including problems with his visa and accusations that he had stolen an iPad.

He was allowed back on campus in 2015 after resolving his visa issues, a spokesman for the university said last year. He studied computer science but did not graduate.

In a statement last year, the North Park Police Department of North Logan, Utah, where Mr. Ajayi once lived, said he had been investigated in connection with a rape reported in 2014. The woman who accused Mr. Ajayi did not pursue charges, the police said.

Mr. Gill said that prosecutors were also aware that Mr. Ajayi had written a book, “Forge Identity,” which described the burning deaths of two people but that they considered it a “side issue” in the case. The book described a protagonist, Ezekiel, who as a teenager “must decide if he will join the ranks of a criminal mastermind, or fight to escape the tyranny that has surrounded his young life.” It appeared to be self-published.

Students who knew Ms. Lueck described her as an animal lover who was caring and devoted to her friends. She was a member of a sorority, Alpha Chi Omega, and a student in the university’s College of Health, pursuing a degree in kinesiology. She had been looking forward to a career in health sciences and had spoken to her advisers about going to nursing or medical school, the university said. She had planned to graduate in May 2020.