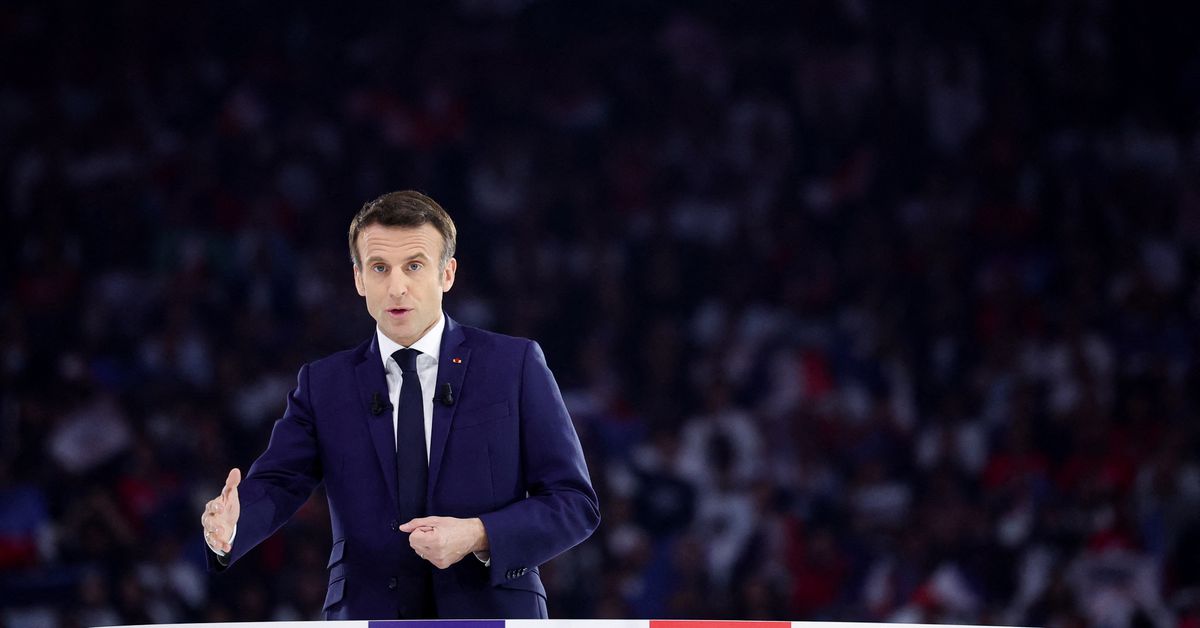 PARIS, April 2 (Reuters) – French President Emmanuel Macron warned of the risk of a Brexit-style election upset in his only campaign rally before the first round of the presidential election, in a bid to convince dispirited voters and re-energise a lacklustre campaign.

A week or so before the April 10 vote, Macron finds himself on the defensive, with far-right leader Marine Le Pen staging a comeback in the polls and the race tightening between the two frontrunners for the crucial April 24 runoff. read more

“Look at what happened with Brexit, and so many other elections: what looked improbable actually happened,” Macron told a crowd of flag-waving supporters. “Nothing is impossible.”

“The danger of extremism has reached new heights because, in recent months and years, hatred, alternative truths have been normalised,” he said. “We have got used to see on TV shows antisemitic and racist authors.”

Although he is still projected to win a second mandate, Macron has lost ground in the polls, a dip that some aides attribute to a manifesto that includes tough, conservative measures such as raising the state pension age to 65.

Others have also criticised a campaign that started late and lacked “magic”. read more

After a rockstar-like entry on to the stage of a 35,000-seat stadium outside Paris, Macron started his two-hour speech with a long list of accomplishments and promises to create jobs in hospitals and nursing homes, in a clear attempt to convince centre-left voters that pollsters say could abstain.

“Our lives, their lives, are worth more than profits,” he told the crowd, stealing a well-known anti-capitalist slogan. He also urged a round of applause for teachers and nurses.

However, he stayed true to his reformist programme, saying the French will have to work longer to pay for these measures, because he refused to raise taxes and increase a public debt pile that has ballooned to 102% of GDP during the pandemic.

“I am not hiding the fact that we will have to work more,” Macron said, attacking contenders such as Le Pen and far-left candidate Jean-Luc Melenchon who have promised to cut the pension age to 60.

“Don’t believe those who say they will cut the retirement age to 60 or 62 and that everything will be alright. That’s not true,” he added.

The rally of about 30,000 supporters – almost reaching the venue’s full capacity – was attended by former left-wing and right-wing prime ministers and other party grandees. Yet one supporter asked by Reuters found the speech underwhelming.

“It’s a speech that shows he wants to explain what he will do, but it lacked inspiration,” said Martin Rochepeau, a 22-year old student.