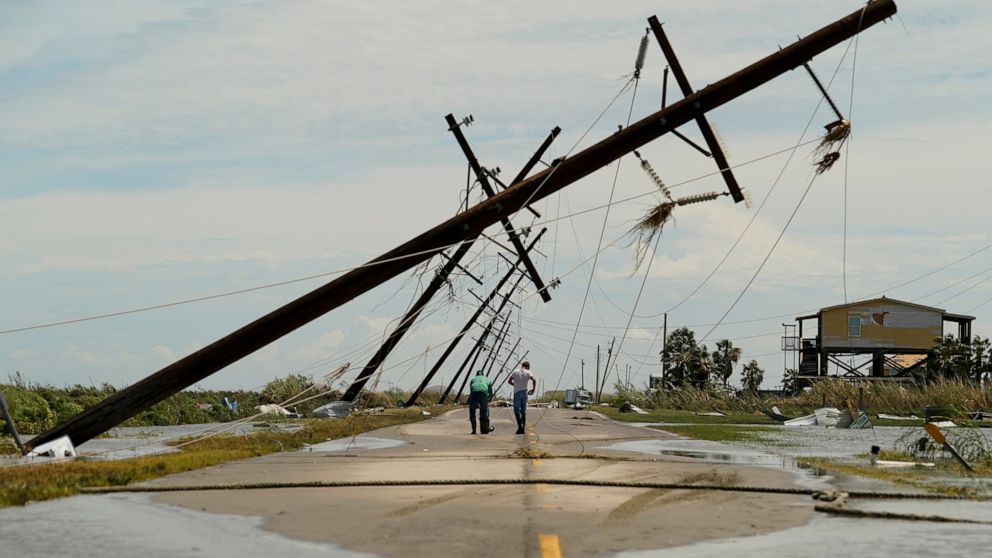 HOLLY BEACH, La. — The laidback stretch of coast known as Louisiana’s “Cajun Riviera” is nothing like its French namesake: Beachgoers are more likely to drink Bud Light than fine wine, and mobile homes and stilted houses take the place of luxury villas.

Hurricane Laura laid waste to the place, a low-cost paradise for oil industry workers, families and retirees, and it could be awhile before the good times roll again. Resident Robert Eggert hardly recognized Holly Beach, the area’s official name, after he came back Thursday to check the damage.

Near where he sat in his Ford SUV, utility poles tilted at odd angles and a sulfurous smell hung in the breeze. Stairs were ripped off brightly colored houses held aloft on stilts, and RVs pushed inland by the wind and water were clumped at the edge of a bayou.

“It should not look like a war zone,” said Eggert. “It’s vibrant, no debris. There are RVs, travel trailers, people, canopies, Jeeps, golf carts, flags. Life.”

Much of that stuff was still there after Laura pummeled the coast with winds up to 150 mph. But it was mostly broken and scattered across a forlorn landscape.

Hurricane Rita ripped apart the area in 2005, but people rebuilt. They did the same after Ike hit just three years later, in 2008. There’s no doubt many will clean up and keep going after Laura.

Hundreds of people partied at Holly Beach in May for “Go Topless Weekend on the Cajun Riviera,” an annual gathering for Jeep enthusiasts that includes a bikini contest. But there isn’t much else to draw big crowds to the spot, located in Cameron Parish, and that’s the way people like it.

“There’s not much to it,” says Ben Reynolds, a longtime resident of neighboring Calcasieu Parish. “It’s not the white sand and clear waters. It’s muddy; the sand is brown But that’s what you got. You can go down there and fish and camp. People have a lot of fun there.”