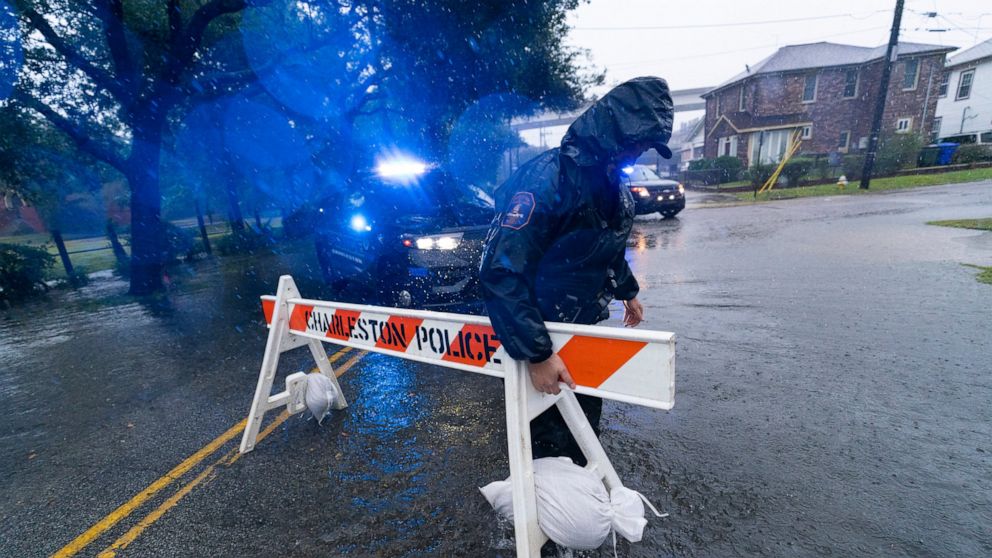 The Latest on Hurricane Ian:

RALEIGH, N.C. — Power outages have increased and some coastal rivers rose in North Carolina as heavy rain and winds from Hurricane Ian crept into the state Friday from the storm’s South Carolina landfall.

Gov. Roy Cooper says adjustments to the projected path of Ian could bring more trouble to central and eastern North Carolina than earlier believed. But he says the state’s emergency equipment and services have been staged to maximize flexibility.

He warns residents statewide to remain vigilant, given that up to 8 inches (20.3 centimeters) of rain could fall in some areas, with high winds.

More than 55,000 customers in North Carolina were without power as of mid-afternoon, according to PowerOutage.us, which aggregates outages nationwide.

— DeSantis shifts from provocateur to crisis manager after Ian

— After Ian, the effects in southwest Florida are everywhere

COLUMBIA, S.C. — A second pier in northern South Carolina has been destroyed by Hurricane Ian’s surge.

Local television footage showed the middle section of the Cherry Grove Pier near the North Carolina state line was washed away Friday afternoon by rising water and churning waves as Ian made landfall about 50 miles (80 kilometers) down the coast in Georgetown.

The area saw the brunt of the surge as Ian hit the United States again with flooded neighborhoods and widespread power outages.

MIAMI — Hurricane Ian has made another landfall, this time in South Carolina, after carving a swath of destruction across Florida earlier this week.

Officials in Florida fear the death toll from Hurricane Ian could rise substantially, given the wide swath of the state swamped by the storm.

After making landfall with some of the highest windspeeds for a hurricane over U.S. territory, the storm flooded areas on both of Florida’s coasts, tore homes from their slabs, demolished beachfront businesses and left more than 2 million people without power. At least nine people have been confirmed dead in the U.S.

Florida Division of Emergency Management Director Kevin Guthrie said responders have focused so far on “hasty” searches, aimed at emergency rescues and initial assessments, which will be followed by two additional waves of searches.

He said Friday that the initial responders might detect deaths without confirming them.

The beach community was situated in the path of Ian, whose wind gusts knocked out power for thousands across the state Friday, downing trees and power lines in its path. Earlier Friday, officials closed a causeway connecting Pawleys Island to South Carolina’s mainland.

In a tweet, officials said they were pausing response efforts “due to current wind conditions” and would resume service “as soon as it is safe to do so.”

Charleston police were also restricting access to the city’s Battery area, a spot at the tip of the peninsula that is home to many multi million-dollar, historic homes.

The NHL team announced Friday that $1 million each will be donated by the Tampa Bay Lightning Foundation and the Vinik Family Foundation.

“This is a tragic situation for many families and communities across the state of Florida, but especially so in the southwest region of the state,” Vinik said in a statement released by the team. “In times like these the most important thing we can do is support one another, and we hope this donation will help families recover and rebuild in the months to come.”

Ian made landfall Wednesday on Florida’s Gulf Coast, south of the Tampa Bay area. The Lightning postponed two home preseason games and moved the club’s training camp to Nashville, Tennessee during the storm.

Officials said power had been knocked out across the city as high winds and sheets of rain whipped trees and power lines pending Ian’s expected landfall just up the South Carolina coast.

The storm’s expected landfall coincided with high tide, a circumstance that was forecast to lead to widespread roadway blockages.

City officials were out early Friday, clearing storm drains and pumping water away from the historic Battery area along the city’s southern tip, into Charleston Harbor.

Kristen Knapp of the Florida Health Care Association says about 47 nursing homes and 115 assisted living facilities have been evacuated as of Friday, with around 8,000 residents among them.

While structural damage and flooding were reported at facilities across the storm’s path, Knapp said there have been no reports yet of serious injuries or deaths among those homes’ residents.

Steve Bahmer of Leading Age Florida, which represents non-profit long-term care facilities, offered a similar assessment, with reports of minor damage, broken windows, downed trees and flooding. He said one facility was hit by a tornado but residents have been able to remain there.

At least seven people were confirmed dead in Florida — a number that’s likely to increase as officials confirm more deaths and continue searching for people.

CHARLESTON, S.C. — The main airport in Charleston, South Carolina, has closed ahead of the expected arrival of Hurricane Ian.

Officials with the Charleston International Airport said Friday they had shuttered the airport, where airlines had already canceled dozens of fights, and winds reached 40 mph.

The airport will remained closed until 6 a.m. Saturday.

South Carolina Gov. Henry McMaster planned a briefing at 12:30 p.m. Friday. Under a federal disaster declaration approved by President Joe Biden, federal emergency aid has been made available to supplement South Carolina’s state, tribal and local response efforts pertaining to the storm, which was expected to make landfall in the state later Friday.

Streets were largely empty, an ordinarily packed morning commute silenced by the advancing storm. Flash flood warnings were posted, with up to 8 inches (20 centimeters) of rain forecast for the Charleston area, and high tide expected just before noon, a circumstance that often floods the downtown peninsula on its own with even moderate rainfall.

ST. AUGUSTINE, Fla. — The Florida Highway Patrol says a 37-year-old man and a 30-year-old woman died Thursday afternoon when their car hydroplaned and overturned in a water-filled ditch in north Florida amid Hurricane Ian’s impact on the state.

An incident report says the driver apparently lost control of the vehicle, which went onto the grassy shoulder before submerging in a water-filled ditch along Cracker Swamp Road in Putnam County, which is southwest of St. Augustine. The area was inundated with rain as Hurricane Ian passed through the state Thursday.

At least six people were confirmed dead in Florida.