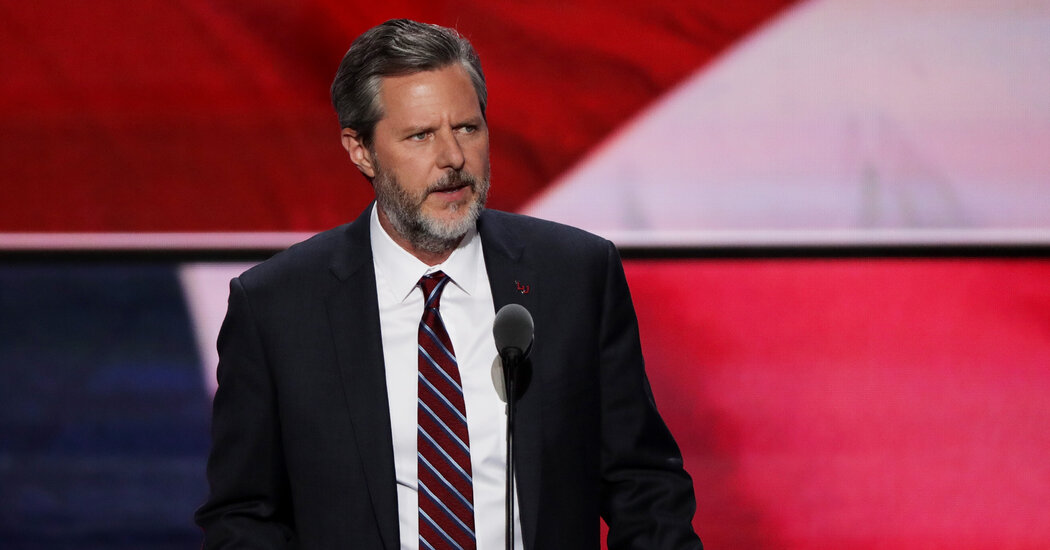 The board of trustees of Liberty University announced on Monday that it had retained an independent forensic firm to conduct an investigation into the school’s operations under Jerry Falwell Jr., who resigned last week in the wake of a sex scandal after serving as its president and chancellor since 2007.

The statement from the board of trustees said the firm would “conduct a thorough investigation into all facets of Liberty University operations during Jerry Falwell Jr.’s tenure as president, including but not limited to financial, real estate and legal matters.”

Mr. Falwell had been on leave from the university since Aug. 7, after he posted and then deleted a photograph to Instagram in which he had his pants partially unzipped and his arm around a young woman he later said was his wife’s assistant. He was holding a glass of dark liquid that he joked in the caption was “just black water.”

The photo prompted widespread criticism and led to unusually swift action from the evangelical university’s conservative board, handpicked for its loyalty to Mr. Falwell. The board placed Mr. Falwell on indefinite leave and appointed Jerry Prevo, a retired Alaska pastor and chairman of the board, as acting president.

Weeks later, a new scandal emerged when a former Miami pool attendant said he had had regular sexual liaisons with Mr. Falwell’s wife, Becki, while Mr. Falwell looked on. The man, Giancarlo Granda, said he met the Falwells in 2012 when he was 20 years old and working at a luxury hotel in Miami Beach.

The couple and Mr. Granda later entered into an unusual business relationship, with the Falwells making Mr. Granda a partner when they invested in a Miami youth hostel. Mr. Falwell, who had issued a statement characterizing the relationship as an affair between Mr. Granda and Ms. Falwell, resigned on Aug. 25.

The statement from Liberty’s board on Monday suggested that last week’s revelations came as a surprise. “It’s certainly fair to say that there were questionable comments made, worrying behavior and inappropriate social media posts, but all the signs were not there until the start of last week,” the board said. “While we still didn’t know the full scope of the matter, we have learned enough about the past to know that we had no choice but to take the leadership of Liberty University in a new direction.”

Mr. Falwell’s father, the pastor and political activist Jerry Falwell Sr., founded Liberty in 1971 as a small Baptist college. Under Jerry Falwell Jr.’s leadership it has grown into one of the country’s most prominent evangelical institutions, with an endowment of $1.6 billion and a sprawling campus.

But Mr. Falwell has also been a divisive figure, even within conservative evangelicalism. He is known for his crude language and his enthusiastic support for President Trump. And he has been accused of blurring the lines between his family finances and the school’s, with family members allegedly benefiting from campus construction contracts, for example.

The board of directors is currently searching for the school’s next president. Its statement on Monday said the board was “committed to learning the consequences that have flowed from a lack of spiritual stewardship by our former president.”