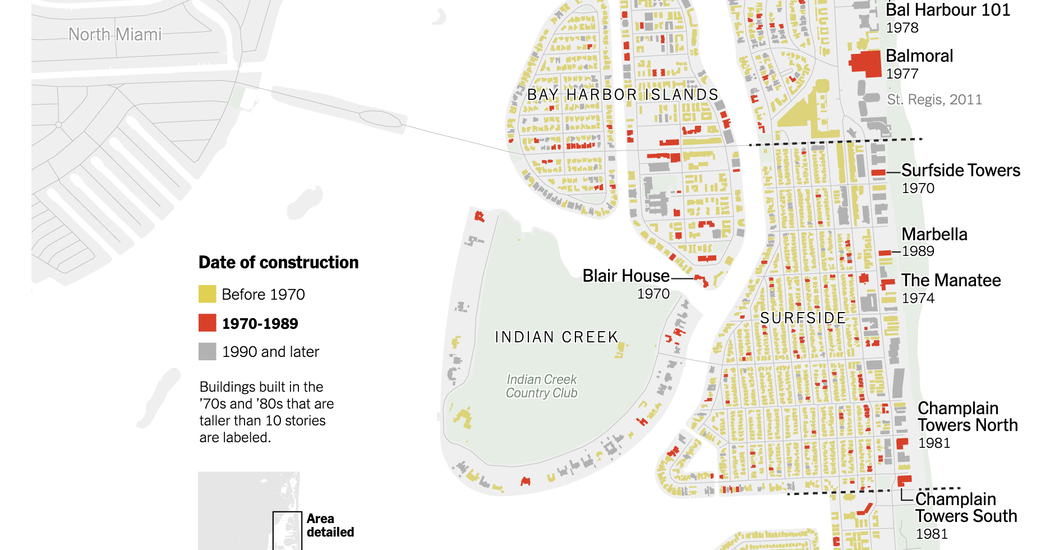 The condo building’s manager, Igor Bond, said Friday that he had been getting calls from concerned residents for a week. “They’re asking me about how safe the building is,” Mr. Bond said, “and we’re telling them, ‘Absolutely!’ ”

The condo association’s president did not respond to a request for comment.

Unlike the standards for single-family homes, which were blasted by critics after entire neighborhoods were wiped out by Hurricane Andrew in 1992, the regulations for multistory structures have been among the toughest in the nation since the 1950s, builders and engineers said. One major reason: Many of the area’s first high-rises went up along the ocean, and officials wanted to be sure they could stand up to hurricane winds, flooding and rain.

“Permits and the codes were always tough in South Florida,” said Oscar Sklar, an architect and builder who helped complete Champlain Towers East in Surfside in 1994. “I don’t think it was any more lenient before than now.”

The regulations became even tougher in the 1970s, when the collapse of a U.S. Drug Enforcement Administration building led to the 40-year recertification requirements.

They were strengthened once more in the mid-1980s, after a condo complex in Cocoa Beach, which is about 60 miles east of Orlando, collapsed during construction, killing 11 workers. That change required developers to hire independent inspectors to monitor the structural integrity of multistory development projects as they progressed, but it was not in effect when Champlain Towers South was going up in 1981.

Even so, buildings across the region have racked up histories of violations, allowed to linger in some cases as a result of spotty compliance and enforcement.

Bay Harbor Islands, for one, has struggled to bring all of its buildings into compliance with the tough recertification rules. Fourteen structures were supposed to submit 40-year inspection reports in 2020.