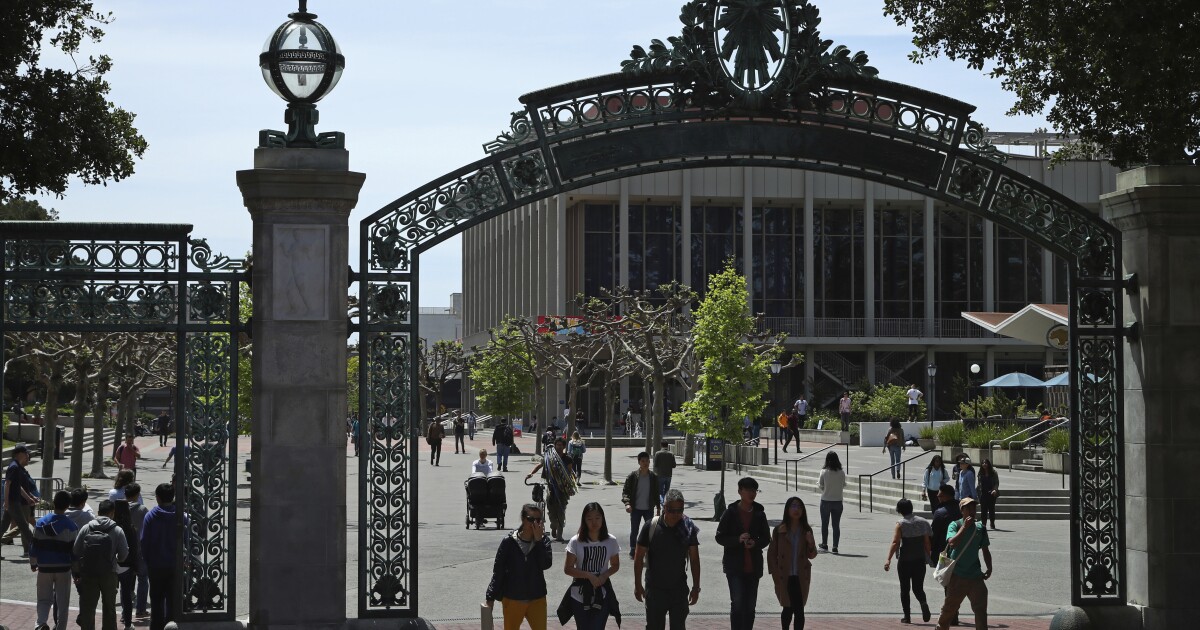 The new law in effect ends a frantic few weeks at one of the nation’s most sought-after campuses during its critical admissions period, and admissions offers will be extended as originally planned, a campus spokesperson said. The court order over housing issues had threatened cuts and a major enrollment reconfiguration for first-year and transfer students, many of whom would have been forced online or given deferred admission offers.

“I’m grateful to the Legislature for moving quickly on this critical issue — it sends a clear signal that California won’t let lawsuits get in the way of the education and dreams of thousands of students, our future leaders and innovators,” said Newsom, who had expressed support for UC Berkeley.

The legislation, passed unanimously by California lawmakers earlier Monday, will give the state’s public colleges and universities 18 months to complete any court-ordered environmental review before being subject to a mandatory reduction or freeze in campus population. This change would have an immediate and retroactive effect for UC Berkeley, Assembly Speaker Anthony Rendon (D-Lakewood) and Assembly Budget Chair Phil Ting (D-San Francisco) said in a statement Friday.

“On behalf of the thousands of students who will benefit from today’s vote, I want to thank California’s legislators for their quick and effective response,” UC Berkeley Chancellor Carol Christ said in a statement. “At Berkeley we are, and will remain, committed to continuing our efforts to address a student housing crisis through new construction of below market housing. We look forward to working in close, constructive collaboration with our partners in Sacramento in order to advance our shared interest in providing California students with an exceptional experience and education.”

The admissions debacle occurred after a neighborhood group successfully sued UC Berkeley, alleging that the university did not adequately address environmental issues related to increasing student enrollment. The legislation was presented as a rescue mission to help UC Berkeley after the California Supreme Court maintained a lower court order imposing an enrollment freeze, which would have forced the university to cut its in-person fall class by more than 2,600.

“Today’s action by the state Legislature affirms the University of California’s obligations under CEQA [the California Environmental Quality Act] while also safeguarding the bright futures of thousands of hardworking prospective UC Berkeley students,” he said in a statement. “The University shares our campus neighbors’ desire to undertake growth in a way that respects the surrounding community and mitigates impacts on the environment.”

Assembly Bill 168 and Senate Bill 118 were introduced Friday by the budget committee members in each house, who decided Monday to move Senate Bill 118 forward for a vote. The legislation unanimously passed in the Assembly and in the Senate.

“The only way that California can continue to grow economically, and continue to grow our fifth-largest economy in the world, is if we continue to allow people access to our wonderful higher education system, as long as we can keep it affordable,” Ting said during Monday’s hearing.

His sentiment was echoed during public comment at two hearings Monday. Those in support of the legislation repeated a mantra taken up by advocates seeking to reform the state’s premier environmental law, the California Environmental Quality Act: “Students are not pollutants.”

The theme has been used by those who believe that student enrollment should not be singled out for scrutiny under the California Environmental Quality Act.

“I am not a proponent of gutting an act that has made California a leader in environmental protections and environmental innovation. We act because we have seen recently the misguided application of an environmental law to student enrollment,” Rendon said. “The actual environmental impact is not from how many students we let in — it is a result of the total campus population and how that affects environmental quality. We must act today in a cautious fashion, to make sure the university could admit deserving applicants this year.”

Assemblyman Vince Fong (R-Bakersfield) noted that environmental standards are not being changed. “We are changing what they apply to,” he said.

The president of Save Berkeley’s Neighborhood — the group behind the lawsuit — called the legislation “poorly drafted and confusing” and urged Newsom not to sign it.

“UC Berkeley does not have the capacity to handle more students, and more than 10% of current Berkeley students suffer homelessness during their education,” President Phil Bokovoy said in a statement. “In addition, more than 15% suffer from food insecurity. We don’t want new students to have to live in cars, campers and hotel rooms like they are in Santa Barbara.”

State Sen. Scott Wiener (D-San Francisco), who introduced a bill last month that would exempt public universities’ housing developments from California’s arduous environmental review process, said the issue Berkeley faced in relation to CEQA was not unique, and that the law has been used to prevent the developments of other housing and transportation projects.

“Let’s pass this measure today. Let’s let the students get an education. But let’s not think for a minute that this mess was somehow an anomaly,” he said. “When it comes to CEQA, this UC Berkeley train wreck isn’t a bug — it’s a feature.”