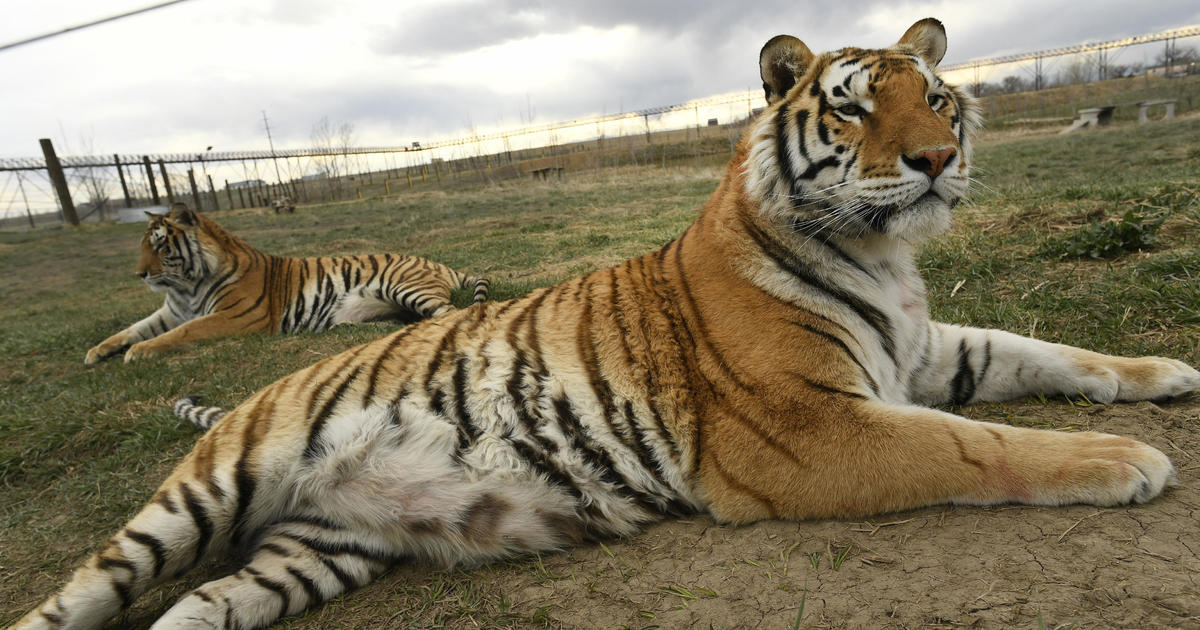 Federal law enforcement officers have seized nearly 70 protected big cats from Jeffrey and Lauren Lowe’s Thackerville, Oklahoma, Tiger King Park, the Department of Justice said Thursday. The Lowes, who have been accused of mistreating the animals, are best known for their appearance in the popular “Tiger King” docu-series.

Officials seized a total of 68 protected big cats — 46 tigers, 15 lion-tiger hybrids and seven lions — as well as one jaguar, the Justice Department said.

Since December of 2020, the Lowes’ Tiger King Park has undergone three inspections by the U.S. Department of Agriculture’s Animal and Plant Health Inspection Service, the DOJ said. The Lowes received citations for “failing to provide the animals with adequate or timely veterinary care, appropriate nutrition and shelter that protects them from inclement weather and is of sufficient size to allow them to engage in normal behavior.”

Prosecutors also said the couple did not comply with court orders that required them to employ a qualified veterinarian and create a veterinary care program in accordance to the Animal Welfare Act. The Lowes were recently found in contempt of that order, the DOJ said.

An affidavit for the search and seizure warrant alleged the 69 seized animals have been “harmed and harassed” while under the Lowes’ care. The affidavit cites a lack of veterinary care, a lack of non-contaminated food and a lack of adequate shelter as examples of harm. An attached affidavit from a veterinary medical officer said the animals were “at great risk of continued harm or suffering if they are not seized at once by the United States.”

The affidavit also alleged the Lowes obstructed the execution of a previous warrant on May 6. The document said Lowe told a federal officer she was “gonna kill” the affidavit author, who was present at the scene, and that Lauren, Jeff, and his adult son “engaged in a sustained pattern of verbal and physical harassment of law enforcement personnel including screaming profane personal attacks at close range.”

“The relentless harassment, intimidation of personnel, and physical obstructions resulted in the creation of an unsafe environment during a high-liability law enforcement activity dealing with the difficult search, seizure and movement of very dangerous wildlife species,” the affidavit stated. “A mistake made in this environment could easily result in the loss of life or grievous injury to someone on the property.”

This isn’t the first time that the Lowes have received federal attention. For years, the couple operated the Greater Wynnewood Exotic Animal Park in Wynnewood, Oklahoma, which was previously owned by the docu-series’ star Joseph Maldanado, also known as “Joe Exotic.”

But Lowe’s Animal Welfare Act exhibitor license was suspended in August for “inadequate” and “improper” care and handling of animals, prosecutors said. The couple then relocated to Thackerville, Oklahoma, the home of the 33-acre Tiger King Park.

Federal attorneys said that the duo’s property in Thackerville evaded federal inspection and did not have proper licensing. In November, the Department of Justice filed a civil complaint against the Lowes for operating an unlicensed exhibition park with endangered animals.

“The Lowes’ animals have suffered from and continue to suffer from easily preventable or treatable conditions, which in some cases has caused the untimely death of animals,” the November complaint from the DOJ said. “Indeed, in the last two years, many animals have not been seen and/or treated by a veterinarian at all.”