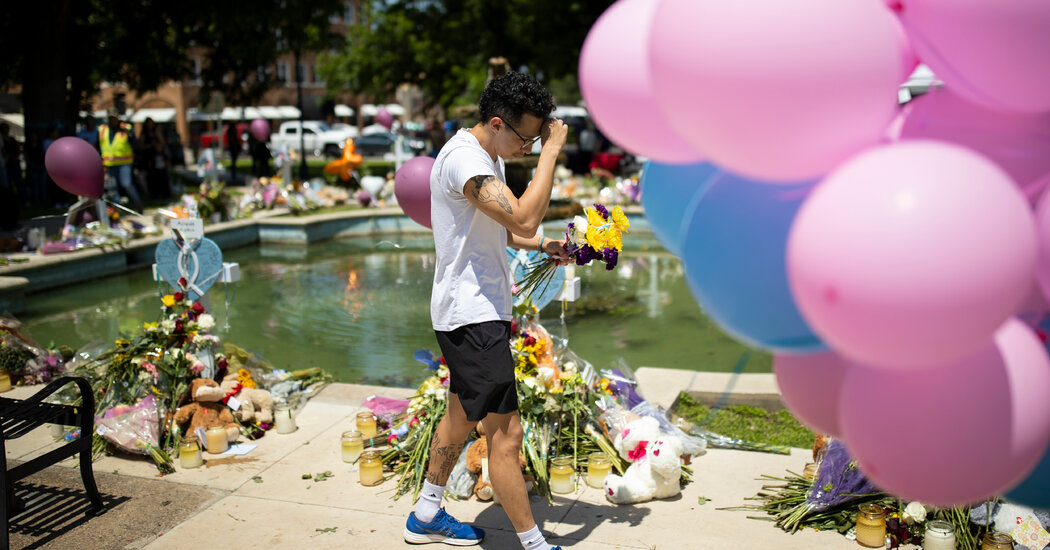 UVALDE, Texas — Furtively, speaking in a whisper, a fourth-grade girl dialed the police. Around her, in Room 112 at Robb Elementary School, were the motionless bodies of her classmates and scores of spent bullet casings fired by a gunman who had already been inside the school for half an hour.

She whispered to a 911 operator, just after noon, that she was in the classroom with the gunman. She called back again. And again. “Please send the police now,” she begged.

But they were already there, waiting in a school hallway just outside. And they had been there for more than an hour.

The police officers held off as they listened to sporadic gunfire from behind the door, ordered by the commander at the scene not to rush the pair of connected classrooms where the gunman had locked himself inside and begun shooting shortly after 11:30 a.m.

“It was the wrong decision, period,” the director of the state police, Steven C. McCraw, said on Friday after reading from the transcripts of children’s calls to 911 and from a timeline of the police inaction during nearly 90 minutes of horror at the elementary school in Uvalde, Texas.

After days of shifting explanations and conflicting accounts, the disclosures answered many of the basic questions about how the massacre had taken place. But they raised the even more painful possibility that had the police done more, and faster, not all of those who died — 19 children and two teachers — would have lost their lives.

The frank and sudden revelation by Mr. McCraw that a police commander decided not to go inside the classroom even as the gunman continued shooting brought forth an eruption of shouts and emotional questioning. At times, Mr. McCraw struggled to be heard. At others, he appeared overcome, his voice breaking.

Gov. Greg Abbott of Texas, who earlier in the week had said the police “showed amazing courage by running toward gunfire,” said on Friday at a news conference in Uvalde that he had been “misled” about the events and the police response, adding that he was “absolutely livid.”

Mr. Abbott, who hours earlier abandoned plans to appear at a National Rifle Association convention in Houston, told reporters that state lawmakers would review the tragedy and determine what went wrong. “Do we expect laws to come out of this devastating crime? The answer is yes,” he said.

To the children inside Robb Elementary School, Tuesday began as a day of celebrations and special treats — movies in classrooms, photos with family in front of a glittery curtain and award ceremonies for students finishing their year in two days, as relatives proudly gripped their hands as they walked down the hallways.

Gemma Lopez had gym class that morning, and an awards ceremony. She watched “The Jungle Cruise” with her fourth-grade classmates in Room 108. Some of the students finished up work, others played around, “doing whatever we do,” as she put it.

Then she heard loud popping in the distance, like firecrackers. She realized something was wrong because she saw police outside the classroom window. And the popping grew louder.

“Everyone was scared and everything, and I told them to be quiet,” Gemma, 10, said. One of her classmates thought it might be a prank and laughed. Gemma said she had hushed her. They had done drills for this. She turned out the classroom lights, as she had been taught to do.

“I heard a lot more of the gunshots, and then I was crying a little bit,” she said, “and my best friend Sophie was also crying right next to me.”

The 18-year-old gunman, who crashed his grandmother’s pickup truck at 11:28 a.m. in a ditch by the school, began by firing outside — more than 20 times, first at bystanders and then at classroom windows. A Uvalde school district police officer arrived at the scene but did not see the gunman and drove past him.

Minutes later, the gunman was inside, pulling open a side door that should have been locked but had been propped open by a teacher who had gone outside to retrieve her cellphone.

Jasmine Carrillo, 29, was working in the cafeteria with about 40 second-graders and two teachers when the attack began. The lights dimmed — part of a schoolwide lockdown that had gone into effect.

Once he entered the fourth-grade building, Ms. Carrillo said, the shooter banged and kicked on the door of her 10-year-old son Mario’s classroom, demanding to be let in. But he could not open the locked door.

Instead, he moved to others.

In the connected classrooms, Room 111 and Room 112, a pair of teachers, Eva Mireles and Irma Garcia, had also been showing a movie, “Lilo & Stitch,” as the students finished up their lessons. One of the teachers moved to close the door and seal the classroom from the hallway. But the gunman was already there.

Miah Cerrillo, 11, watched as her teacher backed into the classroom, and the gunman followed. He shot one teacher first, and then the other. She said he shot many students in her classroom, and then went to the adjoining one and opened fire, said her grandfather, Jose Veloz, 71, relaying the girl’s account.

Then he began shooting wildly.

The terrifying echo of at least 100 gunshots rattled through the school as children in the classrooms and both of the teachers there were shot and fell to the ground. It was 11:33 a.m.

Not all of the children inside were killed in that horrifying moment. Several survived and huddled in fear next to their limp friends. One of the children fell on Miah’s chest as she lay on the ground, her grandfather said. Terrified he would return to her classroom, Miah said, she took the blood of a classmate who fell dead and rubbed it all over herself. Then she played dead herself.

Two minutes after the gunman first entered the pair of classrooms, several police officers from the Uvalde Police Department rushed into the school. A pair of officers approached the locked door to the classrooms as gunfire could be heard inside. The two were struck — graze wounds, as their injuries would later be described — as bullets pierced the door and hit them in the hallway.

Minutes passed. Miah heard the gunman go into the room next door and put on “really sad music,” as she described it to her family.

Inside the room, the gunman fired 16 more shots. More officers arrived outside. By noon, there were 19 officers from different agencies in the hallways, and many more outside the school.

By 12:10 p.m., one of the students phoning 911 reported that eight or nine students were still alive, Mr. McCraw said.

Parents gathered near the grounds and around Uvalde, a close-knit community of 15,000 west of San Antonio, searching desperately for any word of their children inside, increasingly distraught at the silence of texts sent and not replied to.

“I prayed with four ladies that everything would be all right,” said Lupe Leija, 50, whose 8-year-old son, Samuel, was inside. In the midst of the pandemonium, his wife, Claudia, sent their child’s teacher a text: “Kids OK?”

In less than a minute, she got the response that she wanted: “Yes, we are.”

Other parents were increasingly angry, urging the officers who appeared to be milling about to end the shooting that they could plainly see and hear was still going on.

But the commander at the scene, Chief Pete Arredondo of the Uvalde school district police department, determined that the nature of the situation did not call for officers to rush in, as active shooter trainings have prescribed for decades, since the massacre at Columbine High School in 1999.

Mr. McCraw said the commander had determined that the gunman was no longer an active shooter, but a barricaded suspect — “that we had time, there was no kids at risk,” he said. The commander ordered up shields and other specialized tactical gear to enter the room.

Through the long, excruciating minutes, they waited for it.

“They were there without proper equipment,” said Javier Cazares, who arrived in anguish at the elementary school, panicked for his daughter, Jackie Cazares, who was trapped inside. He watched as the shields were brought in slowly and not at the same time. “One guy came in with one and minutes later, another one came in,” he said.

Chief Arredondo did not respond to requests for comment on Friday.

By 12:15 p.m., specialized officers from the Border Patrol arrived at the school after driving about 40 minutes from where they had been stationed near the border with Mexico.

The federal agents arrived to a scene of chaos — people pulling children out of windows while the local police, carrying only handguns and a few rifles, were trying to secure a perimeter. The specially trained agents did not understand why they were left to wait, a law enforcement official said.

At 12:19 p.m., another girl called from Room 111, but quickly hung up when another student told her to. Two minutes later, there was another call, and three shots could be heard.

More time passed. Another call came to 911 from one of the two girls at 12:47 p.m. By then, the children had been trapped with the gunman for over an hour.

The girl in Room 112 implored: “Please send the police now,” according to the transcript read by Mr. McCraw.

A few minutes later, at around 12:50 p.m., the specially trained officers from the Border Patrol opened the locked door with keys from a school janitor and burst into the room, firing 27 times inside the classroom, and killing the gunman.

Another eight spent cartridges were found in the hallway, fired by law enforcement. During the course of the massacre, the gunman fired 142 times, Mr. McCraw said, using an AR-15-style rifle, one of two he had purchased several days earlier with a debit card, just after his 18th birthday.

Jackie, who always wanted to be the center of attention, the “little diva” to her family, died in the shooting, alongside her classmate and cousin, Annabelle Rodriguez, a quiet, honor-roll student.

Miah, the 11-year-old whose classmate died beside her, survived, as did both of the children who had quietly called 911.

But Miah’s family has been unable to hug her because of the bullet fragments embedded in her back and in the back of her head, said an aunt, Kimberly Veloz. She still needs to see a specialist in San Antonio to remove them, but she does not want to leave the house, she said.

“She still thinks he’s going to come and get her,” Ms. Veloz said. “We told her that he’s dead. But she does not understand.”

Mario, the 10-year-old whose mother was working in the cafeteria, has refused to eat since Tuesday and is unable to sleep at night.

The academic year in Uvalde is over now, but Mario’s mother, Ms. Carrillo, said her son, afraid of another attack, does not want to go back to school.

She has had to be honest with him, that the friends he made at Robb Elementary, his friend Jose Flores, the schoolmates he expected to see again in the fall, were all gone.

“They are with God now,” she told him.