Lakeland, Fla., Is Selling Some of Its Beloved Swans 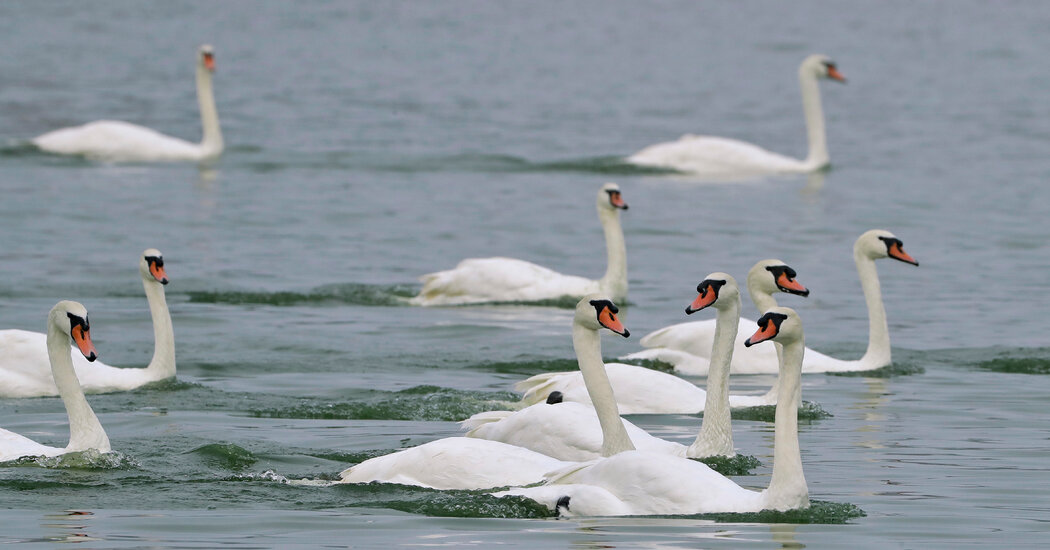 For nearly a century, swans have bobbed and preened in the placid waters of Lake Morton in Lakeland, Fla., making the graceful, long-necked birds virtually synonymous with the city.

The birds even have royal roots: The current population is descended from a pair that Queen Elizabeth II donated in 1957 after Lakeland’s swans were wiped out.

Now, however, the city has too many of the birds on its hands and is looking to offload some of its 86 swans by holding a public lottery on Friday.

Lakeland is selling 36 mute white swans, divided evenly between males and females, to ease overcrowding at Lake Morton, their longtime home in the city’s historic district.

“We had two really good nesting seasons this past year,” said Kevin Cook, a city spokesman, noting that the mile-wide lake now has a number of cygnets, or baby swans. “The lake can only handle so many birds.”

Swans have been a fixture in Lakeland, a city of about 112,000 people about 35 miles east of Tampa, as far back as 1923, the city’s website says. The city even uses a swan as its logo.

“Over time, dogs and alligators took those swans away,” Mr. Cook said. The swan population began to dwindle, and by 1953 there were none left, according to the city.

One resident, whose husband was stationed with the Air Force in England, missed seeing the swans gliding regally in the lake, Mr. Cook said. She wrote to Queen Elizabeth II asking if she could donate a pair from her royal flock.

The queen agreed. On Feb. 7, 1957, a breeding pair of mute swans arrived in Lakeland, Mr. Cook said. “Generations have been there since,” he said.

People interested in buying the swans have to register for the lottery by 5 p.m. Thursday. People can buy a maximum of two swans, each selling for $400. As of Thursday morning, about 66 people had signed up for the lottery, Mr. Cook said.

On Friday, the city will choose names and contact the buyers, who will have until Oct. 23 to pay for the swans.

On Oct. 29, they can pick up their swans. Buyers also have to sign a sales agreement in which they agree “to provide a healthy and safe habitat for the swans,” including a water source such as a pond or lake and veterinary care on an annual basis, at a minimum.

Earlier this month, the city held its 40th annual Swan Roundup, a medical checkup for the waterfowl. Employees from the Lakeland Parks and Recreation Department used boats and nets to carefully gather the birds from the lake.

The next day, local veterinarians volunteered to check on their health. The birds were microchipped and weighed, and some were separated for the sale. The city also held swan sales in 2014 and 2011.

The birds remain beloved in Lakeland. To protect them, the city reduced the speed limit around Lake Morton to 20 miles per hour and installed raised crosswalks to help slow traffic, Mr. Cook said.

Bob Donahay, the city’s parks and recreation director, said in a statement that it costs the city about $10,000 a year to feed and care for the city’s domestic swans.