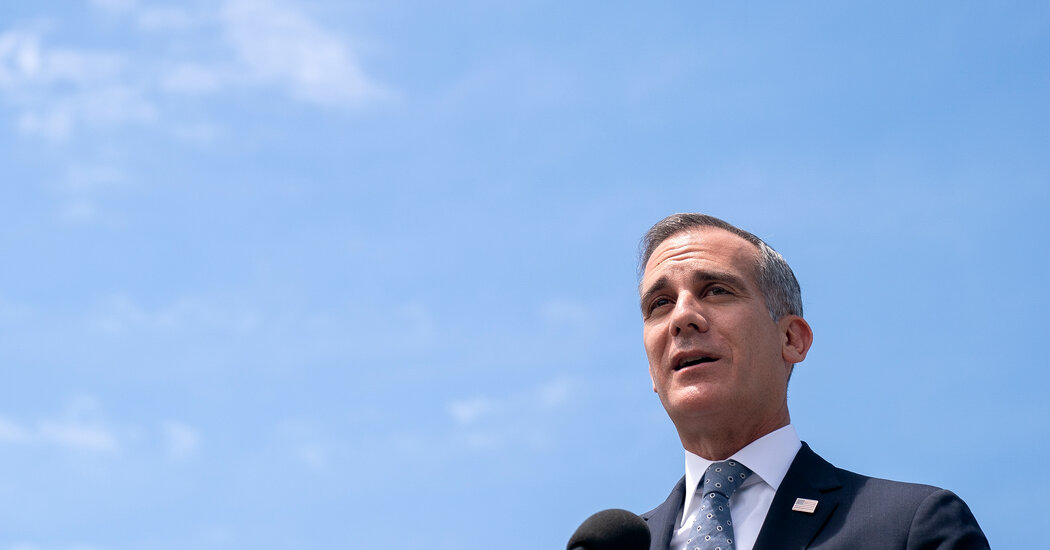 Local officials and Jewish leaders in Los Angeles on Thursday condemned an attack against Jewish diners outside a sushi restaurant this week that the Los Angeles Police Department has said it was investigating as an anti-Semitic hate crime.

“We have to recognize this for what it is: It’s anti-Jewish and anti-Semitic,” Mayor Eric Garcetti said in an interview. “You have to be specific and say what it is.”

Mr. Garcetti said he was confident about the city’s investigation into the attack, and hoped to announce progress within the next several days.

In a video capturing part of the episode, multiple cars proceed slowly down the busy street in front of the restaurant, which is near several synagogues and Jewish schools. A man with a megaphone shouts slogans like “Israel kills children” from one of the cars, before multiple men leave their vehicles to confront diners on the sidewalk outside the restaurant. A fight breaks out, and one man swings a heavy stanchion at the attackers. At least one person was injured.

The attack came amid escalating violence in Israel and Gaza that has sparked protests in the United States.

The attack on Tuesday began with a “large caravan” of people waving Palestinian flags as they drove through several neighborhoods in West Los Angeles, according to Vito Palazzolo, deputy chief of the Police Department’s Operation West Bureau, who spoke on Thursday on a call hosted by the Jewish Federation of Greater Los Angeles.

A witness told a local television station that members of the caravan who approached the restaurant began throwing bottles at diners outside and using anti-Semitic slurs.

“It was a hate crime,” the witness told CBSLA. “It was prepared, they came to fight with Jewish people.” Another witness told the station that dozens of men ran from the caravan toward the restaurant asking, “Who’s Jewish?”

Detective Palazzolo said there have been five large protests in the city over escalating violence in the Middle East since last week, and that they have been “relatively peaceful.”

Police in Los Angeles are also investigating an encounter on Monday in which at least two vehicles chased down an Orthodox Jewish man on the street as they shouted anti-Jewish slurs. He escaped without physical harm.

Although anti-Semitic physical assaults in the United States declined during the coronavirus pandemic, 2020 still saw the third-highest number of anti-Semitic incidents overall since the Anti-Defamation League began keeping track in 1979. The previous year saw the most incidents in the report’s history, including a deadly attack on a synagogue in Poway, Calif., and in 2018, 11 people were killed during a shooting at a synagogue in Pittsburgh.

Anti-Semitic violence in the United States tends to spike in response to conflicts in the Middle East and other international events, and around contentious elections domestically, said Brian Levin, director of the Center for the Study of Hate and Extremism at California State University, San Bernardino. Hate crimes against American Jews jumped in March 1994, for example, after an American-Israeli man opened fire on worshipers in a mosque in Hebron, and in October 2000 during a Palestinian intifada, according to F.B.I. crime reports analyzed by Mr. Levin and his team.

In Los Angeles, many Jews said they were horrified by the attack and have felt fearful in the days since.

“I’ve lived in L.A. my entire life and I never really thought this could happen,” said Michael Yadegaran, an Iranian-American Jew in the city who said he knew several of the people who were attacked on Tuesday. He has watched news reports of anti-Semitic violence across the country with alarm. “It’s high time that people wake up,” he said. “These are not sporadic isolated incidents.”

Mr. Yadegaran is raising funds online for a Lebanese-Armenian man at the sushi restaurant who defended his Jewish friends and was “severely beaten by a band of cowards,” as Mr. Yadegaran put it online. He has raised more than $30,000.

Rabbi David Wolpe, who heads Sinai Temple in Los Angeles, said that many members of his congregation, especially those from Iran, “have a deep fear of the speed with which an incident or two can turn into a conflagration.”

“There really is a tipping point that we’re trying not to reach,” he said. “With the striking of a match, you hope it goes out without starting a fire.”