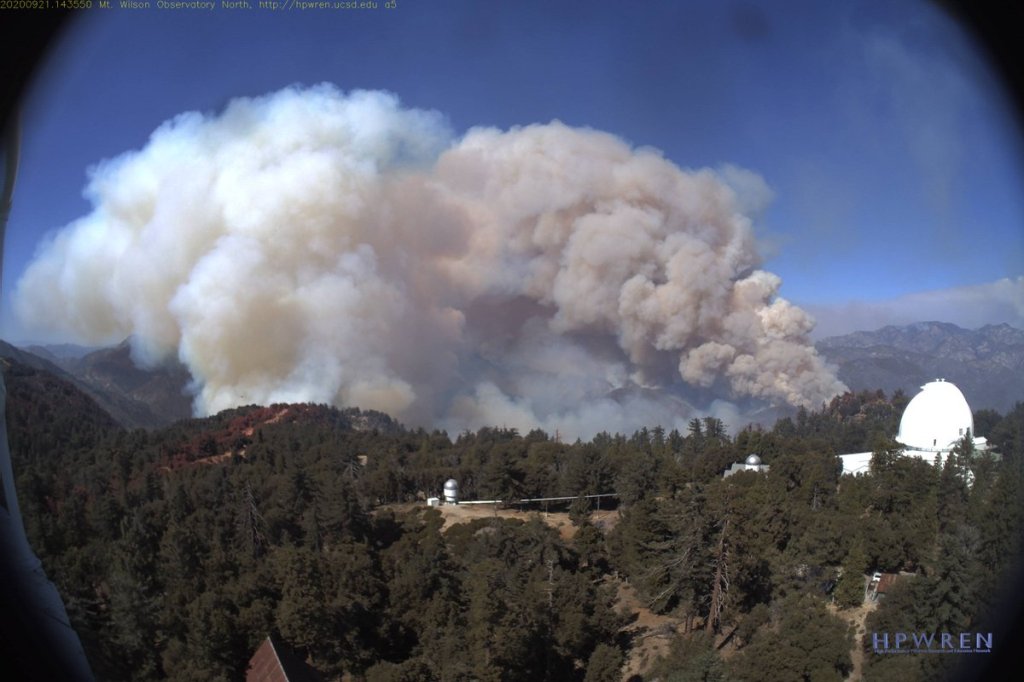 After days of backfires and dozer lines had held the Bobcat Fire away from the Mt. Wilson Observatory and communications infrastructure there, The U.S. Forest Service reports that the fire “is making a hard push” at Mt. Wilson, and “defensive strategic operations are beginning from Mt. Wilson to the west.”

Every TV station in Los Angeles uses the towers atop Mt. Wilson to transmit its signal. Likewise many radio stations. The peak is also important for ensuring cell phone service in the area.

According to the Angeles National Forest Twitter account, engines, hand crews and aircraft were working on Monday afternoon to snuff out spot fires to the north of Mt. Wilson. The fire was 15% contained as of Monday afternoon, a number that has remained unchanged for at least the past five days.

#BobcatFire Engines, hand crews and aircraft are currently working on picking up spot fires to the north of Mt. Wilson. pic.twitter.com/GcIJBR4yWy

The Bobcat Fire threatened the mountain last week. It came within 500 feet of the famed observatory and was beaten back. But in the days since low humidity and hazardous winds have allowed the blaze to more than double in size to 105,000 acres on Monday. That makes it one of the biggest fires in L.A. history. The 160,000 acre Station Fire was the largest ever recorded. For a sense of scale, the entire Angeles National Forest is 700,000 acres.

Comms towers silhouetted against a big flareup on the #BobcatFire tonight north of Mt. Wilson. These towers beam TV signals to the LA basin, among other functions. In fact, the microwave signal I am sending out from the helicopter to @CBSLA is hitting one of these towers. pic.twitter.com/K3VWJU4WdM

The National Weather Service in Los Angeles warned of “elevated brief critical fire weather” on Monday, with afternoon winds “in the area S-SE 5-10 mph” and relative humidity at 30-35%. Weather-wise, the really bad news is in the extended forecast.

“Wind direction begins to veer to the west and northwest late Wednesday which could be the first evening Sundowners [Santa Anas] returning to western hills of the south Santa Barbara County coast,” says the NWSLA forecast.

Sundowner winds and I-5 corridor winds will likely add downslope warming to many areas with heights building to 592dm or higher by Saturday.

Looking beyond Saturday, the GEFS and ECMWF ensembles both hint at a significant warm up late this weekend and early next week as high pressure encompasses the Great Basin and West Coast. The bottom-line is that we could be flirting with record temperatures once again with highs 95-105 degrees in the coastal and interior valleys, especially if we get any significant offshore wind regime. The hot and dry scenario will likely become a headline not only for the potential heat stress and record highs, but for fire weather concerns for new and existing fires. Large plume growth would likely contribute to rapid fire growth and fire behavior.

An evacuation warning has been issued for the residents in the areas indicated in the attached document. @Angeles_NF @LACoFDPIO pic.twitter.com/v9BO90LJJW

Structures were damaged in the Antelope Valley over the weekend, according to Vince Pena, unified incident commander with the Los Angeles County Fire Department. The number of homes affected was not available.

On Saturday, the blaze “was very active due to the very windy conditions. The fire reached Juniper Hills and the adjacent communities. Homes were threatened and impacted,” the Forest Service reported. ‘A strategic firing operation occurred to establish a secure line between the Ranch 2 Fire scar and Highway 39. Elsewhere on the fire crews had success improving and securing lines.”

11700 block of Roadrunner Lane. #BobcatFire appears to have damaged or destroyed a structure on this property across the steeet from 11703. Fire appears NOT to have crossed road. @FOXLA pic.twitter.com/ER253Qf70B

Another home lost in #BobcatFire
11800 block of Juniper Hills Road, Littlerock.
Praying everyone got out safely. 💔@foxla pic.twitter.com/TUO0ZZdDZK

Cheryl’s entire Juniper Hills home/animal rescue burned to the ground 🥺 She lost her cat, her 100 y/o barn, life’s work, all her great grandmother’s stuff. Thankfully, her other animals (horses, 8 dogs, parrots, turtles, koi) made it. I’m getting a link to help❤️ #BobcatFire pic.twitter.com/d06LQgIdLc

One Twitter user posted video of what he called a “fire-nado” on Big Pines Highway.

Extreme Fire-Nado (not an official term) convection winds created this throwing rocks and ash all around as it swept across Big Pines Hwy just now. Please contact for licensing any content. #BOBCATFIRE pic.twitter.com/gcvUVMSq8y

The Bobcat Fire erupted on Sept. 6 near the Cogswell Dam and West Fork Day Use area northeast of Mount Wilson and within the Angeles National Forest. The cause remains under investigation.

Full containment of the fire is not expected until Oct. 30.