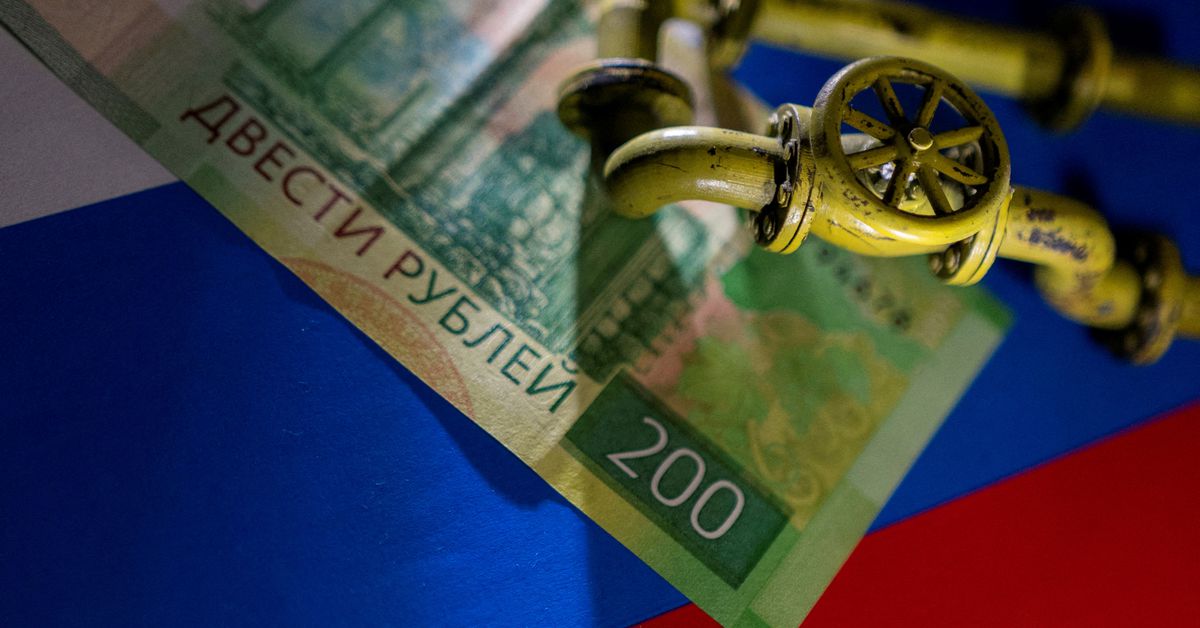 A model of the natural gas pipeline is placed on Russian Rouble banknote and a flag in this illustration taken, March 23, 2022. REUTERS/Dado Ruvic/Illustration/File Photo/File Photo

LONDON, April 3 (Reuters) – President Vladimir Putin’s rouble payment scheme for natural gas is the prototype that the world’s largest country will extend to other major exports because the West has sealed the decline of the U.S. dollar by freezing Russian assets, the Kremlin said.

Russia’s economy is facing the gravest crisis since the 1991 collapse of the Soviet Union after the United States and its allies imposed crippling sanctions due to Putin’s Feb. 24 invasion of Ukraine.

Putin’s main economic response so far was an order on March 23 for Russian gas exports to be paid in roubles, however the scheme allows purchasers to pay in the contracted currency which is then exchanged into roubles by Gazprombank.

“It is the prototype of the system,” Kremlin spokesman Dmitry Peskov told Russia’s Channel One state television about the rouble for gas payment system.

“I have no doubt that it will be extended to new groups of goods,” Peskov said. He gave no time frame for such a move.

Peskov said that the West’s decision to freeze $300 billion of the central bank’s reserves was a “robbery” that would have already accelerated a move away from reliance on the U.S. dollar and the euro as global reserve currencies.

The Kremlin, he said, wanted a new system to replace the contours of the Bretton Woods financial architecture established by the Western powers in 1944.

“It is obvious that – even if this is currently a distant prospect – that we will come to a some new system – different from the Bretton Woods system,” Peskov said.

The West’s sanctions on Russia, he said, had “accelerated the erosion of confidence in the dollar and euro.”

Putin has said the “special military operation” in Ukraine is necessary because the United States was using Ukraine to threaten Russia and Moscow had to defend against the persecution of Russian-speaking people by Ukraine.

Ukraine has dismissed Putin’s claims of persecution and says it is fighting an unprovoked war of aggression.

Russian officials have repeatedly said the West’s attempt to isolate one of the world’s biggest producers of natural resources is an irrational act that will lead to soaring prices for consumers and tip Europe and the United States into recession.

Russia has long sought to reduce dependence on the U.S. currency, though its main exports – oil, gas and metals – are priced in dollars on global markets. Globally, the dollar is by far the most traded currency, followed by the euro, yen and British pound.