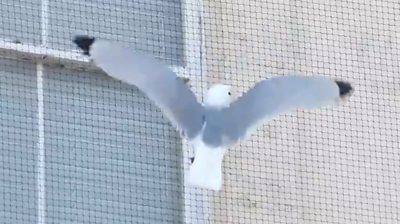 The RSPB has called for netting on buildings to be taken down because it is stopping endangered birds from nesting.

Video posted on Twitter showed a kittiwake trying but failing to reach ledges in Lowestoft, Suffolk. A dead bird was later found trapped there.

In the tweet, the RSPB said: “Heartbreaking to see kittiwakes find their home nesting sites blocked by nets.”

Two of the building’s occupants have pledged to take action.