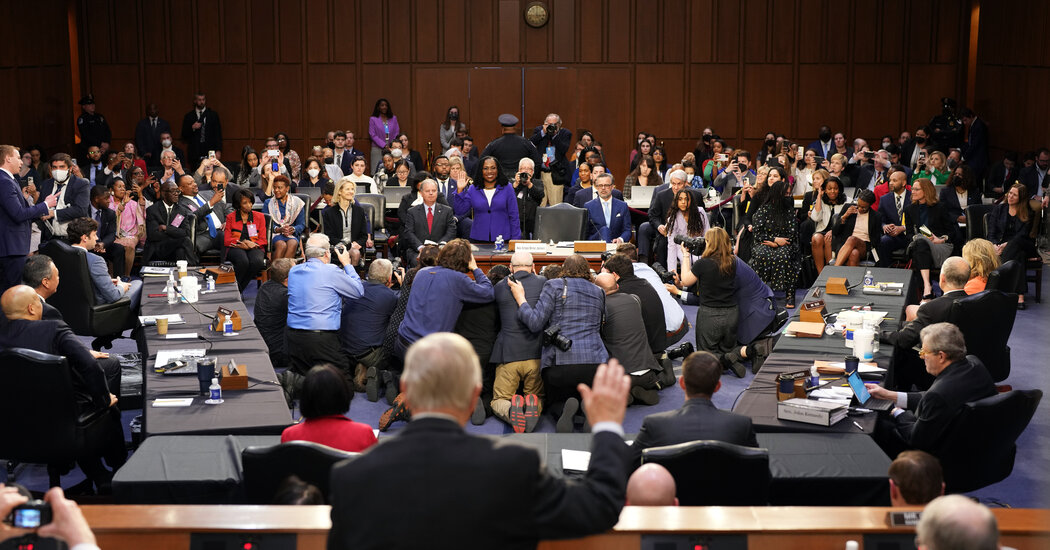 Judge Ketanji Brown Jackson, the first Black woman nominated to serve on the Supreme Court, vowed to make the words inscribed on its edifice — “Equal Justice Under Law” — “a reality and not just an ideal” in opening remarks to the Senate Judiciary Committee on Monday.

Judge Jackson, 51, began by first thanking God, and then the people who had brought her to the threshold of history. She started with her parents, recalling her father’s decision shortly after her birth to relocate from Florida to Washington, D.C., to escape racism and “experience new freedom.”

She noted that the spirit of public service they instilled in their children led her into a judicial career and inspired her younger brother to join the Army after the terrorist attacks on Sept. 11, 2001. He served two tours in the Middle East.

“I cannot possibly thank them enough for everything they’ve done for me,” she said as they watched. “I love you, Mom and Dad.”

Judge Jackson also reminded those watching the hearing that she, like Justice Amy Coney Barrett, who was appointed by President Donald J. Trump in 2020, is the mother of school-aged children.

“I know it has not been easy as I’ve tried to navigate the challenges of juggling my career and motherhood,” she told her two daughters.

Judge Jackson, who joked about her propensity for writing lengthy decisions, was notably economical in expressing her worldview and judicial philosophy.

In remarks that lasted just under 15 minutes, she committed to adopt a “neutral stance” if confirmed and promised to continue to produce expansive, “transparent” opinions so that “each litigant knows that the judge in their case has heard them, whether or not their arguments prevail.”

Judge Jackson spoke late on Monday afternoon, after hours of alternating celebrations of her achievements by Democrats and probing attacks from Republican leaders, who have acknowledged they do not have the votes to stop her. One by one, they lobbed a range of criticisms, including her work on behalf of defendants in criminal cases and her seat on the board of a school that “pushes an anti-racist education program for white families,” according to Senator Marsha Blackburn, Republican from Tennessee.

Judge Jackson did not address any of those issues in her prepared remarks. She was attentive, however, to the more conventional conservative criticism that she would use her power on the high court to impose liberal policies, without appropriate judicial restraint.

“I have been a judge for nearly a decade now, and I take that responsibility, and my duty to be independent, very seriously,” said Judge Jackson, who currently serves on the U.S. Court of Appeals for the District of Columbia Circuit.

“I decide cases from a neutral posture,” she added. “I evaluate the facts, and I interpret and apply the law to the facts of the case before me without fear or favor, consistent with my judicial oath. I know that my role as a judge is a limited one.”

Judge Jackson, who sat impassively as senators made their speeches appeared at ease in a hearing room where she has successfully navigated three prior confirmations.

There is also a sense of the familiar about her proximity to the court: Judge Jackson served as a clerk for the man she hopes to replace, Justice Stephen Breyer, from 1999 to 2000.

“It is extremely humbling to be considered for Justice Breyer’s seat,” Judge Jackson said. “But if confirmed, I would hope to carry on his spirit. On the day of his Supreme Court nomination, Justice Breyer said, ‘What is law supposed to do seen as a whole? It is supposed to allow all people to live together in a society where they have so many different views.’”