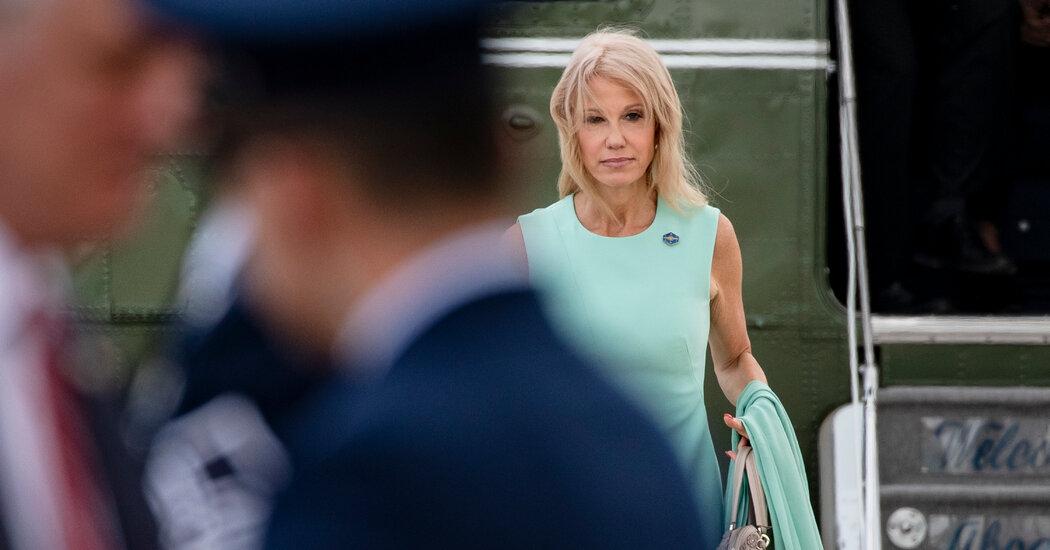 Kellyanne Conway, President Trump’s counselor and one of his longest-serving and most visible aides, said on Sunday night that she planned to leave the White House next week.

In a statement posted on Twitter, Ms. Conway said she was stepping away from a demanding job to spend more time with her four teenage children. “This is completely my choice and my voice,” she said. “In time, I will announce future plans. For now, and for my beloved children, it will be less drama, more mama.”

Ms. Conway, who is still set to speak at the Republican National Convention on Wednesday night, told Mr. Trump of her decision to leave on Sunday night in the Oval Office.

In a White House famous for its fast revolving door, Ms. Conway’s survival has made her something akin to a tenured official in an otherwise uncertain workplace. She had been in discussions last week with campaign officials about potentially moving from the White House to the campaign, and traveling to two states a day through the election as a surrogate. But she decided that a job on the road would be equally onerous on her family.

Her husband, George T. Conway III, a prominent conservative lawyer who has become an outspoken critic of Mr. Trump’s, said Sunday on Twitter that he was stepping back from the anti-Trump group he has been advising, the Lincoln Project. Mr. Conway said he would also take a hiatus from his Twitter account, where he regularly criticizes the president and his aides.

The Conways have known Mr. Trump for nearly 15 years, meeting him in New York when he was a real estate developer. In 2011, when Mr. Trump was considering running for president, Ms. Conway, then a pollster with her own company, was one of the people Mr. Trump consulted with about a possible campaign.

Since the 2016 campaign, when she served as Mr. Trump’s final campaign manager, Ms. Conway has been one of the president’s most visible defenders, winning his admiration for animated sparring sessions with cable news hosts — and earning criticism and derision from the president’s detractors. Ms. Conway also advised Vice President Mike Pence when he was the governor of Indiana.

During her time at the White House, she has asserted herself when other senior administration officials, including Jared Kushner, the president’s son-in-law, and aides who have long since departed, like Stephen K. Bannon, the former White House chief strategist, and Reince Priebus, Mr. Trump’s first chief of staff, have tried to minimize her. She has stepped into the void by helping to shape communications strategy and speaking to reporters when the White House has had few aides willing to defend the president or his policies publicly. Most recently, she has attended all of the coronavirus task force briefings, and encouraged Mr. Trump to restart his daily news conferences.

Mr. Trump and his family members have defended Ms. Conway even as her husband, who had initially been tapped for a job in the administration, became an outspoken critic of the president, accusing him regularly of having narcissistic personality disorder.

In her statement, Ms. Conway said she and her husband “disagree about plenty but we are united on what matters most: the kids.”

Their oldest daughter, Claudia Conway, tweeted on Sunday that she, too, was planning to take a break from social media after attracting national attention for criticizing both of her parents.