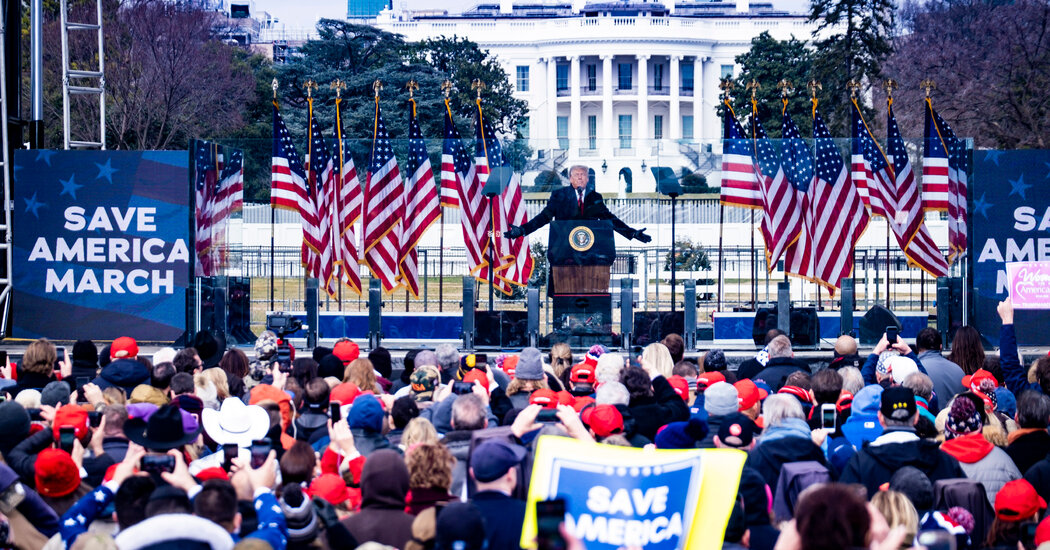 Federal prosecutors have substantially widened their Jan. 6 investigation to examine the possible culpability of a broad range of figures involved in former President Donald J. Trump’s efforts to overturn the results of the 2020 election, people familiar with the inquiry said on Wednesday.

The investigation now encompasses the possible involvement of other government officials in Mr. Trump’s attempts to obstruct the certification of President Biden’s Electoral College victory and the push by some Trump allies to promote slates of fake electors, they said.

Prosecutors are also asking about planning for the rallies that preceded the assault on the Capitol, including the rally on the Ellipse on Jan. 6 of last year, just before a pro-Trump mob stormed the Capitol.

The federal investigation initially focused largely on the rioters who had entered the Capitol, an effort that has led to more than 700 arrests. But the Justice Department appears to have moved into a new phase, seeking information about people more closely tied to Mr. Trump. This development comes amid growing political pressure on Attorney General Merrick B. Garland to move more aggressively on the case.

A grand jury sitting in Washington is investigating the rallies that preceded the storming of the Capitol, a person familiar with the matter said.

One of the subpoenas, which was reviewed by The New York Times, sought information about people “classified as VIP attendees” at Mr. Trump’s Jan. 6 rally.

It also sought information about members of the executive and legislative branches who had been involved in the “planning or execution of any rally or any attempt to obstruct, influence, impede or delay” the certification of the 2020 election.

And it asked about the effort by Trump supporters to put forward alternate slates of electors as Mr. Trump and his allies were seeking to challenge the certification of the Electoral College outcome by Congress on Jan. 6.

Another person briefed on the grand jury investigation said at least one person involved in the logistics of the Jan. 6 rally had been asked to appear.

The expanded criminal inquiry is unfolding as a separate investigation by the House select committee on the Capitol riot is gathering evidence about Mr. Trump’s efforts to hold onto power and weighing the possibility of making a criminal referral of Mr. Trump to the Justice Department.

On Monday, a federal judge in California, in a civil case involving the House committee, concluded that Mr. Trump likely engaged in criminal conduct, including obstructing the work of Congress and conspiring to defraud the United States.

Mr. Garland has given little public indication of whether the Justice Department would consider prosecuting Mr. Trump, saying only that the department will follow the facts wherever they lead.

But the expanded inquiry, elements of which were reported earlier by the Washington Post, suggests that prosecutors are pursuing a number of lines of inquiry. Those include any connections between the attack on the Capitol and the organizers and prominent participants in the rally on the Ellipse, and potential criminality in the promotion of pro-Trump slates of electors to replace slates named by states won by Mr. Biden.

The Justice Department previously said it was looking into the slates of electors that had falsely declared Mr. Trump the victor in seven swing states won by Mr. Biden.

Even as election officials in the seven contested states sent official lists of electors who had voted for Mr. Biden to the Electoral College, the fake slates claimed Mr. Trump was the winner in an apparent bid to subvert the election outcome.

Lawmakers, state officials and the House committee investigating the Jan. 6 riot had asked the Justice Department to look into the role played by those fake electors and the documents they submitted to the National Archives on Dec. 14, 2020. The grand jury subpoenas suggest that prosecutors are seeking to gather evidence of whether submitting the documents to a federal agency amounted to a crime.

Jan. 6 call logs. According to White House call logs, President Donald J. Trump attempted to cling to power by reaching out repeatedly to members of Congress before and during the Capitol attack. These logs also show a 7-hour gap with no record of calls when investigators know that Mr. Trump was making them.

Allies of Mr. Trump had been thinking about trying to put in place their own slates of electors at least as far back as 15 days after Election Day. The House select committee is also investigating the fake electors scheme.

The House committee’s investigators, like the federal prosecutors, have also been interested in the planning and financing of the Jan. 6 rally on the Ellipse and key figures involved in it. Ali Alexander, a prominent figure in the pro-Trump “Stop the Steal” movement and an organizer of the rally, has been cooperating with the House committee. Mr. Alexander marched to the Capitol from the rally with Alex Jones, the conspiracy theorist and Infowars host.

The House panel has also been seeking information from Amy Kremer, the chairwoman of Women for America First, which helped plan the rally.

The committee has also sent subpoenas seeking information from Katrina Pierson, Mr. Trump’s former national campaign spokeswoman; Kylie Jane Kremer, the daughter of Amy Kremer and the director of Women for America First; Lyndon Brentnall, the owner of a Florida-based security company who was the “on-site supervisor” for the rally; Maggie Mulvaney, a niece of the former top Trump aide Mick Mulvaney who is listed on the permit for the event; Megan Powers, an operations manager; and Tim Unes, whose company was listed as the stage manager for the gathering.

The criminal charges against rioters so far have ranged from misdemeanors to obstructing Congress in its duty to certify the Electoral College result. The committee has also lodged conspiracy charges against leaders of two of the extremist groups who figured prominently in the Capitol attack, the Oath Keepers and the Proud Boys.

Enrique Tarrio, the former leader of the Proud Boys, was charged this month with conspiring with other top lieutenants of the far-right nationalist group to disrupt the certification of the election.

In January, prosecutors charged Stewart Rhodes, the founder and leader of the Oath Keepers militia, with seditious conspiracy for what the government has described as a plot to violently disrupt the work of Congress.