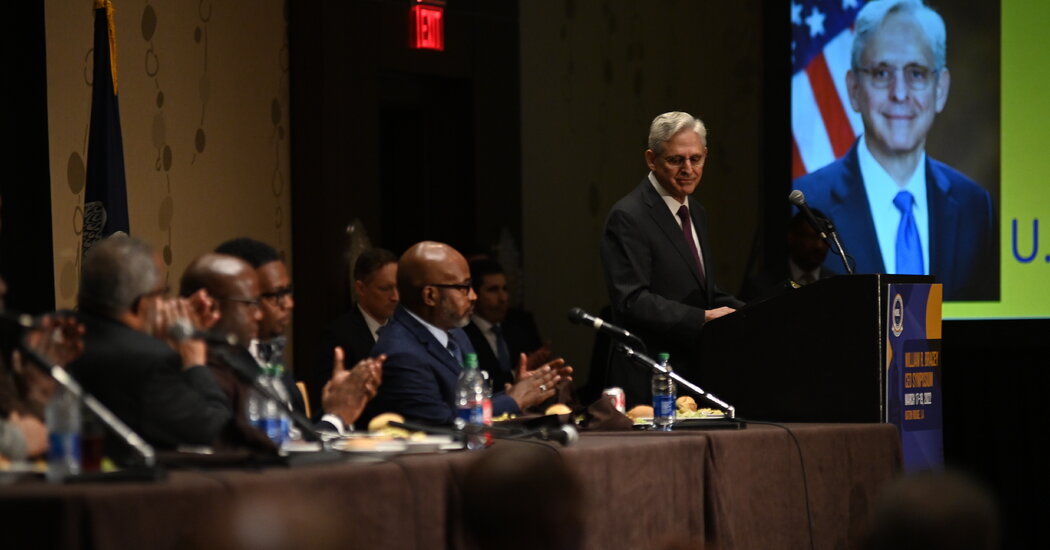 BATON ROUGE, La. — Attorney General Merrick B. Garland said on Friday that the Justice Department would increase the training and other services it offered to local law enforcement agencies seeking to address policing problems, such as the use of excessive force, officer-involved shootings and police bias.

The revamped program, called the Collaborative Reform Initiative for Technical Assistance, “is designed to transform a law enforcement agency’s operations and its relationship with the community,” Mr. Garland said at a conference in Baton Rouge hosted by the National Organization of Black Law Enforcement Executives.

Mr. Garland unveiled the revised program after bipartisan negotiations over policing overhaul legislation collapsed in Congress, leaving the White House to work on an executive order on the issue.

And as the administration tries to balance its promises to address police misconduct with supporting law enforcement amid an increase in violent crime in some cities, the Justice Department has emerged as a key figure.

The agency is investigating police departments in cities such as Minneapolis and Louisville, Ky. At the same time, it was among several voices pushing the White House to incorporate more thinking from policing groups in drafting its executive order. The order has not yet been issued.

The initial version of the Collaborative Reform Initiative was introduced during the Obama administration. Under the Trump administration, the attorney general at the time, Jeff Sessions, scaled back certain aspects of it. He said that the program had become too broad and onerous, and he decided that it would no longer audit police departments that participated in such Justice Department programs, focusing instead on helping the police fight violent crime.

The latest iteration of the program, developed over the past several months, includes three initiatives intended to build “collaboration, trust, and legitimacy” between law enforcement agencies and their communities, Mr. Garland said.

One initiative is a center created in 2017 that provides targeted technical assistance on more than 60 topics, such as officer safety and wellness, gun violence reduction and community engagement. Last year, the program worked with 171 law enforcement agencies to create specific plans of action.

The second initiative is also a continuation of an existing program, which helps law enforcement agencies that are grappling with a high-profile event, like a controversial killing of a civilian by a police officer. It offers tools such as after-action reviews, data analysis and recommendations for change.

The program “will be offered as a way for the Justice Department to support your work. Not add to it,” Mr. Garland said.

The third initiative restores and revises a model that Mr. Sessions had scaled back. The program offers in-depth assessments of systemic issues that a police department may face, such as bias in policing or the routine use of excessive force.

This was the “most intensive piece” of the new model, Mr. Garland said, adding that the latest iteration addressed criticisms that had been shared with the Justice Department.

Law enforcement agencies disliked that the Justice Department had focused on creating a comprehensive report at the end of an assessment rather than offering continuing communication and guidance. And they said that many of the recommendations were often difficult to put into practice.

Now the program will press for improvements “with timely, ongoing and actionable guidance,” Mr. Garland said, and will provide technical assistance so that police departments can “accomplish reforms as they are identified.”