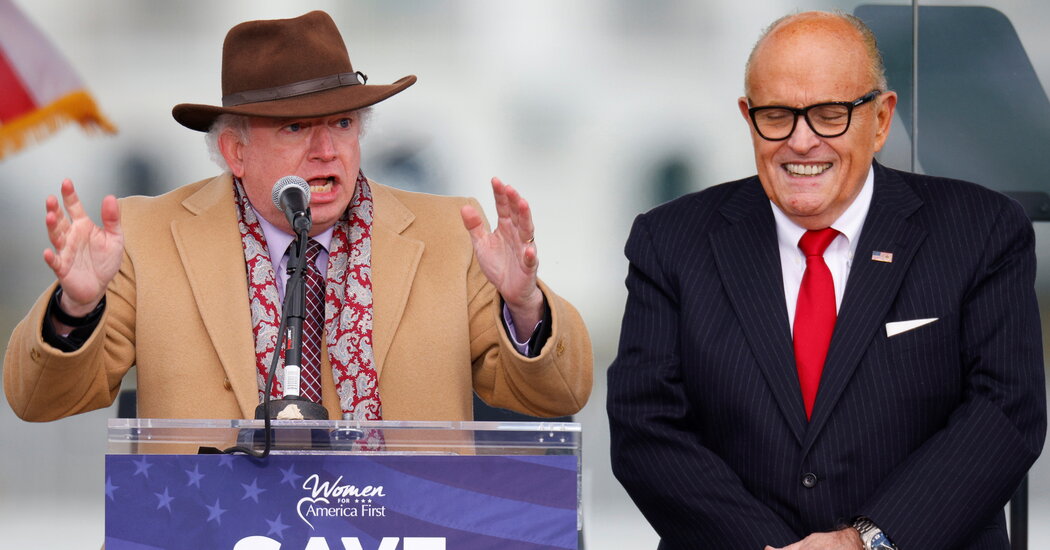 WASHINGTON — A federal judge said on Wednesday that he would review 111 emails that the lawyer John Eastman, an ally of former President Donald J. Trump, is attempting to keep from the House committee investigating the Jan. 6 Capitol attack, as the panel works to force the release of documents from lawyers involved in plans to overturn the 2020 election.

Judge David O. Carter, of the United States District Court for the Central District of California, said in an order that he would review emails Mr. Eastman had sent and received between Jan. 4 and Jan. 7 of last year as he decides whether to release them to the committee.

Judge Carter made no mention of the committee’s most explosive argument in the case: that Mr. Eastman’s emails are not protected by attorney-client privilege because they were part of a criminal conspiracy.

“Ultimately, the court will issue a written decision including its full analysis and its final determination of which, if any, documents must be disclosed to the Select Committee,” the judge wrote.

The committee in recent weeks has issued subpoenas to lawyers, including Rudolph W. Giuliani and Sidney Powell, who worked closely with Mr. Trump as they pursued various efforts to keep the former president in power despite losing the election. They offered up false slates of electors claiming Mr. Trump had won politically competitive states that he had lost, and explored the seizure of voting machines.

Among the group of lawyers working on behalf of Mr. Trump was Mr. Eastman, who the committee says could potentially be charged with criminal violations including obstructing an official proceeding of Congress and conspiracy to defraud the American people.

Before the attack on the Capitol, Mr. Eastman wrote a memo that some in both parties have likened to a blueprint for a coup. The document encouraged Vice President Mike Pence to reject electoral votes from swing states won by President Biden, even as Mr. Eastman privately conceded that the maneuver was likely illegal, the committee said.

The arguments were prompted by a suit Mr. Eastman had filed against the committee, attempting to block its subpoena. The committee responded that under the legal theory known as the crime-fraud exception, the privilege does not cover information conveyed from a client to a lawyer if it was part of furthering or concealing a crime.

Charles Burnham, Mr. Eastman’s lawyer, argued that neither Mr. Eastman nor Mr. Trump had committed a crime because they genuinely believed the claims of a stolen election — despite being told repeatedly that such statements were false — as they worked to try to keep Mr. Trump in power.

The judge’s decision came as two more lawsuits were filed against the committee, bringing to at least 21 the total of potential witnesses or organizations who have sued to trying to block the panel’s efforts to collect information from or about them.

One suit, filed by former Trump adviser Stephen Miller, sought to block the committee from accessing his phone records, arguing in part that the panel is invading his parents’ privacy since he is on their family plan.

A second was filed by the Republican National Committee, which said one of its vendors, Salesforce.com, had received a subpoena from the committee that it called “overly broad” and sought “nonpublic information on Republican donors, volunteers, and supporters and the internal deliberative processes of the RNC.”

The committee has been investigating how Mr. Trump’s campaign and the Republican Party raised hundreds of millions of dollars from donors while making the false claim that the election had been stolen.

“The Select Committee’s fishing expedition would only serve to chill the RNC’s and its supporters’ First Amendment rights, while providing their political opponents with an all-access pass to confidential RNC political strategies and the personal information of millions of its supporters,” the suit states. “Worryingly, the information targeted is universally for persons opposed to the political party in control of the U.S. House of Representatives and the Select Committee.”

The committee denied that its subpoena seeks the private information of voters or donors.

“The Select Committee issued a subpoena to an email fund-raising vendor in order to help investigators understand the impact of false, inflammatory messages in the weeks before Jan. 6, the flow of funds and whether contributions were actually directed to the purpose indicated,” said Tim Mulvey, a spokesman for the committee. “This action has absolutely nothing to do with getting the private information of voters or donors.”