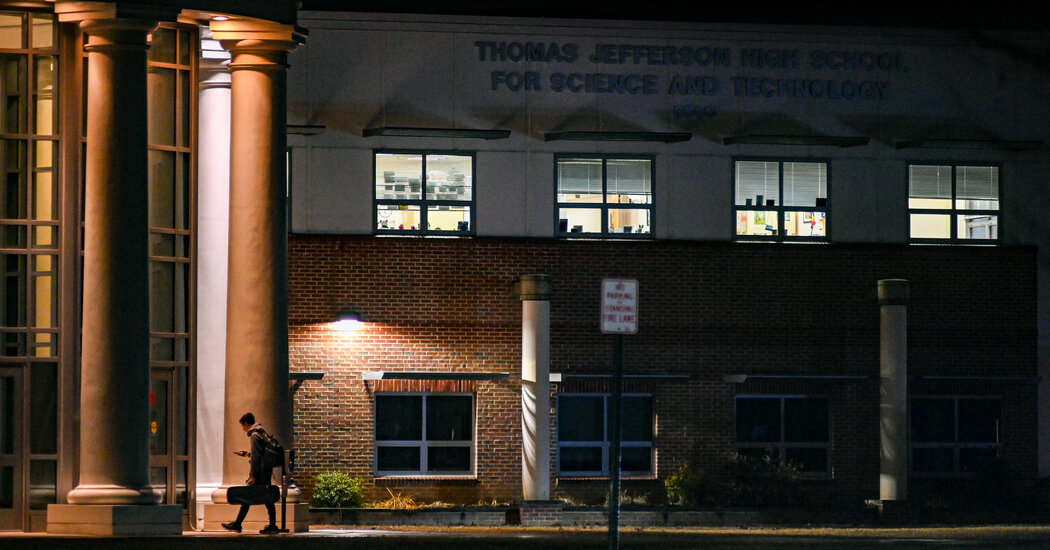 In an email to the T.J. community, the school principal, Ann Bonitatibus, wrote that “we each have a responsibility to our community to speak up and take actions that counter racism,” adding that the T.J. community did “not reflect the racial composition” in Fairfax County’s public schools.

Over the next few months, the Fairfax County School Board considered a variety of changes to the admissions process in a series of meetings that the Coalition for TJ said were rushed and lacked transparency — an argument the judge ultimately agreed with. In October, the board voted to do away with the standardized testing requirement, immediately drawing the objections of parents, many of whom had paid significant sums for test preparation courses, and alumni who thought this would weaken the school’s reputation as a rigorous academic powerhouse.

In December, the board approved the new admissions process, which in addition to guaranteeing eligibility to students at every middle school in the school system, added four “experience factors,” such as whether students were economically disadvantaged or in the process of learning English.

The school argued in court that the factors it was intent on addressing included many things other than race — following the changes, for example, the percentage of economically disadvantaged students grew from less than 1 percent to over a quarter of the incoming class. But Judge Hilton, who was appointed by President Ronald Reagan, was not convinced, arguing that internal emails and messages, as well as the racial data that board members consulted, “make clear that diversity primarily meant racial diversity.”

The school board could have achieved that by other measures, such as expanding the size of T.J.’s student body or offering free test prep courses, he wrote. But the policy the school devised “to increase Black and Hispanic enrollment,” he wrote, “would, by necessity, decrease the representation of Asian Americans.”

Julia McCaskill, who has three daughters in Fairfax County schools — two of them at T.J. — said parents gathered outside the school following Judge Hilton’s ruling, holding a small celebration despite the cold.

“We’re just very happy,” said Ms. McCaskill, who is Chinese American and had been involved in the litigation. “We feel that common sense prevailed because the school can deny it’s about race, but it sounds like it’s race.”