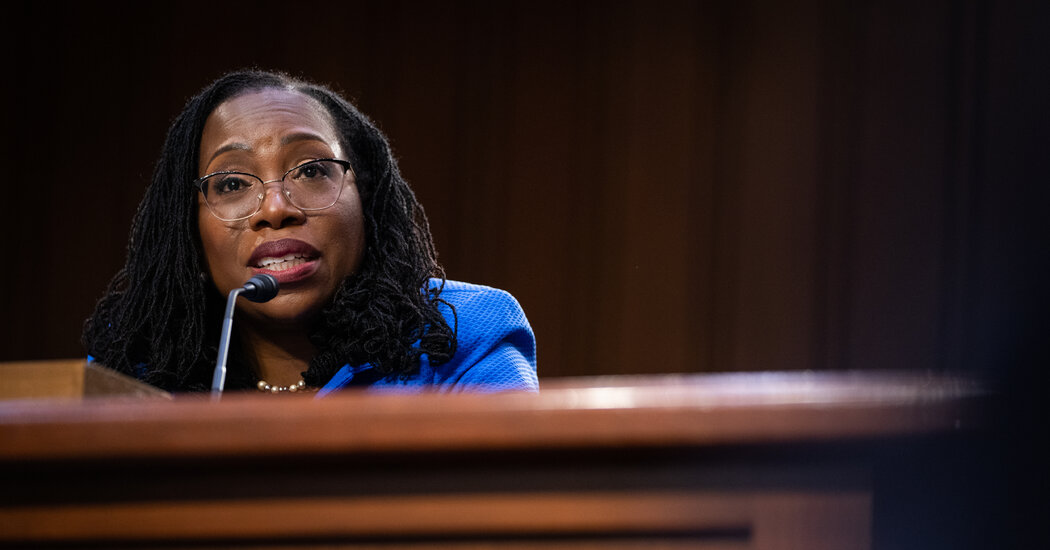 In pressing his attack, Mr. Hawley dug into the details of the Hawkins case, running through a disturbing tally of the sex acts, violence and abuse that was portrayed in what he claimed were more than 600 videos and images the authorities found on Mr. Hawkins’s computer. According to court papers, however, Mr. Hawkins downloaded 16 images and 17 videos, the latter of which were technically counted as 75 images each.

When Mr. Hawley asked Judge Jackson if the case reflected “a heinous or egregious” offense, she agreed with some exasperation that it did, but she also noted that judges consider many factors in deciding how long people should go to prison.

“Sentencing is a discretionary act of a judge, but it’s not a numbers game,” she said.

The line of questioning pursued by Mr. Hawley and other Republicans appeared to have some echoes of the QAnon conspiracy theory. Many of its followers believe baseless assertions that elites, including top Democrats, are child traffickers and pedophiles.

Andrew C. McCarthy, a conservative former federal prosecutor, defended Judge Jackson in an essay for National Review, saying that while he did not support her nomination, Mr. Hawley seemed to be misleadingly conflating “sex offenders,” who consume offensive imagery, with criminals who “prey on children” through acts of sexual violence.

The allegation that Judge Jackson had shown “an alarming pattern” of being soft on “sex offenders, especially those preying on children,” as Mr. Hawley put it, “appears meritless to the point of demagoguery,” Mr. McCarthy wrote.

According to ABC News, Mr. Hawley himself has voted to confirm at least three federal judges who also handed down sentences in cases involving images of child sexual abuse that were lighter than what the federal guidelines recommended. The guidelines are advisory, and as some Democrats on the Senate Judiciary Committee pointed out, federal judges considering cases involving child sexual abuse imagery often issue sentences far less severe than what the guidelines suggest.

The Hawkins case began in 2012 when Mr. Hawkins, who was then in high school, started downloading pornographic images from the internet and, according to his lawyer, felt “confusion and shock rather than arousal.”