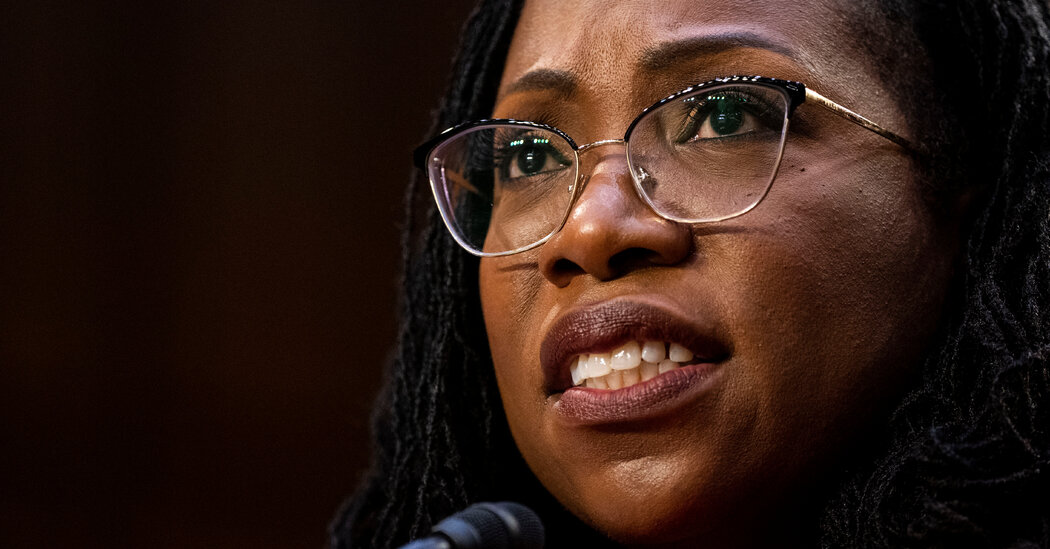 WASHINGTON — Judge Ketanji Brown Jackson alternated between two kinds of answers on her first day of facing questions at her Supreme Court confirmation hearing on Tuesday. On legal issues, she was opaque and noncommittal, emphasizing the limits of the judicial role.

But on more concrete matters, she was direct and even impassioned. She talked forcefully about the terrible and lasting trauma caused by the sexual abuse of children, the fraught aftermath of the terrorist attacks on Sept. 11, 2001, and the crucial role criminal defense lawyers play in upholding constitutional values.

That two-step helped neutralize some of the lines of attack developed by Republicans since President Biden announced Judge Jackson’s nomination last month: that she would let politics play a role in her work on the Supreme Court and that aspects of her professional background indicated that she was out of the legal mainstream.

In the legal realm, she insisted that she had no judicial philosophy but only what she described as a methodology bordering on the robotic, one that considered the parties’ submissions and then applied the relevant law to the facts in the record.

Before she applied that methodology, she said, “I am clearing my mind of any preconceived notions about how the case might come out and setting aside any personal views.”

The statement was reminiscent of something Justice Clarence Thomas said at his confirmation hearing in 1991. He asserted that he would have no agenda on the bench and would approach cases “stripped down like a runner.”

Justice Thomas went on to become the most conservative member of the current Supreme Court. And there is little doubt that Judge Jackson, if she is confirmed, would generally vote with the court’s liberal members.

That would maintain the court’s lopsided conservative majority, with its six Republican appointees dominating its three Democratic ones.

If judging were truly merely the process of clearing the decks and applying the law to the facts, confirmation hearings would not be the partisan battlegrounds they have become. But Judge Jackson did not give even the whisper of a hint that politics, policy, ideology, personal preferences or even a judicial philosophy play a role in judging a case.

When she described her actual work as a trial judge, a different side of her emerged. She emphasized, for instance, that “it is important to me to make sure that the children’s perspective, the children’s voices, are represented in my sentencings” of people convicted of possessing images of child sexual abuse.

“There is only a market for this kind of material because there are lookers,” she recalled telling defendants, one of whom wept. “You are contributing to child sex abuse.”

Judge Jackson described victims who ended up abusing drugs or becoming prostitutes. One, she said, “cannot leave her house because she thinks that everyone she meets will have seen her pictures on the internet — they’re out there forever — at the most vulnerable time of her life.”

That was one of several vivid moments in which Judge Jackson broke from the usual conventions of confirmation hearings, which are generally sterile and bland.

Recalling the “tragic attack” on Sept. 11, she said, “We could not let the terrorists win by changing who we were fundamentally.”

“And what that meant,” she said, “was that the people who were being accused by our government of having engaged in actions related to this under our constitutional scheme were entitled to representation.”

She firmly rejected the charge that her work as a federal public defender indicated she was soft on crime, noting that her brother and two uncles had worked in law enforcement.

“As someone who has had family members on patrol and in the line of fire,” she said, “I care deeply about public safety.”

To the extent she discussed constitutional interpretation, she appeared to embrace originalism, which relies on the original public meaning of the Constitution at the time of its adoption.

“The Supreme Court has made clear that when you are interpreting the Constitution, you’re looking at the text at the time of the founding and what the meaning was then as a constraint on my own authority,” she said. “And so I apply that constraint. I look at the text to determine what it meant to those who drafted it.”

In response to questions about Roe v. Wade, the 1973 decision that established a constitutional right to abortion, Judge Jackson echoed statements by former President Donald J. Trump’s three appointees, Justices Neil M. Gorsuch, Brett M. Kavanaugh and Amy Coney Barrett. Like them, she said Roe was an established precedent, meaning that it should be overruled only if the demanding requirements of the doctrine of “stare decisis” are met.

Under that doctrine, Latin for “to stand by things decided,” courts consider factors like whether the precedent was egregiously wrong, whether it has proved unworkable, whether it has been undermined by later decisions and the extent to which people have come to rely on it.

When a challenge to Roe was argued in December, Justices Gorsuch, Kavanaugh and Barrett appeared open to limiting or overruling it.

Like other recent nominees, Judge Jackson declined to answer a variety of questions.

She would not say whether she supported or opposed enlarging the size of the Supreme Court even after being reminded that Justice Stephen G. Breyer, whom she hopes to replace, and Justice Ruth Bader Ginsburg, who died in 2020, had spoken out against the idea. “I am particularly mindful of not speaking to policy issues,” she said, “because I am so committed to staying in my lane of the system.”

Nor would she take a position on camera coverage of the court’s arguments, something earlier nominees had said they tended to favor.

Justice Breyer, for whom Judge Jackson served as a law clerk, has written and spoken approvingly about the role foreign and international law can play in the work of American courts. Judge Jackson declined to endorse that position.

“There are very, very few cases, I think, in which international law plays any role and certainly not in interpreting the Constitution,” she said.

Asked about calls from Justices Thomas and Gorsuch to reconsider New York Times v. Sullivan, the 1964 decision that said the First Amendment limited the ability of public officials to sue for libel, Judge Jackson recited the various criteria for overruling precedents. She did not say how she would apply them.