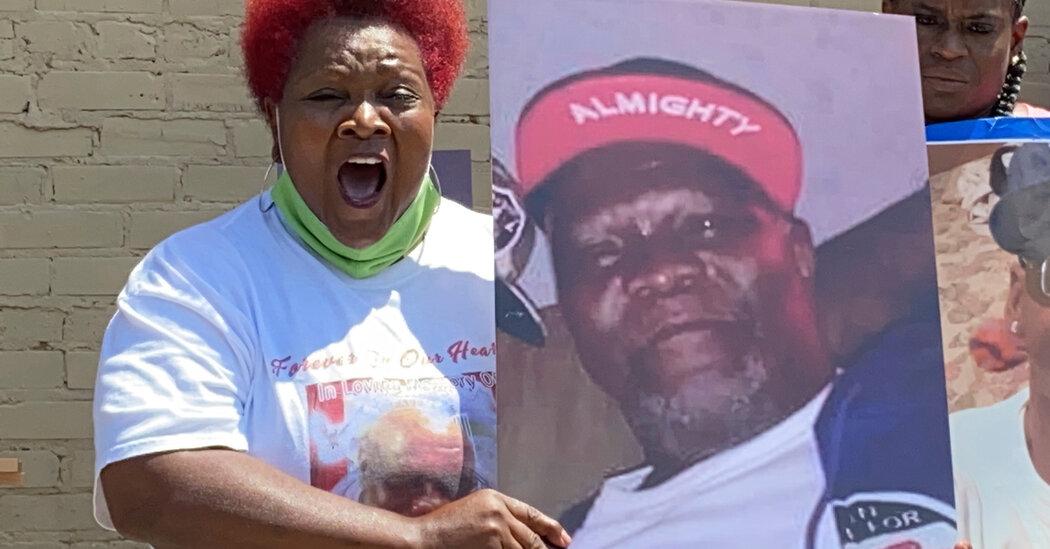 A judge in Mississippi on Thursday dismissed second-degree murder charges against two police officers who were accused last year of body-slamming and then beating a 62-year-old man, prosecutors said.

The judge, E. Faye Peterson of Circuit Court in Hinds County, Miss., found that prosecutors had not presented sufficient evidence to send the case against the officers, Desmond Barney and Lincoln Lampley, to a jury. She directed that verdicts of not guilty be entered in both of their cases, court records show.

“There is nothing on its face to show that there was anything illegal about them performing their duty,” Judge Peterson said.

Officers Barney and Lampley, along with a third officer, Anthony Fox, were indicted last August in the death of George Robinson of Jackson, Miss.

Prosecutors said they planned to move forward with the case against Officer Fox, who will be tried separately before another judge in September.

“We still are very much committed to justice for George,” said Jody E. Owens II, the district attorney in Hinds County.

Prosecutors said the officers had seen Mr. Robinson sitting in his car on Jan. 13, 2019, when they were canvassing a predominantly Black neighborhood in Jackson after a pastor was fatally shot outside his church.

The officers, who are Black, approached Mr. Robinson, who was also Black, because they believed they had seen him dealing drugs, prosecutors said.

All three officers, who were members of the Jackson Police Department, were charged in an indictment with pulling Mr. Robinson from his car, throwing him headfirst onto the pavement and then striking and kicking him multiple times on the head and the chest.

Mr. Owens said an autopsy report had found that Mr. Robinson died of blunt-force trauma to the head, and an independent medical examiner’s report had indicated that the cause of death was homicide.

Mr. Owens said 12 witnesses had testified in the trial, and three of them said that officers had body-slammed Mr. Robinson. He said he was “surprised and disappointed” that the case had been dismissed.

“We disagree with the court’s ruling and are of the opinion that the jury should have been allowed the opportunity to determine the defendants’ fate,” Mr. Owens said in a statement. “We pray for George Robinson and his family that they can reach some kind of peace.”

Francis Springer, Officer Lampley’s lawyer, said the injuries to Mr. Robinson did not support the allegation that he had been body-slammed. He said his client was relieved that the charges had been dropped.

“He never lost faith that this would be the outcome, but he was glad when it got there,” Mr. Springer said.

Michael Cory, who represented Officer Barney, said he was not surprised that the judge had ended the trial before the defense had presented its first witness.

Mr. Robinson’s sister, Bettersten Wade, said she was very upset at the possibility that no one would be held accountable for her brother’s death. She said her brother had died on her birthday.

“So every time my birthday comes up, what do I have to think about?” she said. “They left me with a brother that’s in the ground, and I can’t even see him.”

After Mr. Robinson’s death, Officers Barney and Fox were hired by the Police Department in nearby Clinton, Miss., according to that city’s mayor, Phil Fisher. Mr. Fisher said on Thursday that both were still employed by the department.

“The City of Clinton is thankful that Officers Desmond Barney and Lincoln Lampley were exonerated today when Judge Faye Peterson entered a directed verdict in their favor,” Mr. Fisher said. “The City would like to commend Judge Peterson for her integrity and wisdom in these proceedings.”

Mr. Fisher added that the city continued to support the officers “and looks forward to Officer Anthony Fox’s exoneration in the future.”