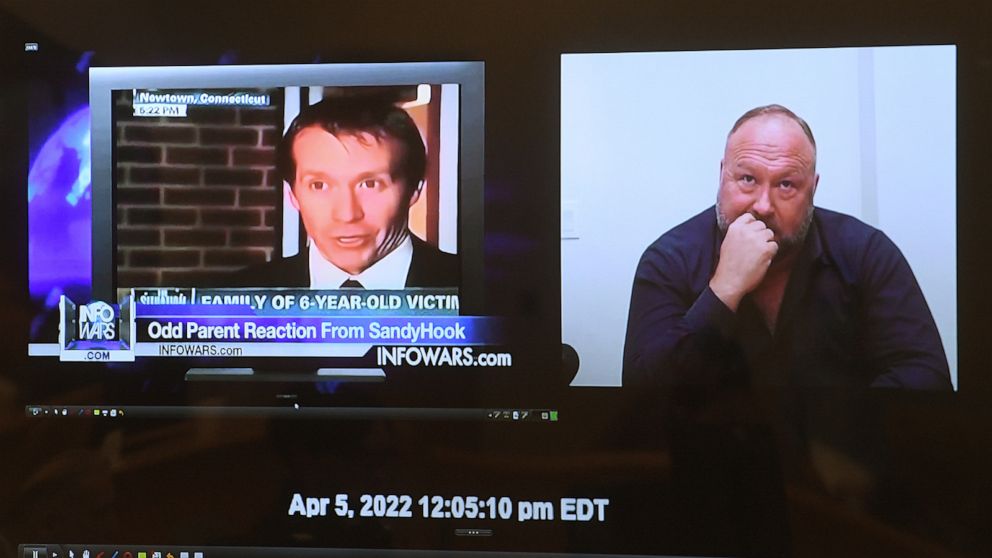 WATERBURY, Conn. — The father of a boy killed at the Sandy Hook elementary school tried Tuesday to describe for a jury the distress he felt when he learned conspiracy theorists planned to dig up his 7-year-old son’s grave to prove the mass shooting never happened.

Mark Barden, whose son Daniel was among the 26 victims, was the final family member to testify at a trial to determine how much Infowars host Alex Jones should pay for fueling a bogus theory that the massacre was a hoax.

“This is so sacrosanct and hallowed a place for my family and to hear that people were desecrating it and urinating on it and threatening to dig it up, I don’t know how to articulate to you what that feels like,” Barden told the jury. “But that’s where we are.”

Jones, who argued outside the courthouse that he has never been linked to threats against the families, was initially expected to re-take the stand Wednesday in the civil trial. But his attorney indicated his client was heading home and the defense would call no witnesses.

A judge last year found Jones liable by default for spreading lies about the massacre that harmed the plaintiffs in the lawsuit, who include the parents and siblings of some victims. The six-member jury is now deciding how much Jones and Free Speech Systems, Infowars’ parent company, should pay for defaming them and intentionally inflicting emotional distress.

The plaintiffs attorneys said they planned to rest their case Wednesday after about 20 minutes of video testimony.

Barden and his wife, Jackie, were among 15 family members to take the stand in the defamation trial, which is being held in Waterbury, about 20 miles (32 kilometers) from the site of the school shooting in Newtown.

Those witnesses have testified over several days about receiving death and rape threats, mail from conspiracy theorists that included photos of dead children, and in-person confrontations with people telling them their children or wives or mothers never existed and that they are “crisis actors.”

Jackie Barden testified Tuesday that the hoax believers started harassing them in the weeks after the massacre and terrified her family. Mark became nervous about his surroundings and family’s safety, she said. And their daughter, now a 20-year-old college student, has anxiety and fears being alone in the family’s home.

“It’s terrible to think that your 20-year-old daughter is afraid,” she said.

Francine Wheeler, whose son Ben was killed, recounted an exchange with another shooting victim’s mother at a conference on gun violence in which that woman called her a liar.

She told the jury it has been hard enough to live with the death of her son.

“It’s quite another thing when people take everything about your boy, who is gone, and your surviving child and your husband and everything you ever did in your life that is on the Internet and harass you and make fun of you,” she said.

Relatives said the harassment has not stopped in the nearly 10 years since the shooting.

Jones testified earlier in the trial — a contentious appearance in which he called an attorney for the victims families an ambulance chaser and said he was “done saying I’m sorry,” for saying Sandy Hook was a hoax.

His lawyers had earlier indicated they would call him back to the stand Wednesday to bolster his arguments that the damages awarded to the plaintiffs should be minimal.

But in a sidebar with the judge Tuesday, Jones’ attorney, Norm Pattis said his client was leaving Connecticut and had no plans to testify, though he couldn’t say for sure.

“What if (Jones) calls me tonight and says, ‘I’ve changed my mind,’” Pattis said during a sidebar with the judge and the plaintiffs attorneys. “What then?”

Earlier in the day, Jones told reporters outside the courthouse that he believed that if he said what he wanted to during his testimony, the judge might hold him in contempt of court.

“Not because I’m guilty,” Jones said, “but because she said that if I tell the truth, she’ll put me in the Waterbury jail for sixth months. That’s what she can do.”

Because Jones has already been found liable, the judge has sought to limit his testimony before the jury, saying he can’t argue, for example, that his statements were protected free speech. Jones was found liable without a trial by the judge after he repeatedly violated court orders to share financial documents with the plaintiffs.

Jones in recent years has acknowledged the shooting happened, but claims the families are being used to push a gun-control and anti-free speech agenda.

In a similar trial last month in Austin, Texas, home to Jones and Infowars, a jury ordered him to pay nearly $50 million in damages to the parents of one of the children killed in the shooting, because of the hoax lies. A third such trial in Texas involving two other parents is expected to begin near the end of the year.