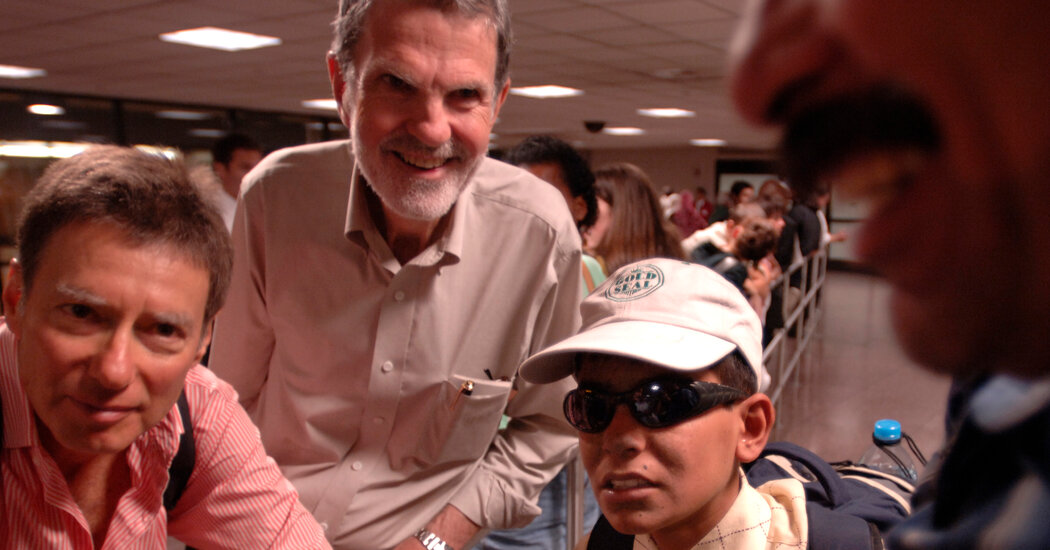 Joe Tom Easley, the gay rights activist and lawyer who worked to repeal the military’s “don’t ask, don’t tell” policy and whose 2003 wedding was among the first same-sex unions announced in The New York Times, died on Feb. 13 at a hospital in Miami Beach. He was 81.

The cause was complications of lung disease, Mr. Easley’s husband, Peter Freiberg, said on Tuesday.

Mr. Easley, who served in the Navy during the Vietnam War, spent years fighting for the repeal of “don’t ask, don’t tell,” which was enacted in 1993 by President Bill Clinton and allowed gays to serve in the military under the condition that they keep their sexuality a secret. In 2010, President Barack Obama signed away the policy.

Mr. Easley was a chairman of the Servicemembers Legal Defense Network, a group that sought to end discrimination against gay military personnel and to repeal the “don’t ask, don’t tell” policy.

Joe Tom Easley was born on Sept. 28, 1940, in Robstown, Texas, to Tom Lee Easley and the former Lady Hampton. He grew up in Truby, Texas, in the 1940s and ’50s, when being openly gay was far from commonplace.

In 1966, when he was drafted into the Vietnam War, Mr. Easley decided to enter the Navy, where he served at an intelligence base on the Adak Island in Alaska. After a year, he was told that a friend who had propositioned him for sex before he joined the service had told the government that he was gay, Mr. Freiberg said.

According to Mr. Freiberg, Mr. Easley’s commander told him that he had to kick him out because gays were barred from serving, but that “because of his exemplary service,” he would ensure that Mr. Easley received an honorable discharge and veteran benefits.

A graduate of Texas A&M, Mr. Easley received a law degree from the University of Texas and a master’s degree in public health from Yale.

Although he was almost 38 when he came out, he sought to make up for lost time with his gay activism by using his skills as a speaker, teacher and leader, Mr. Freiberg said.

After working in Europe for three years for a consumer watchdog organization that investigated price-fixing by pharmaceutical companies, Mr. Easley moved to Washington, D.C., where he lived in the late 1970s and early ’80s, according to his husband.

Mr. Easley was initially hired as a tenured law professor at American University. After he came out in 1978, he was appointed in an assistant dean in addition to his teaching duties. He was later a professor at what was then the Antioch School of Law, where he served as an adviser to an L.G.B.T. student group.

He also became president of the Gertrude Stein Democratic Club, a gay political organization in the Washington area.

Mr. Easley eventually left Washington for New York, when he met Mr. Freiberg and he continued his advocacy work.

From 1983 to 1987, Mr. Easley was a chairman of the Lambda Legal Defense and Education Fund, an L.G.B.T. group. He then served as president of the Human Rights Campaign Foundation.

Vic Basile, a former executive director of the Human Rights Campaign, said in an email that Mr. Easley was “instrumental in shaping its goal of electing L.G.B.T. supportive candidates to Congress.”

On Aug. 24, 2003, less than a year after Daniel Andrew Gross and Steven Goldstein broke ground as the first same-sex couple to have an announcement of their civil union published in The New York Times, Mr. Easley and Mr. Freiberg’s marriage, at Toronto City Hall, was featured in the paper’s wedding pages.

Mr. Freiberg, who is Mr. Easley’s only immediate survivor, was described in the announcement as a freelance writer and editor. Mr. Easley was described as a lecturer for the BAR-BRI Bar Review, a company that prepares prospective lawyers for bar examinations.

Two years later, Mr. Easley gained national attention when he appeared in a front-page article in The Times about sponsoring an Iraqi boy who was burned and blinded in one eye after stepping on a cluster bomb. Mr. Easley worked for more than a year to bring the boy to the United States for medical treatment.

He lined up a roster of eye surgeons and dermatologists to treat the boy at no cost.

“People ask me why this boy, why help him, when there are so many others worse off,” Mr. Easley said in an interview at the time. “I tell them, well, I don’t know about the other boys. But I do know about Ayad.”