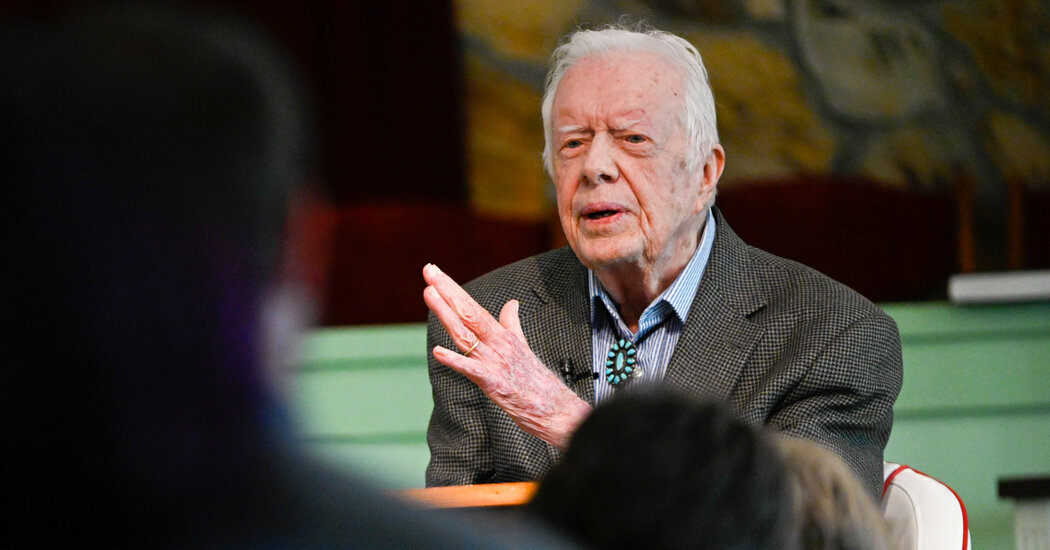 The list of announcements at the Maranatha Baptist Church in Plains, Ga., on Sunday included some routine business. There was a reminder of a deacons’ meeting immediately following the service and a request for donations of macaroni and cheese for a local food bank.

Then the pastor said he had one additional announcement to share, and it was good news: Jimmy and Rosalynn Carter were back.

The former president, 96, and his wife, 93, had returned to the church to worship in person for the second Sunday in a row, now that both had received vaccinations against the coronavirus, the pastor, Tony Lowden, said.

“Let’s welcome them back,” Pastor Lowden told the congregation, according to a video of the service posted on the church’s Facebook page. The Carters, wearing masks, waved from their familiar spot in the front pew, acknowledging applause from the church.

Pastor Lowden gently reminded the members that if they “get tackled” by the Secret Service when approaching the Carters, it would only be because the church was practicing social distancing.

The Carters have long been devoted members of Maranatha Baptist — she as a deacon, and he as a deacon and, for many years, a Sunday school teacher.

The Sunday school classes, which he no longer teaches, for decades drew Democratic presidential candidates and visitors from across the country, who made pilgrimages to hear the former president teach at the church in the tiny southwest Georgia farming community where he was raised.

Mr. Carter switched his membership to the church in 1981, joining it after it expressed a welcome to Black members.

In the four decades since he left the White House, Mr. Carter has built a remarkable post-presidential legacy with his work promoting human rights, combating poverty and writing numerous books. In 2002, he was awarded the Nobel Peace Prize.

In recent years, however, he has experienced a series of health problems.

In 2015, he announced that he had been given a diagnosis of a spreading cancer. Later that year, Mr. Carter announced that he was cancer free after undergoing treatment for metastatic melanoma that had spread to his brain.

In 2019, Mr. Carter underwent surgery for a broken hip after a fall at his home, and needed stitches above his brow later that year after another fall. More recently, he announced that he would not travel to Washington to attend the inauguration of President Biden and Vice President Kamala Harris.

Maranatha Baptist said on Facebook that the Carters’ return to the church would be accompanied by a set of strictly enforced rules.

In addition to enforcing social distancing, the church said masks would be required at all times — “no exceptions” — temperature checks would be conducted at the door, and capacity would be capped at 30 percent, or 90 people.

Guests will be required to make reservations, and anyone entering the building will be checked by the Secret Service, the church said.

“We understand this is an exciting time for everyone,” the church said, adding that the rules “will keep everyone as safe as possible, both members and guests.”