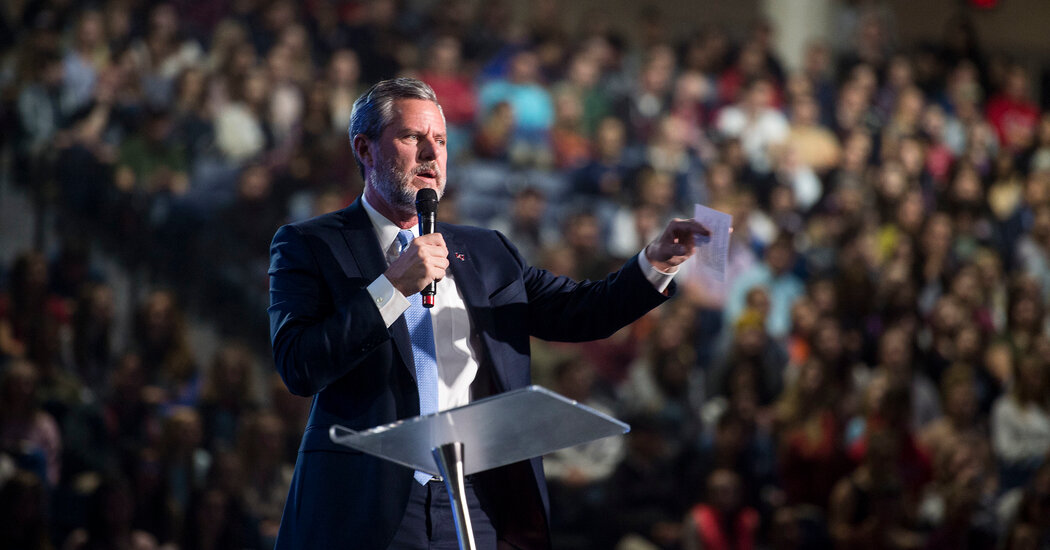 The leadership of Jerry Falwell Jr., one of the most prominent evangelical supporters of President Trump, appeared to be nearing an end at Liberty University after a report emerged on Monday of sexual indiscretions involving Mr. Falwell, his wife and a pool attendant.

Top officials at Liberty, which Mr. Falwell helped build into a hugely influential, $1.6 billion center of evangelical power, were seeking to finalize the terms of Mr. Falwell’s departure as the university’s president and chancellor.

The situation was confusing on Monday night, with a school spokesman telling news organizations that Mr. Falwell had resigned, Mr. Falwell denying those reports, and an official with knowledge of the behind-the-scenes drama asserting that the terms were still being negotiated.

“Falwell has not yet resigned but he’s in negotiations with the school over his future,” said a person who was in touch with key players in the negotiations on Monday but was not authorized to speak on the record.

On Monday evening Mr. Falwell told Virginia Business, a local monthly magazine, that reports of his resignation were “completely false” and that he did not plan to step down.

It was clear that Mr. Falwell’s support had eroded.

Late on Monday evening, the university released a statement saying that Mr. Falwell had initially agreed to resign before reversing course. His actions came after the board’s executive committee met on Monday morning.

“Falwell responded by agreeing to resign immediately as President of Liberty University today but then instructed his attorneys to not tender the letter for immediate resignation,” the statement said. The executive committee and the full board plan to meet Tuesday.

“It’s a mess,” said Dustin Wahl, co-founder of Save 71, a new Liberty alumni group calling for Mr. Falwell’s resignation. “This is how Liberty works, and this is how Liberty has worked for the past several years. Falwell is not in line with the rest of the leadership at Liberty. He’s an outlier. And he’s responsible for the chaos.”

Mr. Falwell has been on a leave of absence since Aug. 7, after an uproar over a photograph he posted to Instagram that depicted him with his pants partially unzipped and his arm around a woman he later said was his wife’s assistant.

On Monday, a business associate named Giancarlo Granda alleged in an interview with Reuters that for years he had regular sexual liaisons with Mr. Falwell’s wife, Becki, as Mr. Falwell looked on. He said he met the couple in 2012 while a young pool attendant at a luxury hotel in Miami.

In a statement released Sunday evening that appeared to anticipate the revelations, Mr. Falwell conceded that his wife had engaged in an “inappropriate personal relationship” with Mr. Granda, but said that he “was not involved.” He added that Mr. Granda tried to extort the couple to keep the affair a secret, an ordeal so upsetting that it had caused him to seek mental health treatment.

Mr. Falwell and Ms. Falwell did not respond to requests for comment.

The association with Mr. Granda first received attention in 2019 after reports emerged that years earlier, Mr. Falwell had asked Michael Cohen, a fixer for President Trump, for help suppressing photographs that would have embarrassed the family. Mr. Falwell announced his endorsement of Mr. Trump soon afterward, surprising advisers to Senator Ted Cruz of Texas, who had been expecting Mr. Falwell to support his campaign.

The end of Mr. Falwell’s tenure would mark the fall of a pugnacious leader who took over leadership of Liberty, one of the largest Christian colleges in the nation, one day after his father’s death in 2007.

Liberty has had a Falwell at its helm since Mr. Falwell’s father, a pastor with a taste for conservative politics, founded the school as Lynchburg Baptist College in 1971. Jerry Falwell Sr. aimed to turn the college into a national institution and football powerhouse, with the slogan “Champions for Christ.”

The younger Mr. Falwell appeared to fulfill his mission. The school now plays in the top division of college football, winning its first bowl game last year. Liberty reports an enrollment of more than 120,000 students, including 15,000 who attend classes on its expanding campus in Lynchburg, Va.

Mr. Falwell’s own national profile has risen dramatically since he endorsed Mr. Trump’s presidential bid in early 2016, before the Iowa caucus and significantly before most conservative evangelicals had warmed to him. He became one of the president’s most vocal evangelical supporters, speaking at the 2016 Republican National Convention and becoming a regular presence on Fox News.

His loyalty in turn has turned Liberty into a kind of institutional headquarters of Trumpism. President Trump delivered the commencement address at Liberty in 2017.

But even within conservative evangelicalism, Mr. Falwell has drawn increasing criticism for his sometimes crude behavior, especially on Twitter.

Last summer, he tweeted that David Platt, a respected Southern Baptist megachurch pastor, needed to “grow a pair.” He mocked Russell Moore, the influential head of the denomination’s Ethics and Religious Liberty Commission, as a “bureaucrat.” And he called a parent of a Liberty student a “dummy” for questioning his response to the coronavirus crisis in March.

Mr. Falwell’s explanation for his brash behavior was that he was a businessman trained as a lawyer, not a pastor or spiritual leader. “I have never been a minister,” he tweeted in 2019, adding, “While I am proud to be a conservative Christian, my job is to keep LU successful academically, financially and in athletics.” Liberty’s faculty handbook describes the president’s job as providing “spiritual and worldview leadership” to the school.

In the statement he gave The Washington Examiner on Sunday, Mr. Falwell described a family relationship with the pool attendant that began innocently when he and his wife met Mr. Granda on vacation. Mr. Granda was employed by the Fontainebleau Miami Beach hotel, and the Falwells were “impressed by his initiative” in pitching them a real estate opportunity, Mr. Falwell wrote. The family soon began socializing with Mr. Granda in Virginia.

Mr. Falwell’s statement depicts the affair between his wife and Mr. Granda as developing in the wake of the business partnership. Though it was painful for him to learn about the affair, he wrote, he has since forgiven Ms. Falwell and said their “love has never been stronger.” Jerry and Becki Falwell have been married since 1987.

The couple’s relationship with Mr. Granda deteriorated over the years. Mr. Falwell’s statement alleges that Mr. Granda became increasingly aggressive, threatening to publicly reveal the affair and fabricate claims about the family. “It was like living on a roller coaster,” Mr. Falwell wrote.

In his interview with Reuters, Mr. Granda denied trying to extort the couple, saying he was instead seeking a buyout from their business arrangement.

“The Falwells are attempting to get ahead of the story by creating a false narrative,” Mr. Granda said in a statement to The New York Times shortly before Reuters published his full account. “The truth is coming soon.”

Mr. Granda, now 29, graduated from Georgetown University this year with a master’s in real estate finance, according to his social media posts. Mr. Granda’s social media posts show he recently founded a company called Gaming Detox that tries to foster fitness among the video gaming community.

Mr. Falwell’s recent troubles began after he posted a photo on Instagram showing him with his pants partially unzipped and stomach exposed. He is holding a glass of dark liquid in the photo and joked in the caption that it was “just black water.”

Mr. Falwell quickly deleted the photo, which was taken at a family party on a yacht, but screenshots circulated widely. The photo attracted criticism in part because students at Liberty are forbidden from drinking alcohol and instructed to “dress modestly at all times.”

Liberty’s board of directors had confirmed Mr. Falwell’s paid leave of absence at a meeting on Friday. In a statement issued that day, the board said it had “decided not to publicly comment on the various rumors and claims about Falwell at this time.”

Jerry Prevo, a retired Alaska megachurch pastor and longtime board member, has been installed as the school’s acting president.

Mr. Prevo, who was close with Mr. Falwell’s father, is considered to be loyal to the family. Mr. Prevo’s initial statement about the leave of absence referred to the “substantial pressure” Mr. Falwell experienced as the school’s leader.