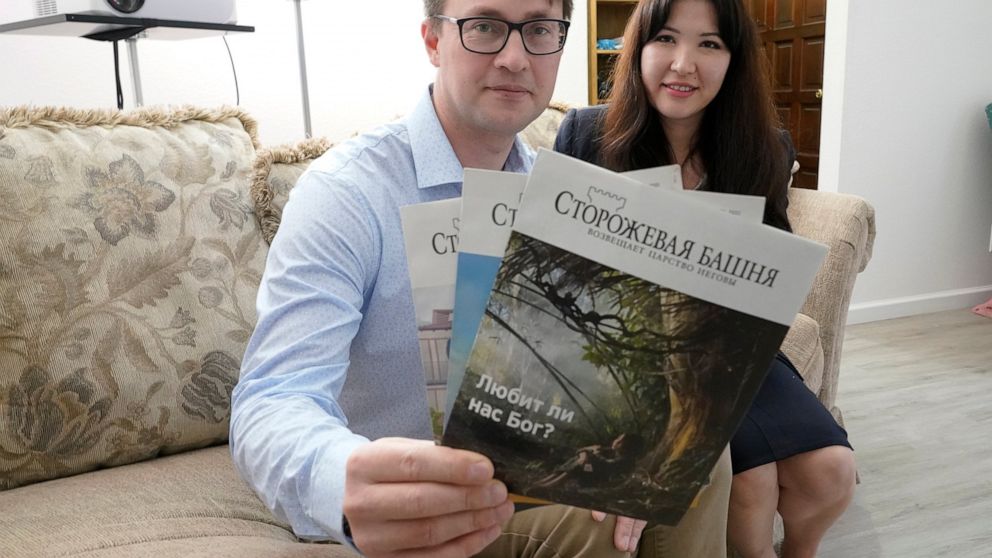 Over the past five years, hundreds of Jehovah’s Witnesses have been subjected to raids, arrests and prosecution in Russia. Many others have fled – including one couple, Dmitrii and Nellia Antsybor, who flew to Mexico last year, walked across the U.S. border to seek asylum, and now hope to build a new life for themselves in Washington state.

After entering the U.S., the couple were separated and sent to different immigration detention centers; Nellia in Arizona, Dmitrii in California. Nearly three months passed before they reunited in late February.

Yet despite that ordeal, and missing her twin sister and her mother left behind in Russia, Nellia welcomes her newfound freedom in Federal Way, a suburb of Seattle.

“It is nice to not be afraid to gather with our brothers and sisters even if it is via Zoom,” she said through a translator. “I have a sense of ease now.”

One new source of concern: Russia’s invasion of Ukraine.

“I am very worried about what’s happening with my brothers and sisters in that country,” Dmitrii said. “We pray for them.”

About 5,000 Witnesses in Ukraine have left, seeking protection in other countries, said Jarrod Lopes, a U.S.-based spokesperson for the Jehovah’s Witnesses.

For Witnesses in Russia – Lopes estimates there are about 170,000 of them – there’s been anxiety since the country’s Supreme Court declared the Christian denomination an extremist group in 2017.

Hundreds have been arrested and imprisoned. Their homes and places of worship, known as Kingdom Halls, have been raided, and the national headquarters seized. The Witnesses’ modern, Russian-language translation of the Bible has been banned along with its globally circulated magazines, Awake and Watchtower.

Nellia said she and Dmitrii had long been on the radar of authorities in the cities where they lived. They decided to flee, she said, after her mother called in October and said police had a warrant for their arrest.

“To be a Jehovah’s Witness in Russia is to be constantly in legal jeopardy, constantly in fear of either an invasion of your privacy, confiscation of your property, or in many cases, being locked up,” said Jason Morton, a policy analyst at the United States Commission on International Religious Freedom, a bipartisan federal agency that tracks religious freedom violations worldwide.

Last year, there were 105 guilty verdicts against Witnesses in Russia, according to the commission. The maximum sentences issued to them have increased from six to eight years

The Russian government has never given a detailed justification for the crackdown.

“I don’t think that there’s any reasonable person that can substantiate that the Witnesses are fundamentally extremists,” said Emily Baran, a Middle Tennessee State University history professor. She has studied Soviet and post-Soviet Witness communities.

It is a label that even Russian President Vladimir Putin described as “complete nonsense” when asked about it in 2018.

“Jehovah’s Witnesses are Christians, too, so I don’t quite understand why (they) persecute them,” he said.

Although Witnesses are Christians, they are guided by distinctive beliefs and practices, including the refusal of blood transfusions, abstinence from voting, conscientious objection to military service, and avoidance of participation in national ceremonies and holidays. Pre-pandemic, Witnesses engaged in door-to-door proselytizing, a key part of their faith.

Aside from Russia, Witnesses experience persecution in several former Soviet republics, including Turkmenistan, Kazakhstan and Tajikistan. One notable case is the imprisonment of a 70-year-old Tajik citizen, Shamil Khakimov, who received a seven-year sentence in 2019.

In Eritrea, where military conscription is mandatory, there are several Witnesses in prison. In South Korea, where most young men must perform military service, Witnesses were routinely imprisoned for refusing until a 2018 court decision affirmed their rights to conscientious objection.

The Witnesses “seem to really ruffle the feathers of your more authoritarian-minded governments who require a baseline of participation in the state,” Morton said. “The fact that they want to remain separate from some of the typical functions of celebrating the state or participating in certain state rituals puts them on the radar.”

The recent crackdown is not the first endured by Witnesses in Russia. During the Soviet era, they were deported to remote areas of Siberia. They often faced employment discrimination and lost custody of their children.

“They didn’t do the kinds of performative aspects of being part of Soviet life,” said Baran.

The denomination’s American origins put Witnesses under scrutiny during the Cold War, Baran said. “Because they were part of an international religious group, the Soviet Union thought this was evidence of a larger capitalist conspiracy.”

Nellia and Dmitrii decided to flee Russia after weeks of playing hide-and-seek with police officers and disguising their appearances to outwit security cameras.

“We figured that they would eventually find us,” Dmitrii said.

They left on a one-way flight from Moscow to the resort city of Cancun, Mexico. After a brief stay, they flew to the border town of Mexicali in December, then approached U.S. border agents to request asylum.

While in U.S. detention, the couple celebrated their 12th anniversary and Nellia continued her tradition of writing love poems to mark the occasion.

“I beg God that this time passes quickly and better times are ahead,” she wrote. “My beloved, wait for me, wait for me, and don’t be overly sad about me.”

Dmitrii said he studied tax law in Russia, but now hopes to be licensed as a truck driver – if he can avoid long hauls that would take him far from his wife. Nellia isn’t sure what job she might pursue.

The Antsybors are among many Witnesses – likely several thousand, according to Lopes — who have fled Russia since the crackdown began in 2017. Many have found refuge in other European countries.

Evgeniy Kandaurov fled Russia with his wife in August 2021 and has resettled in Germany. He said their home was raided by police officers in February 2021 with an officer of the internal intelligence agency giving orders remotely.

The officers took custody of bags of their belongings, including all but one wedding photo.

Kandaurov, whose father was a Communist, became interested in the Jehovah’s Witnesses after two years of army service. He was baptized in 1994 and became a “special pioneer”, expected to devote at least 130 hours each month to ministry work.

He traveled across Russia to advocate for the rights of Witnesses to evangelize and worship peacefully, often helping those who had encounters with police.

“This was in fact my favorite form of service: defending our rights in court,” he said in an interview from his new home in Wiesbaden, a town west of Frankfurt.

Kandaurov said he was interrogated for several hours on multiple occasions.

“We couldn’t sleep: every knock at the door, every heavy footstep out in the hallway, it deprived us of our sleep, it was nerve-racking,” he said.

Last summer, he and his wife left Russia – driving through Moldova and Ukraine, then flying to Germany. Their modest belongings included their one surviving wedding photo.

He now spends much of his time writing to those left behind and worshiping on Zoom with his new friends, thankful to be practicing his faith freely.

Associated Press religion coverage receives support through the AP’s collaboration with The Conversation US, with funding from Lilly Endowment Inc. The AP is solely responsible for this content.