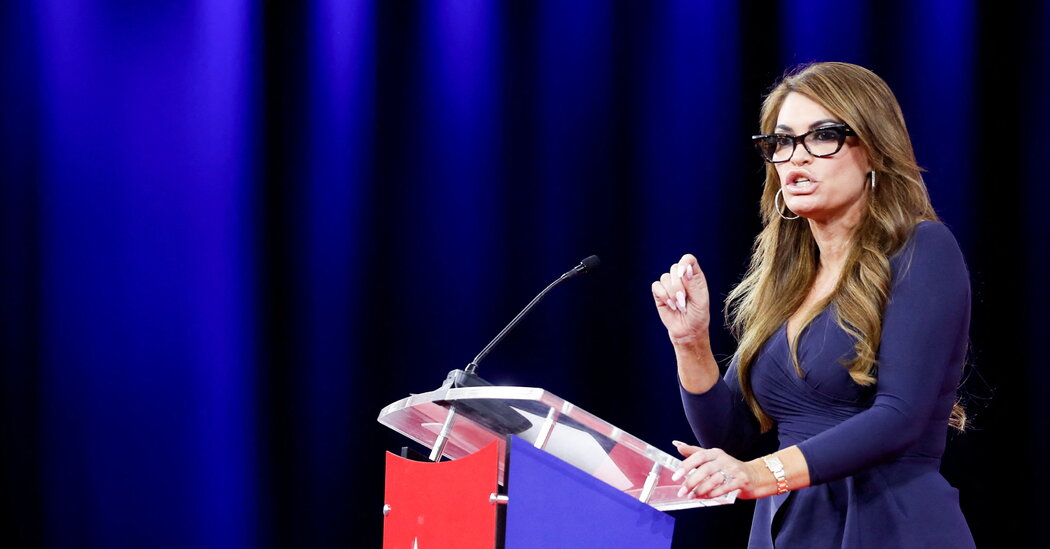 WASHINGTON — The House committee investigating the Jan. 6 attack on the Capitol said on Friday that it would compel Kimberly Guilfoyle, the fiancée of former President Donald J. Trump’s eldest son, to testify after she abruptly ended a voluntary interview with the panel.

Ms. Guilfoyle, a television personality who is engaged to Donald Trump Jr., met virtually with the committee’s staff investigators on Friday after she provided documents the committee described as “germane” to its inquiry. But she became agitated and cut off the questioning upon learning that members of the committee — including Representatives Adam B. Schiff of California and Jamie Raskin of Maryland, both Democrats, and Liz Cheney of Wyoming, the panel’s top Republican — were participating in the session, according to people familiar with the situation who spoke about the confidential interview on the condition of anonymity.

Members of the committee routinely take part in the panel’s interviews of high-profile witnesses.

When news of the interview leaked to news media outlets, Ms. Guilfoyle refused to continue, and her lawyer accused the panel of attempting to “sandbag” her and using her participation in the inquiry as a “political weapon” against the former president.

“Ms. Guilfoyle, under threat of subpoena, agreed to meet exclusively with counsel for the select committee in a good-faith effort to provide true and relevant evidence,” Ms. Guilfoyle’s lawyer, Joseph Tacopina, said in a statement after the interview fell apart. “However, upon Ms. Guilfoyle’s attendance, the committee revealed its untrustworthiness, as members notorious for leaking information appeared.”

When he asked for a break to address the issue, Mr. Tacopina said, the panel leaked the incident to reporters.

A spokesman for the committee denied having done so, and said Ms. Guilfoyle’s refusal to cooperate had left the panel with no choice but to use its subpoena power to force her to testify.

“The select committee had hoped she would do as dozens of other witnesses have done: participate in a voluntary transcribed interview with staff and committee members,” said Tim Mulvey, the spokesman. “Ms. Guilfoyle has now declined to do so, forcing the select committee to compel her testimony at an upcoming deposition.”

Ms. Guilfoyle has said she raised millions of dollars to help fund the rally that preceded the Jan. 6 attack on the Capitol. She was seen dancing in a backstage area to the Laura Branigan song “Gloria” before the mob assault. Her lawyer denied she had anything to do with the violence that broke out.

“They can do what they’re going to do,” Mr. Tacopina said of the committee’s threat of a subpoena. “Obviously, trust has gone out the window. At the end of day, Kimberly has done nothing wrong.”

The committee has interviewed more than 550 witnesses, but has debated internally how aggressive to be in pursuing members of the former president’s family.

A spokeswoman for Ms. Trump said this week she was “in discussions with the committee to voluntarily appear for an interview.”