Jacob Blake: Mayor says ‘violence in the community is not acceptable’ 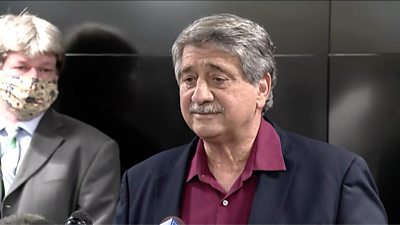 Kenosha Mayor John Antaramian condemned the violence that was sparked by the shooting of Jacob Blake by police on Sunday.

Mr Blake, 29, was shot and injured as he leaned into his car, as his children watched.

Since then, the protests have turned more violent, with two people killed and one wounded on Tuesday night. A 17-year-old has been arrested.

The mayor thanked Mr Blake’s mother for speaking out about the violence, saying it wasn’t what he would have wanted.