Jackson Confirmation Aside, G.O.P. Sees an Opening With Black Voters 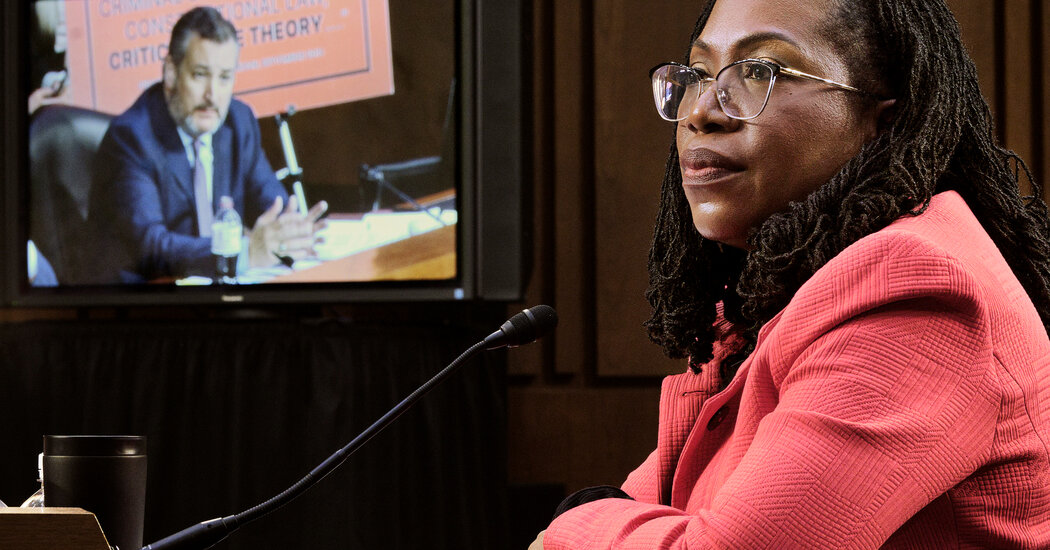 The spectacle created by Republican senators with presidential ambitions as they browbeat the first Black woman nominated to the Supreme Court — after which 47 Republicans voted against her on Thursday — might have seemed like glaring evidence that the G.O.P. had written off the Black vote this November.

Far from it. In rising inflation, stratospheric gas prices, lingering frustrations over Covid and new anxieties over the war in Ukraine, Republicans see a fresh opening, after the Obama and Trump eras, to peel away some Black voters who polls show are increasingly disenchanted with the Biden administration.

Thanks to gerrymandering, Republicans need not win over too many Black voters to affect a handful of races, and dozens of Black Republican House candidates — a record number of them — are reshaping the party’s pitch.

If anything, the G.O.P.’s treatment of the Supreme Court nominee, Judge Ketanji Brown Jackson, was a testimony to the party’s confidence that amid so many more powerful political forces and more consuming objects of public attention, their handling of her confirmation simply didn’t matter much.

“I think the Black people that this would turn off weren’t voting for Republicans anyway, no matter what,” said Wesley Hunt, a Black Army veteran and a Republican newcomer to politics who is running for a deep-red Texas House seat.

Senate Republican leaders had warned colleagues before the confirmation fight to keep the proceedings civil and cordial, clearly worried that the sight of a phalanx of white Republican inquisitors would turn voters off in an election year. But if Democrats still believe that Judge Jackson’s rough treatment will energize Black voters to come out this November and vote Democratic in big numbers, it appears likely that they will be disappointed.

For frustrated voters of all colors who are struggling to pay their bills and fill their tanks, November’s vote may simply be a chance to vote against the party in power.

“We are not a monolith,” said Jennifer-Ruth Green, a Black Air Force veteran who is running for Congress in Northwestern Indiana as a Republican. “We see inflation and gas prices. Voters are not stupid.”

In Gary, Ind., Roshaun Knowles, 42, a cosmetologist taking a break at the Billco Barber Shop, summed up how the confirmation hearings would play as she considered her vote this fall. She said she had felt despair as an accomplished Black woman was interrogated by white senators who, she believed, lacked Judge Jackson’s intellect and poise.

But, she said, vaccine mandates cost her a job as a property manager for a housing authority after she refused to get the shot. Stimulus checks kept too many people out of the work force. And President Biden? “He hasn’t been doing anything,” she said. “What has he done?”

Ms. Knowles said she was leaning toward voting Republican this fall, as she did in 2020, when she voted for Donald J. Trump, after voting for Hillary Clinton four years before and for Barack Obama twice.

Republicans on the campaign trail and over the airwaves are pressing the image of a faltering Democratic leadership that has no clue how to handle economic uncertainty, the persistent pandemic and rising crime. When Republican officials are asked about the party’s strategy toward Black voters, they invariably call on the few Black Republican elected officials and candidates to make the pitch.

But tellingly, Black Republican candidates such as Ms. Green and John James, who is running for a Michigan House seat, are not advertising their party affiliations, just their biographies — a sign that the G.O.P. brand remains toxic in some corners.

And Republican outreach efforts amount to little more than seizing on Black disaffection with Democrats.

Paris Dennard, director of Black media affairs for the Republican National Committee, said the party had opened eight community centers nationwide to engage Black voters. Candidates like Mr. Hunt are proof that the party’s message is inspiring Black Republicans to run, he said.

But a message focused on Democrats’ shortcomings deprives Black voters of hearing about policies they actually want, said Leah Wright Rigueur, author of “The Loneliness of the Black Republican: Pragmatic Politics and the Pursuit of Power.”

“It’s an incredibly effective strategy, but it’s also insidious,” said Dr. Rigueur, an associate professor of history at Johns Hopkins University. “It only works when there’s that dissatisfaction with the Democratic Party.”

It does work, however, even with Black voters who during the Obama and Trump years were remarkably united behind the Democratic Party.

“I don’t think Biden’s really even in office,” Robert Sanders scoffed as he cut hair in Gary, echoing criticism from the political right about the 79-year-old president. “I think he’s being escorted through office.”

The softening of Mr. Biden’s approval among Black voters is a clear warning to Democrats. Approval of the president among Black registered voters slid to 62 percent in March from 83 percent last summer in an NBC News poll and was not affected by the Supreme Court fight, said Bill McInturff of Public Opinion Strategies, a Republican polling firm that conducted the survey with the Democratic firm Hart Research.

The percentage of Black voters in the poll who said they strongly approved of the president’s performance fell to 28 percent last month, from 46 percent between April and August of last year. And intensity of support predicts turnout in elections.

Cornell Belcher, a Democratic pollster who is Black, said polls were picking up a reversion to the days before Mr. Obama energized Black voters positively and Mr. Trump then energized them negatively. Before 2008, he noted, it was normal for 12 percent to 14 percent of the Black electorate to vote Republican.

“What is more problematic is the lack of energy levels among younger voters, particularly younger African Americans,” Mr. Belcher said, noting that young voters of color in 2018 had delivered Democrats the House. “It’s a not-excited, disenchanted, frustrated, younger electorate right now, more like the electorate of 2014 and 2010 than 2018 — and that’s disastrous.”

Democratic officials say they are responding with Black voter mobilization projects that have started earlier than in previous midterm cycles. Last spring, the Democratic Congressional Campaign Committee hired organizers in five battleground states to focus on key Democratic constituencies. On Thursday, the committee announced a new round of ad purchases with Black news outlets.

Chris Taylor, a committee spokesman, said efforts by Republicans to court Black voters were disingenuous given the voting records among those in the party on pandemic relief, criminal justice reform and clean air and water legislation.

“Nearly every Republican in Congress opposed our priorities,” said Mr. Taylor, who is Black.

Because of gerrymandered district lines, most Republican candidates for the House do not need many — if any — Black voters. But in districts like Indiana’s First, with its narrow Democratic lean and a Republican target on its back, a Republican challenger will need to make inroads with Black voters, or at least hope for soft turnout for Democrats.

Judge Jackson’s rough reception does not appear to be a threat to that hope. Even Black voters who watched the hearings attentively were surprisingly forgiving of her Republican inquisitors.

“I don’t think she was treated fairly,” said Greg Fleming, 72, a financial adviser in Gary. “But that’s the way things are in this country. In today’s climate, unfortunately, it’s to be expected.”

Like Indiana’s First, Georgia’s Second District still leans Democratic, but if a candidate can chip into its rural Black vote, he has a strong chance. For Jeremy Hunt, an Army veteran and Black candidate running in the Republican primary to challenge Representative Sanford Bishop, a long-serving Democrat who is also Black, the Supreme Court is not part of his calculus.

“We can talk about Republicans versus Democrats, but ultimately, that’s not what voters want to hear from us as leaders,” Mr. Hunt said. “There is a huge temptation to get into national-level stuff and make it about what’s going on, you know, on different levels, but a big part of our campaign is keeping it local.”

Still, when he talks about what is afflicting local farmers and truckers, Mr. Hunt said, he invariably comes back around to the economy, gas prices and inflation.

Black voters were the most likely to say they were personally falling behind because of inflation, according to the NBC News poll. And that is producing anxieties that Republicans are eager to exploit.

Mr. Donalds said he had watched most of Judge Jackson’s hearings and had seen nothing that Republicans needed to apologize for.

With Democrats disappointing and Republicans offering a weak alternative, some Black voters said they didn’t know where to turn politically.

In Gary, Mr. Fleming said he worried about the rising power of the Democratic left wing. But until more Republicans drop their “conspiracy theories” and extreme comments, he said, they weren’t much of an option.

“I mean, they thought everything that happened on Jan. 6 was AOK? That’s crazy,” Mr. Fleming said. “If a Mitt Romney-type Republican ran, I could go for that. But Republicans, they’re on another planet right now. I can’t even call them far right. They’re defying gravity.”