It Helped Catch Serial Killers. Can It Stop Elephant Poachers, Too? 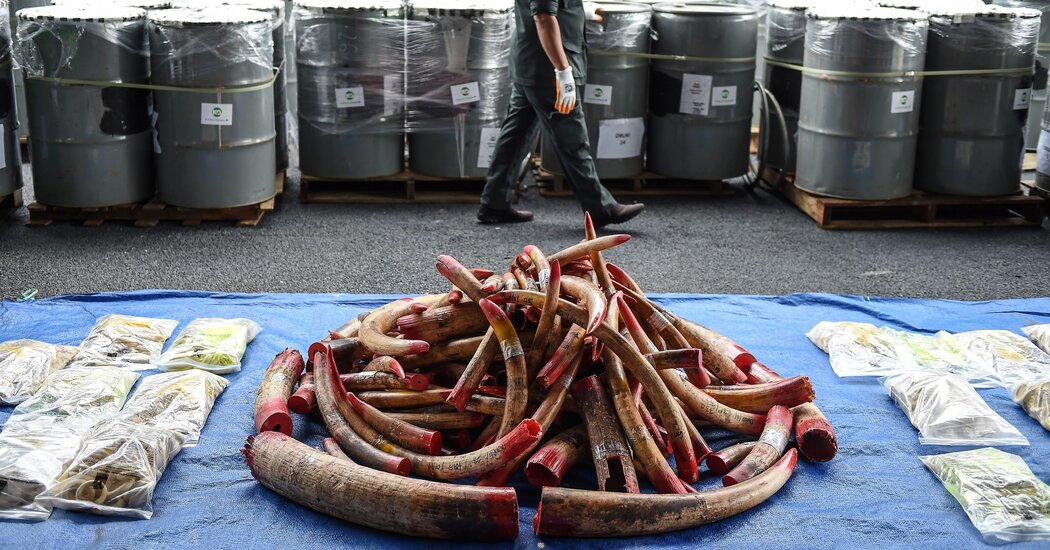 Cambodian law enforcement officials received a tip from investigators in the U.S. Department of Homeland Security. At the freight terminal in Phnom Penh, a cargo container — supposedly carrying legally harvested wood from an African country — was unloaded for inspection. The officials pried open large logs and discovered more than a ton of illegal elephant ivory and other animal parts, hidden in paraffin in the hollowed-out wood.

This haul, recovered about five years ago, was just a small fraction of the 500 tons of raw ivory shipped out of Africa each year, destined for illegal markets in China and Southeast Asia.

Nothing can bring back the elephants that were killed for their tusks. But a genetic investigation technique, familial searching, could help turn the tide against illicit hauls of elephant parts and other wildlife like the batch in Phnom Penh. Researchers detailed in the journal Nature Human Behaviour on Monday how they used the tool to link hundreds of individual tusks recovered from dozens of large shipments of illegal ivory, providing detailed information about how and where global crime networks operate.

While the technique has been used in many recent human criminal cases, Sam Wasser, a conservation biologist at the University of Washington and an author of the paper, said this was the first time it had been applied to animals and to global environmental crime.

John Brown III, a special agent with Homeland Security Investigations and also an author of the paper, said Dr. Wasser’s team’s approach had helped wildlife-trafficking investigators around the world “see the connections and identify the bigger network.”

Analyzing a pattern over time, he added, is far more valuable than investigating a single crime on its own. “It’s a huge challenge to connect the dots when investigated as a one-off,” Mr. Brown said. Plus, linking one smuggler to multiple ivory hauls can help prosecutors build stronger cases and lead to stiffer penalties.

Each year about 50,000 African elephants are killed, threatening the future of the continent’s elephant populations. Poachers in African countries typically sell ivory to middlemen who in turn sell it to large export groups, the experts in moving illegal goods.

These groups rely on oceangoing container ships to move their smuggled cargo. Given the huge volume of maritime trade — some 11 billion tons a year — inspecting contents is difficult and expensive.

Dr. Wasser’s team set out to address this problem by adapting tools that are used in human forensics. Investigators sometimes use familial searching to find a perpetrator by identifying likely relatives in a DNA database. One of the most famous cases that used this method led to the conviction of Joseph James DeAngelo, known as the Golden State Killer.

In the study, researchers sampled 4,320 tusks from savannah and forest elephants from 49 large shipments of illegal ivory, seized by the authorities between 2002 and 2019.

Dr. Wasser’s lab at the University of Washington had previously developed methods for linking ivory to the genetic signatures of specific animals by modifying a tool used to extract DNA from human teeth. Once researchers access a load of confiscated ivory, they must be strategic about which tusks to sample.

The team considers several factors to ensure a geographically representative sample and to choose unique tusks. Then the scientists cut a small square from the base of each tusk — about two inches long and half an inch thick — targeting a layer rich in DNA to be analyzed in Dr. Wasser’s Seattle lab.

In the current study, the team found nearly 600 genetically matched tusks, most from close elephant relatives (parent, offspring, or full- or half-siblings) across the seized loads. These genetic matches allow law enforcement officials to link physical evidence from separate investigations — like cellphone records and bills of lading from originating ports — in order to pinpoint criminals.

“We are able to understand far more about how connected transnational criminal organizations are, how they work, and how they have evolved over time,” Dr. Wasser said.

The paper shows a repeating pattern over the 17 years of tusks from the same elephant families moving through common African ports in separate containers. Combining the genetic and physical evidence, the team mapped the pattern of the ports used in trafficking, the countries where elephants were poached and the connections between the consignments. The results suggest that the same large trafficking cartels have operated for decades and are still getting ivory from the same places.

But the study also found that the cartels have moved their export operations to less conspicuous countries to try to avoid capture. Over the 17-year period, trafficking activity moved from the poaching hot spot of Tanzania to nearby Kenya, then to Uganda, a landlocked country where ivory is packed in containers and taken by road or rail to the port in Mombasa, Kenya.

After 2015, export activity picked up in the Democratic Republic of Congo and Angola. “We saw that the D.R.C. was the next upcoming export hot spot,” Dr. Wasser said.

This research helped lead to the arrest in November in Edmonds, Wash., of two Congolese wildlife smugglers. They are facing more than 20 years in prison.

“We have the opportunity to take out the big guys once and for all,” Dr. Wasser said, adding that stopping ivory from getting into transit “is the single biggest impact you can have to dismantle and disrupt the trade.”

Dr. Wasser is building a large DNA database of seized ivory. And it’s growing. Ivory confiscated in the future will be analyzed and added so that connections to earlier illicit activity can be made.

“What we’ve learned from elephants has pioneered a whole new field of investigation,” he said. This approach is now being applied to trade in illegal timber as well as pangolins, the most poached mammal in the world.

Leaders of the crime groups who deal in ivory and pangolins are believed to also smuggle drugs, weapons and people. In the future, the investigators using this evidence hope other animals may be saved — and organized crime may be reduced — as a result of the genetic legacy of poached African elephants.