Islamic State claims Hadera attack; minister: the 2 the terrorists were linked to IS – The Times of Israel

The terrorists who carried out a deadly attack in the city of Hadera on Sunday night that left two Israelis dead and several others injured were affiliated with the Islamic State, Internal Security Minister Omer Barlev said.

“It’s a very serious attack. We are talking about terrorists belonging to the Islamic State,” Barlev said speaking to Army Radio after midnight Sunday.

“We are witnessing an alarming awakening, that could happen in any country. Police will deploy in all areas,” he said.

Barlev did not detail the two shooters’ affiliation to ISIS nor identify them by name.

The Islamic State later claimed responsibility in a statement released by the Amaq propaganda site.

“Two members of the Jewish (state’s) police force were killed and others were injured in an immersive commando attack,” IS said in a rare claim for an attack inside Israel.

According to the SITE intelligence group, this is the first time since 2017 that IS has officially claimed an attack in Israel.

Hebrew media widely identified the two terrorists as Ayman and Ibrahim Ighbariah, cousins whom police said were residents of the central Arab city of Umm al-Fahm. Israel Police said the two arrived at the scene with 1,100 bullets, as well as at least three handguns and six knives.

The two terrorists opened fire at police along Samuel Herbert road in Hadera on Sunday night, Israel Police said. Two people were killed and several others were wounded before officers gunned down both Ighbariahs, according to police and medics.

Ibrahim, 31, was arrested in 2016 by Turkish police after trying to join the Islamic State jihadist group in Syria. He was later apprehended by Israeli security forces and served a year and a half in prison for membership in a terror group. 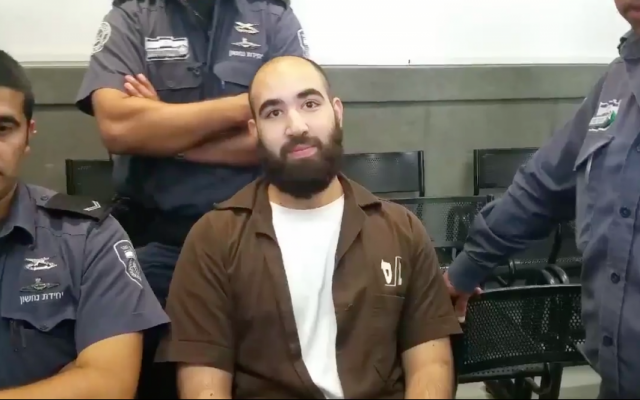 Ibrahim Hassan Yussef Ighbariah pictured in a Haifa District Court on June 29, 2016, wheh he was on trial for trying to join the Islamic State in Syria. (Screen capture: Twitter)

Ayman Ighbariah, the second Hadera shooter, was arrested by the Shin Bet in 2017 for illegal arms possession, according to the Haaretz daily.

A video circulating on social media alleged to show the two Ighbariahs embracing in front of an Islamic State flag before the Sunday attack. The identity of the people in the video could not be independently verified.

Police officers entered the city of Umm al-Fahm shortly after the shooting to search for suspects.

Reached for further details, Umm al-Fahm mayor Samir Mahameed told The Times of Israel that precise information about the identity and background of the suspects was still unavailable. The Umm al-Fahm municipality condemned their actions.

The attack took place during a historic gathering of the foreign ministers of the UAE, Bahrain, Morocco and Egypt, together with the US secretary of state and Israel’s foreign minister — at the Negev Summit in Sde Boker. All the summit participants condemned the attack.

The IS proto-state — which once administered millions of people across swathes of Syria and Iraq — was declared defeated on March 23, 2019.

But IS operatives continue to conduct attacks across the globe.

Earlier this month, the IS group confirmed the death of its leader Abu Ibrahim al-Qurashi and named Abu Hasan al-Hashemi al-Qurashi as his replacement.

The announcement came more than a month after the IS chief died during a US raid that saw commandos swoop in by helicopter to an area in northwest Syria controlled by rival jihadists.

The Hamas and Palestinian Islamic Jihad terror groups celebrated the shootings as a “natural response” to the “summit of humiliation.”

Last weekend, two officers were hurt in a suspected stabbing attack in East Jerusalem’s Ras al-Amud neighborhood, and an Israeli man was stabbed and lightly hurt when he was out jogging on Jerusalem’s Hebron Road.

Earlier this month, there were several attacks in Jerusalem’s Old City, and in a nearby West Bank town.

AFP contributed to this report