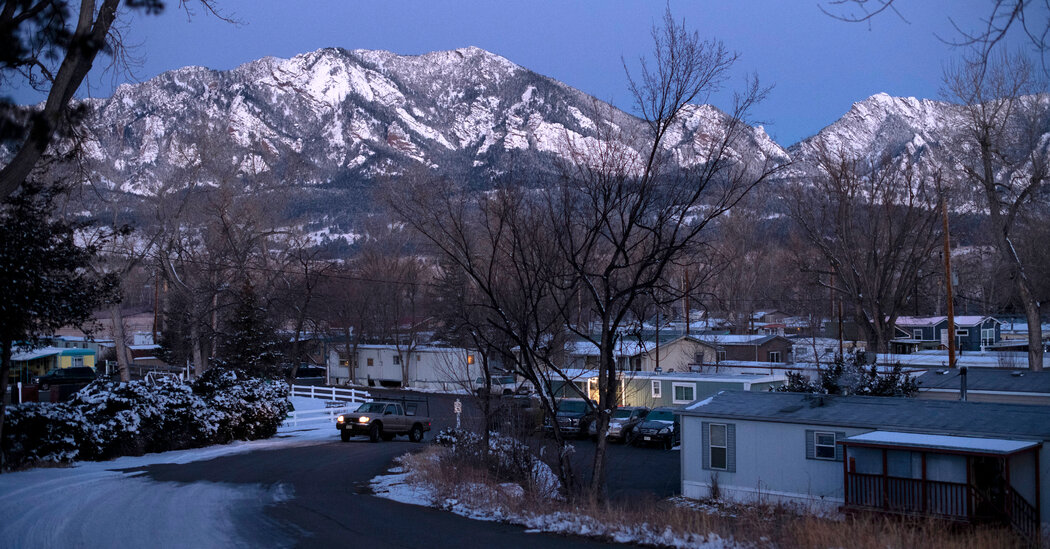 GOLDEN, Colo. — When Sarah Clement moved to the Golden Hills mobile home park two years ago, she felt like she had won the lottery. After years of squeezing into one-bedroom apartments with her, her 7-year-old son finally settled into his own bedroom, his toys splayed out in the yard and his school just at the edge of the park.

Ms. Clement loved the friendliness of her neighbors and getting to watch the sun rise over the scrubby mesa to her east and set behind the foothills of the Rocky Mountains to the west. And living there was affordable on her salary as an athletic trainer: After purchasing the manufactured home, the rent for the plot it sits on was just $625 a month.

But just six months after she moved in, the plot of land and all of the stability and comfort that came with it seemed suddenly ripped out from under her.

The Colorado couple that owned the park for years had put it up for sale. Ms. Clement and her neighbors knew that if the park was taken over by one of the big manufactured-housing operators who were buying up parks all over the state, the rents would dramatically increase.

“It was like this deflated feeling of, oh my god, I thought we had it — I thought this was where our roots were going to be,” Ms. Clement said.

Across the country, manufactured-housing park residents like Ms. Clement are finding their homes at the center of a bull’s-eye, as a deluge of investment companies expand their mobile-home park portfolios at a breakneck pace, threatening the stability of one of the nation’s few remaining sources of affordable housing.

Residents of Golden Hills quickly got organized. They formed a cooperative to offer to buy the park themselves and were on track to obtain financing from ROC USA Capital, which supports resident-owned communities across the country.

For months, they were full of hope. The three-block stretch of beige single- and double-wide homes bustled with community meetings; residents distributed fliers and newsletters. Local politicians rallied around them, and the city voted to zone the park for manufactured-home use only.

But to no avail: In July, the owners rejected their initial offer and a higher one a few months later, and sold the park instead to Harmony Communities, a manufactured-home operator with 5,000 residents in 33 parks across the western United States. The company quickly proved the Golden Hills residents’ fears correct, applying 50-percent rent increases and issuing a 12-page single-spaced list of new park rules.

A spokesman for Harmony Communities, George Antypas, defended the rent increase, noting that the new rents were still below those at similar parks nearby. “We believe in charging a fair market rent,” Mr. Antypas said, adding that the additional revenue would go toward repair costs and that there were need-based subsidies available from the city.

Then, just a month after purchasing the park, the company offered to sell it to the residents — at a far higher price than the company had just paid for it. Once again, though, the deal fell through, when the company declined the residents’ offer in January.

Facing both the rent increases and the cost of altering their homes to comply with the park’s new rules, residents are rushing to search for other housing but finding few if any options in Golden, a booming town just west of Denver. At an apartment complex up the road, one-bedroom units start at $2,400 a month, almost $1,000 more than Ms. Clement said she paid for the same size apartment there in 2018.

Industry leaders are blunt about the business model: According to materials for a “boot camp” for aspiring mobile-home park investors prepared by Mobile Home University, which is run by two of the largest mobile-home park owners in the country, “the fact that tenants can’t afford the $5,000 it costs to move a mobile home keeps revenues stable and makes it easy to raise rents without losing any occupancy.”

Real Capital Analytics, a market research firm, said in a June 2021 report that institutional investors had accounted for 23 percent of manufactured housing park purchases over the previous two years, up from 13 percent in the two years before that. That has made the investors among the country’s largest landlords. Some 22 million people live in manufactured homes in the United States, according to the Manufactured Housing Institute, a national trade organization. And Fannie Mae said that manufactured housing represents more than 6 percent of the nation’s housing units.

If residents of mobile-home parks can’t keep up with rising rents, or can’t afford to make the often extensive alterations to porches, gardens and awnings that are required under the new management’s rules, they are swiftly replaced. With prices and rents for all kinds of housing soaring in many parts of the country, demand for manufactured housing is climbing. Many young professional families and college students turn to mobile home parks as a final vestige of relatively affordable housing.

“It is, and has been historically, an affordable home that people can own — at least, halfway own — and generate some wealth, some equity,” said Paul Bradley, president of ROC USA.

As park after park has come under corporate ownership, momentum has built in mobile home parks across the country and in state legislatures to protect the affordability of the parks by putting them into the residents’ hands.

When the Sans Souci mobile home park near Boulder’s scenic Flatirons was purchased by a corporate landlord in 2018, residents weren’t given a chance to make an offer. It wasn’t until residents received a notification of new rules attached to their door that residents learned the park had even been put up for sale, according to a resident. A few weeks later, maintenance crews showed up and began mowing down bushes, trees and flowers.

Under the ownership of the company, Strive Communities, the park raised rents by 12 percent and issued extensive new rules for park maintenance instructing residents — many of them aging artists and self-described hippies — to remove years of collected art and decorations from their yards.

“They wanted a uniform-looking, appearing, park,” said Cynthia Ceelen a 23-year resident. “That was their end goal, so that in three to five years they could resell.”

According to Strive Communities, the rent increases were intended to bring rates closer to market rate, and the company invested nearly $1 million in park improvements.

The residents went to their elected representatives, calling for legislation that would require park owners to give residents notice when they intended to sell, a provision called an “opportunity to purchase” requirement. Gov. Jared Polis signed the requirement into Colorado law in 2020, and similar laws are on the books in a number of other states.

The Sans Souci residents’ work soon paid off. That same year, Strive Communities notified the residents that the park was up for sale.

Some of the residents objected to making a purchase offer, resisting the $150-a-month rent increase that would be needed to finance the purchase.

But the majority felt it was worth it.

“It was irrelevant whether we were buying it for too much money or not,” Ms. Ceelen said. “Pure and simple, if we don’t buy it, it’s going to be bought out by another corporation.”

They made an offer, and in 2021 became the owners of their park.

“People are taking pride now,” said Peggy Kuhn, a resident of the park, who said her neighbors had done a better job of keeping up the park since they gained ownership. There’s been talk of starting a community garden or creating a solar grid for the park. “It’s an optimism in the air — ‘oh, what else can we do?’” Ms. Kuhn said.

But in the two years since Colorado’s opportunity-to-purchase law went into effect, only Sans Souci and two other parks have been sold to residents. In 20 cases, park owners failed to notify residents in compliance with the law before selling, according to data from the state Department of Local Affairs. In others, residents were notified but struggled to coalesce quickly enough to make a purchase offer.

In legislation introduced this month, Mr. Boesenecker proposes requiring park owners to allow residents or a local government to make the first offer. The bill would also limit rent increases to 3 percent a year. Another bill is being drafted that would give residents access to a loan fund that would help them compete with private equity firms, many of which receive government-sponsored financing to purchase parks.

In Golden Hills, residents feel that the legislation is coming too late.

Patricia George has lived in the park for 12 years. But with her new rent of nearly $800 a month eating up most of her disability benefits, leaving her with just $250 left over each month, she can’t afford to stay.

She has been going through her belongings and selling what she can to make up the difference: her TV, her mother’s antique dishes, her grandmother’s jewelry. She has applied for senior housing, but the waiting lists are long.

“It’s almost inhumane, what they’re doing” Ms. George said. “We’re just left to pick up the pieces, whatever they may be, and maybe make it through. Or a lot of us might end up on the streets, in homeless shelters, if there’s an open bed for us. It’s hard. It’s really hard.”