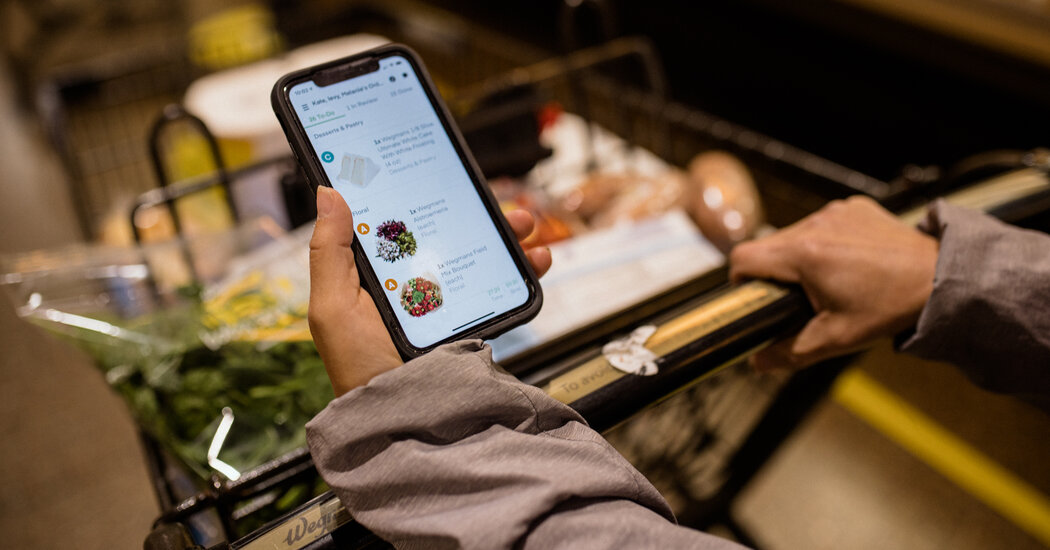 Instacart, the grocery delivery start-up, said on Thursday that it was slashing its valuation to about $24 billion from $39 billion, in a reflection of the poor market conditions for technology stocks.

“We are confident in the strength of our business, but we are not immune to the market turbulence that has impacted leading technology companies both public and private,” the company said in a statement.

News of the adjusted valuation, a rare action by a private company that occurs when an independent valuation evaluator reconsiders the worth of a company’s stock, was reported earlier by Bloomberg. Instacart told employees about the lowered valuation earlier on Thursday, the company said.

The valuation change does present a potential benefit: Employees could be offered stock-based compensation that may have more upside over the long run, assuming market interest in Instacart rebounds.

The company pairs people at home ordering groceries on its app with shoppers who work as independent contractors for the company. The contractors pick someone’s groceries and then deliver them. During the pandemic, with people stuck at home, the company’s growth skyrocketed, and it raised $265 million last year, more than doubling its valuation.

But grocery stores have complained that Instacart’s fees make it hard for them to turn a profit, and the company has faced questions, along with other pandemic successes like Zoom, Peloton and DoorDash, about whether its business is sustainable when the world returns to a version of normal.

Instacart has also worked to broaden its offerings. On Wednesday, it announced several new products, including expanded advertising offerings and software analytics for grocery stores, along with a pilot program that would allow groceries to be delivered within 15 minutes by using miniature fulfillment centers.

Fidji Simo, a former Facebook executive who became Instacart’s chief executive last year, said in an interview this week that she believed she was overseeing “the third act of the company.”

But she will still have to contend with market realities. The company framed its lower valuation as a way to boost the value of equity awards for new and current employees, and said it had plenty of cash in the bank — more than $1 billion — and did not have to raise more anytime soon.

Instacart also argued that its flagging stock fortunes were part of a larger tech trend rather than an anomaly. Other companies in the advertising and delivery businesses, like Shopify, DoorDash and Meta, the parent company of Facebook, have also seen the value of their stock decline recently.