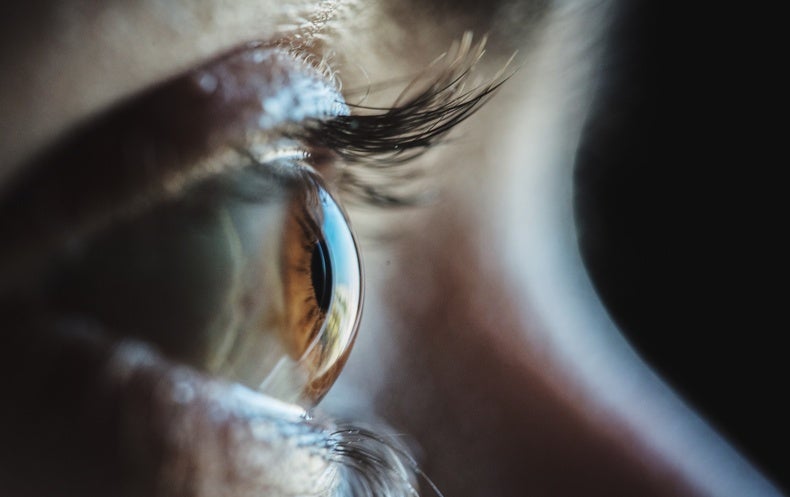 After 40 years of blindness, a 58-year-old man can once again see images and moving objects, thanks to an injection of light-sensitive proteins into his retina.

The study, published on 24 May in Nature Medicine, is the first successful clinical application of a technique called optogenetics, which uses flashes of light to control gene expression and neuron firing. The technique is widely used in laboratories to probe neural circuitry and is being investigated as a potential treatment for pain, blindness and brain disorders.

The clinical trial, run by the company GenSight Biologics, headquartered in Paris, enrolls people with retinitis pigmentosa (RP): a degenerative disease that kills off the eye’s photoreceptor cells, which are the first step in the visual pathway. In a healthy retina, photoreceptors detect light and send electrical signals to retinal ganglion cells (RGCs), which then transmit the signal to the brain. GenSight’s optogenetic therapy skips the damaged photoreceptor cells entirely by using a virus to deliver light-sensitive bacterial proteins into the RGCs, allowing them to detect images directly.

The researchers injected the virus into the eye of a man with RP, then waited four months for the RGCs to begin producing the proteins before testing his vision. Ophthalmologist José-Alain Sahel of the University of Pittsburgh Medical Center in Pennsylvania, who led the study, says that one of the challenges was regulating the amount and type of light entering the eye, since a healthy retina uses a variety of cells and light-sensitive proteins to see a wide range of light. “No protein can replicate what the system can do,” he says. So the researchers engineered a set of goggles that capture the images around the man and optimise them for detection by the bacterial proteins.

Using a camera, the goggles analyse changes in contrast and brightness and convert them in real time into what Sahel describes as a ‘starry sky’ of amber-coloured dots. When the light from these dots enters a person’s eye, it activates the proteins and causes the RGCs to send a signal to the brain, which then resolves these patterns into an image.

The man taking part in the trial had to train with the goggles for several months before his brain adjusted to interpret the dots correctly. “He was like an experimentalist, a scientist trying to understand what he was seeing and make sense of it,” Sahel says. Eventually, he was able to make out high-contrast images, including objects on a table and the white stripes in a crosswalk. When the researchers recorded his brain activity, they found that his visual cortex reacted to the image in the same way as it would if he had normal sight.

The man still can’t see without the goggles, but Sahel says that he wears them for several hours per day and that his vision has continued to improve in the two years since his injection. Six other people were injected with the same light-sensitive proteins last year, but the COVID-19 epidemic delayed their training with the goggles. Sahel says he expects to have their results within about a year.

“It’s a big step for the field,” says John Flannery, a neurobiologist at the University of California, Berkeley. “The most important thing is that it seems to be safe and permanent, which is really encouraging.” Because the retina contains around 100 times more photoreceptors than RGCs, the resolution of images detected by RGCs will never be as good as natural vision. But Flannery says it is exciting that the brain can interpret images accurately.

Others say that more research is needed. “It’s interesting, but it’s an N of 1,” says Sheila Nirenberg, a neuroscientist at Weill Cornell Medical College in New York City. She adds that she looks forward to seeing whether the other people in the trial, including some who were injected with higher doses of the protein, have similar results.

GenSight is one of several companies developing optogenetics as a treatment for RP and other disorders of the retina. In March, Nirenberg’s company Bionic Sight announced that four of the five people with RP it treated with a similar optogenetic therapy and a VR headset had recovered some level of vision, although the full trial results have not yet been published. And Swiss pharma giant Novartis is developing a therapy based on a different protein that is so light sensitive that goggles may not be needed. That therapy has not yet entered clinical trials.

Neuroscientist Karl Deisseroth from Stanford University in California, who co-developed optogenetics as a laboratory technique, says the study is important because it is the first time that its effects have been shown in people. “It will be interesting to try this with more light-sensitive opsins” that might not require goggles, he says. But he expects optogenetics to be most useful as a research tool that leads to therapies rather than a therapy itself. “What we hope to see even more of is optogenetics-guided human and clinical studies,” he says.

This article is reproduced with permission and was first published on May 24 2021.