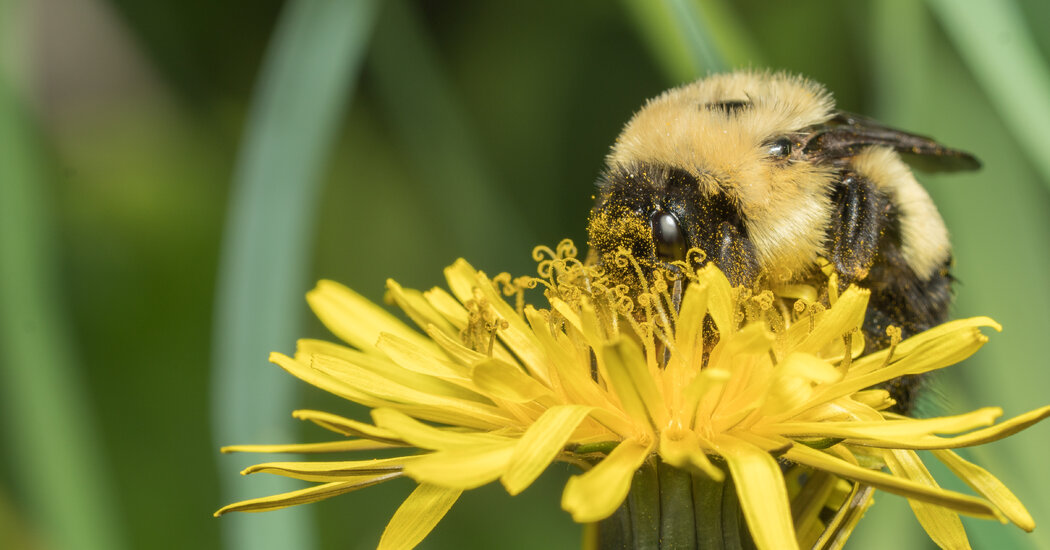 As I drove last May through Appleton, Wis., the small town offered up a series of idyllic scenes: children playing on tree-lined streets, couples walking their dogs, and all the while, the wind carrying the sweetness of spring.

But something was unusual here. The lawns of many of the homes were wild. Resembling miniature meadows, they sported long grass, bright yellow dandelions and carpets of purple creeping Charlie — a far cry from the traditional American lawn.

These homes were not abandoned or neglected, and no stacks of newspapers festooned their porches. Rather, the city had asked residents to put away their lawn mowers for the month of May. This allowed plants typically identified as weeds — including violets, white clover and dandelions — to flower.

Appleton’s No Mow May initiative had a clear purpose: to save the bees — and not just honeybees (which are European imports), but also native bees, such as bumble bees, mining bees and sweat bees.

Bees are facing catastrophic declines. In North America, nearly one in four native bee species is imperiled, according to the Center for Biological Diversity, partly because of habitat loss, pesticide use, climate change and urbanization.

Lawns typically provide poor habitat for bees. But if allowed to flower, lawn weeds — perhaps better characterized as plants other than grass — can provide rare spring food for bees emerging from hibernation.

Appleton, some 200 miles north of Chicago, is a small college town nestled on the shores of the meandering Fox River. Two assistant professors at a local liberal arts college, Dr. Israel Del Toro and Dr. Relena Ribbons of Lawrence University, knew that No Mow May was popular in Britain. They wondered if the initiative might take root here, too.

They began working with the Appleton Common Council, and, in 2020, Appleton became the first city in the United States to adopt No Mow May, with 435 homes registering to take part.

Dr. Del Toro and Dr. Ribbons studied the impacts of No Mow May on Appleton’s bees. They found that No Mow May lawns had five times the number of bees and three times the bee species than did mown parks. Armed with this information, they asked other communities to participate.

By 2021, a dozen communities across Wisconsin had adopted No Mow May. It also spread to communities in Iowa, Minnesota, Illinois and Montana.

I learned about No Mow May in the fall of 2020 when I was looking to make my own yard more friendly to bees. The following spring, I helped organize No Mow May in Shorewood Hills, Wis., where I live. When I realized how quickly the movement was spreading, I started photographing it across Wisconsin.

Mike Wiza, the mayor of Stevens Point, Wis., supported No Mow May last year. “It was successful — and I would say pretty widely successful,” he said. Stevens Point had around 230 people register for the event, which was double what they had anticipated.

I met Ana Merchak, a resident of Stevens Point, while taking photos in her neighborhood. Her two young children were picking dandelions in the front yard. “I go in my front yard and backyard and see bees every day,” she said. “It’s cool my kids can grow up being exposed to that.”

Ms. Merchak was also grateful for how the initiative had brought the local population together. “The community tie is awesome,” she said, “especially after this pandemic year where we couldn’t do things and celebrate our community in person with one another.”

Not everyone appreciated the unmown lawns. Allison Roberts, a resident of Prairie du Chien, Wis., participated in No Mow May even though her city hadn’t adopted it. After a few weeks, she awoke from a nap to find police officers pounding on her door.

“Apparently, they were here to ensure I was not dead,” she said.

Nor were her neighbors happy with her shaggy lawn. One of them, unable to stand the sight of it, eventually mowed it without her permission.

Travel Trends That Will Define 2022

Looking ahead. As governments across the world loosen coronavirus restrictions, the travel industry hopes this will be the year that travel comes roaring back. Here is what to expect:

Rental cars. Travelers can expect higher prices, and older cars with high mileage, since companies still haven’t been able to expand their fleets. Seeking an alternative? Car-sharing platforms might be a more affordable option.

Cruises. Despite a bumpy start to the year, thanks to Omicron’s surge, demand for cruises remains high. Luxury expedition voyages are particularly appealing right now, because they typically sail on smaller ships and steer away from crowded destinations.

Destinations. Cities are officially back: Travelers are eager to dive into the sights, bites and sounds of a metropolis like Parisor New York. For a more relaxing time, some resorts in the U.S. are pioneering an almost all-inclusive model that takes the guesswork out of planning a vacation.

Experiences. Travel options centered around sexual wellness (think couples retreats and beachfront sessions with intimacy coaches) are growing popular. Trips with an educational bent, meanwhile, are increasingly sought after by families with children.

Still, despite the unanticipated antagonism, Ms. Roberts plans to participate in No Mow May again next year. “I’m not doing it to make anyone mad,” she explained. “I’m doing it because I have the right to, and because it’s the right thing to do.”

Recently, the Appleton Common Council voted to make No Mow May permanent. Many other municipalities throughout Wisconsin have either already adopted it for 2022 or are considering it.

The efforts may be paying off. A rusty patched bumble bee, a federally endangered species whose range has shrunk precipitously since the 1990s, was spotted for the first time at a downtown Appleton home last year.

But experts caution that the initiative is only a starting point for bee conservation. “What you did for one month, that’s cool, that helps,” Dr. Del Toro said. “But what are you going to do the rest of the summer, or the rest of the year, to make sure that our pollinators are protected?”

The role of urban and suburban environments for bees is “absolutely huge,” explained Dr. Del Toro, who said he now receives emails from Appleton residents asking how to incorporate other bee-friendly practices, such as planting native flowers, creating bee nesting habitats and reducing herbicide and pesticide use.

“We have to start thinking about what our role is in this urban ecosystem,” he said, including how to strike a balance between development and biodiversity.

For many of us, that may mean sitting back and watching the grass grow.