In Thailand, a 21-Year-Old Student Dares To Tackle A Taboo Subject – NPR 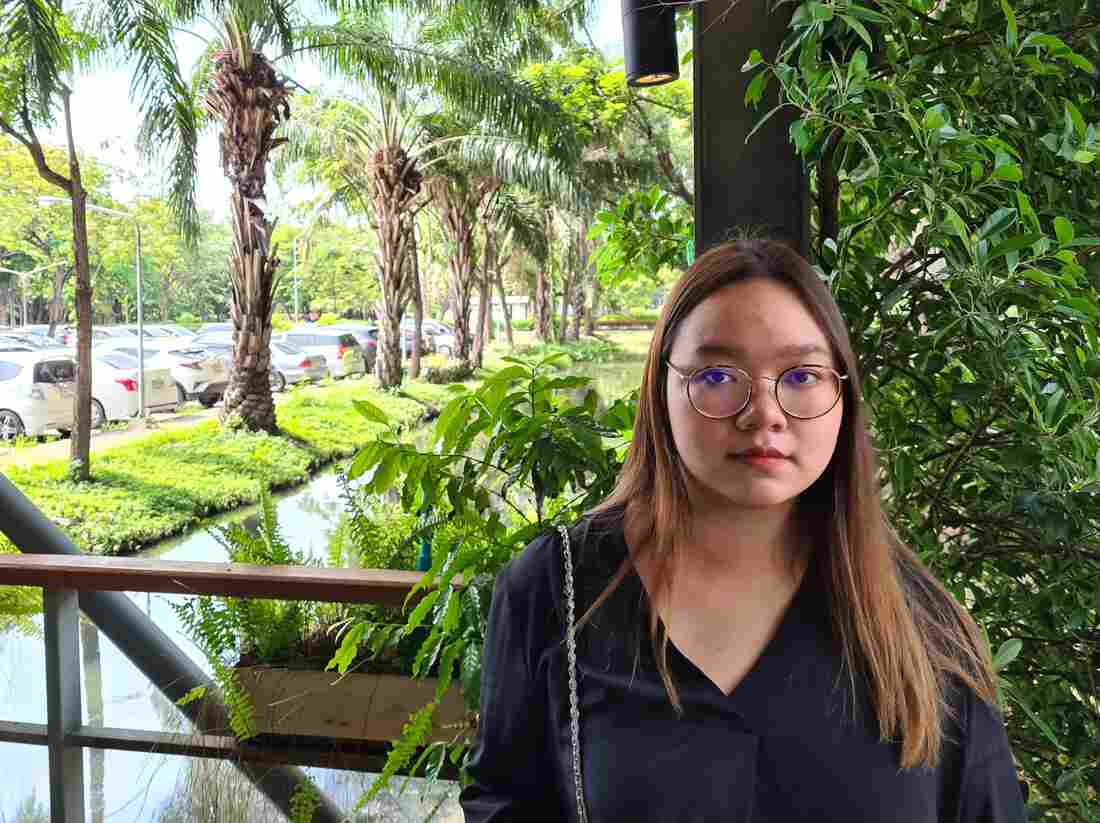 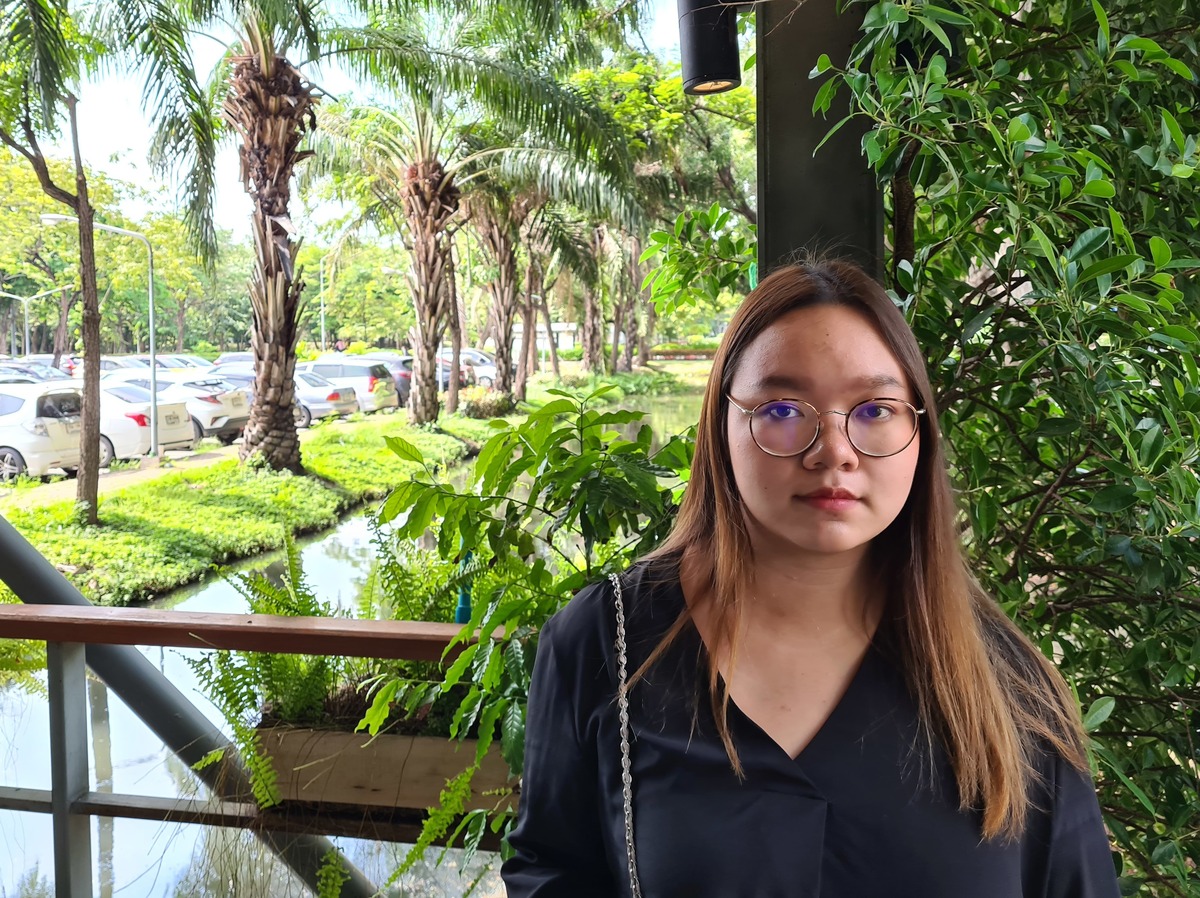 Panusaya Sithijirawattanakul, who read a politically charged manifesto at a rally last week, outside Thammasat University on Tuesday.

On August 10, 21-year-old student Panusaya Sithijirawattanakul’s life changed forever. That’s the night she took to the stage at a rally at Thammasat University outside Bangkok and read a ten-point manifesto aimed at reform of Thailand’s politically powerful monarchy — a taboo subject in the Kingdom where the royal family is protected by strict laws that can land critics in jail.

At an interview off campus, she said it was an assignment she always thought was hers. 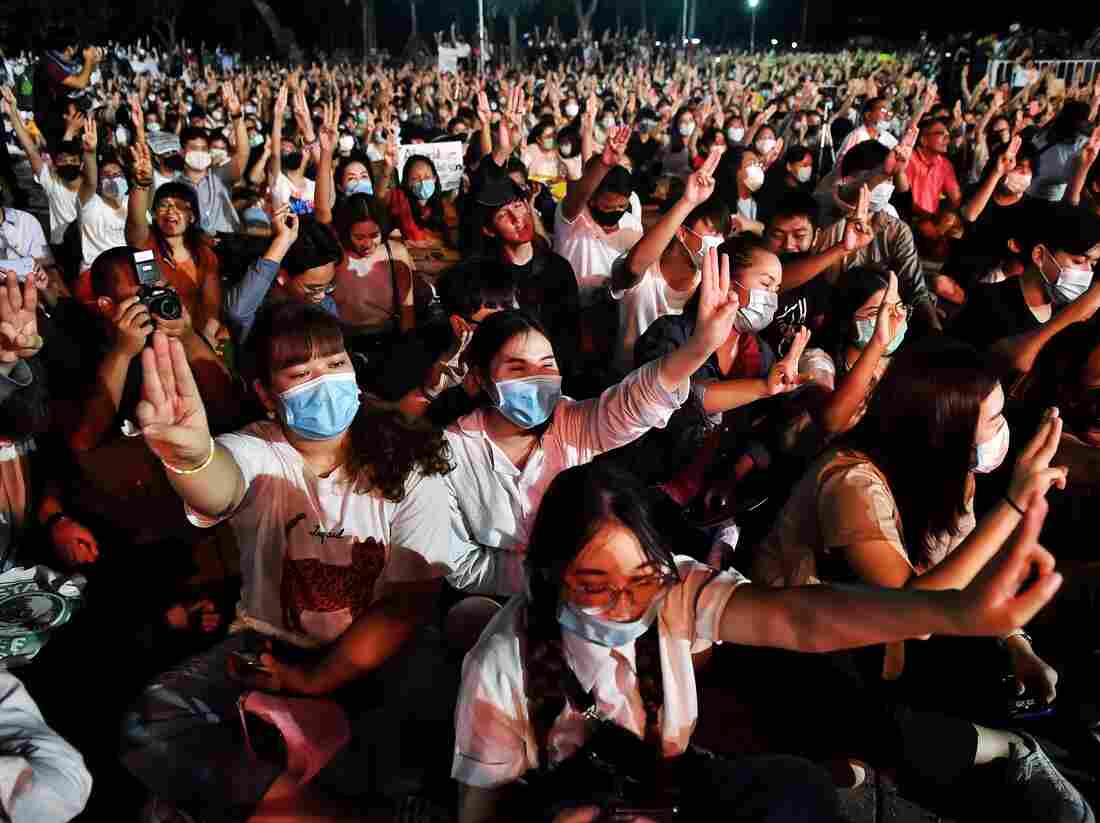 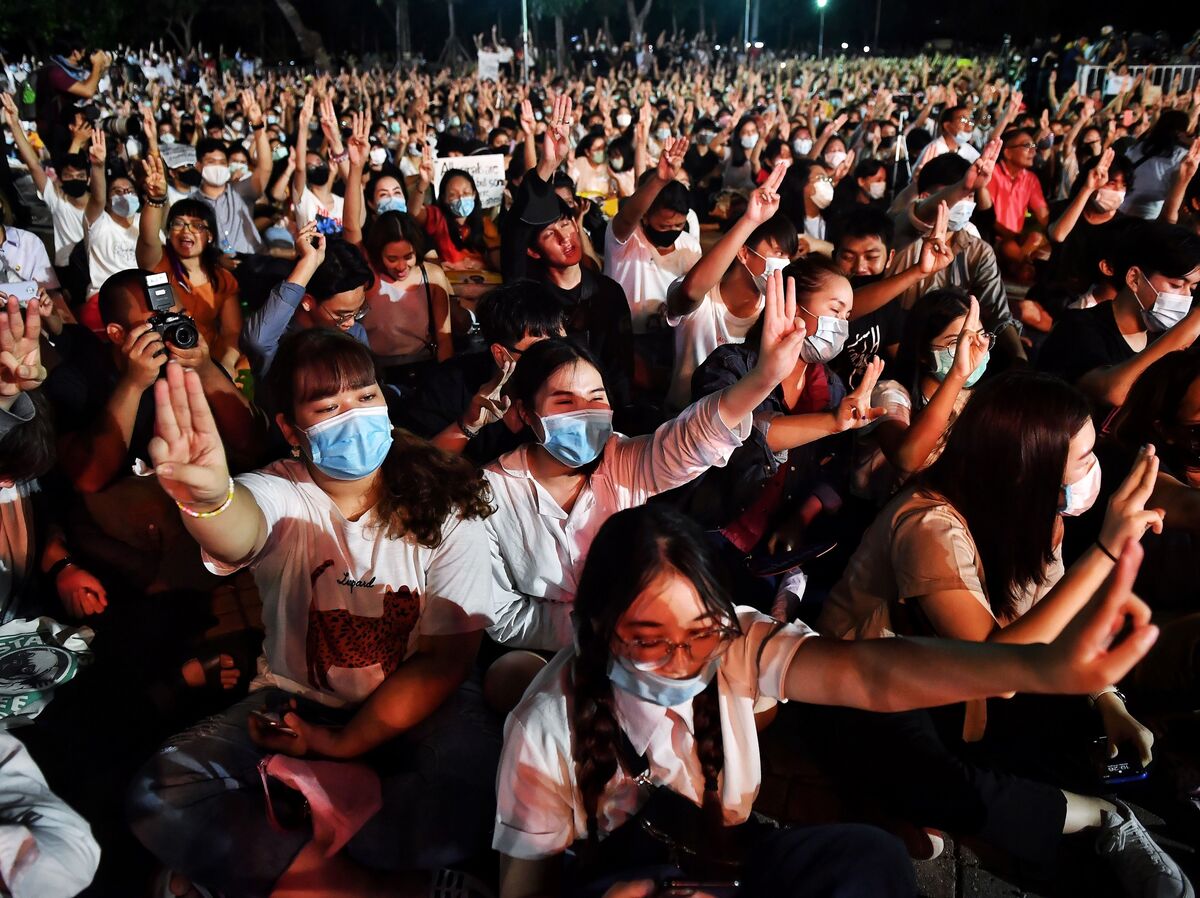 Protesters flash The Hunger Games salute during a pro-democracy rally at Thammasat University in Pathum Thani, north of Bangkok, earlier this month.

It’s a risky move, the first time in modern Thai history that the monarchy has been talked about publicly—openly—in a critical way. Panusaya is undeterred.

“I think the monarchy has to be under law like everyone in this country,” she says. “That manifesto is like the first level to change the system in Thailand.”

As she sees it, limiting the power and role of the monarchy is the only the first step toward restoring real democracy in Thailand. New elections and a new constitution to replace the one drafted by the military, who seized power in a 2014 coup, need to come next.

Thailand is a country where the monarchy and the military have been locked in a symbiotic relationship for decades and where politicians have often blurred the lines between the government and the crown, using the laws meant to protect the king, known as lese-majeste, to silence political opponents.

The manifesto read by Panusaya calls for revoking those laws, cutting back on public spending on the royal family and countering its influence over Thai politics. It caught the military backed government of general-turned-prime minister Prayuth Chan-ocha by surprise.

“The military government doesn’t know how to approach or to address this new kind of threat,” says David Streckfuss, author of a book about the Thai monarchy and laws written to shield it from public discussion-

“The Thai state is not ideologically equipped to handle such an open confrontation over something they’ve fought for decades to keep from public criticism or scrutiny,” he says. 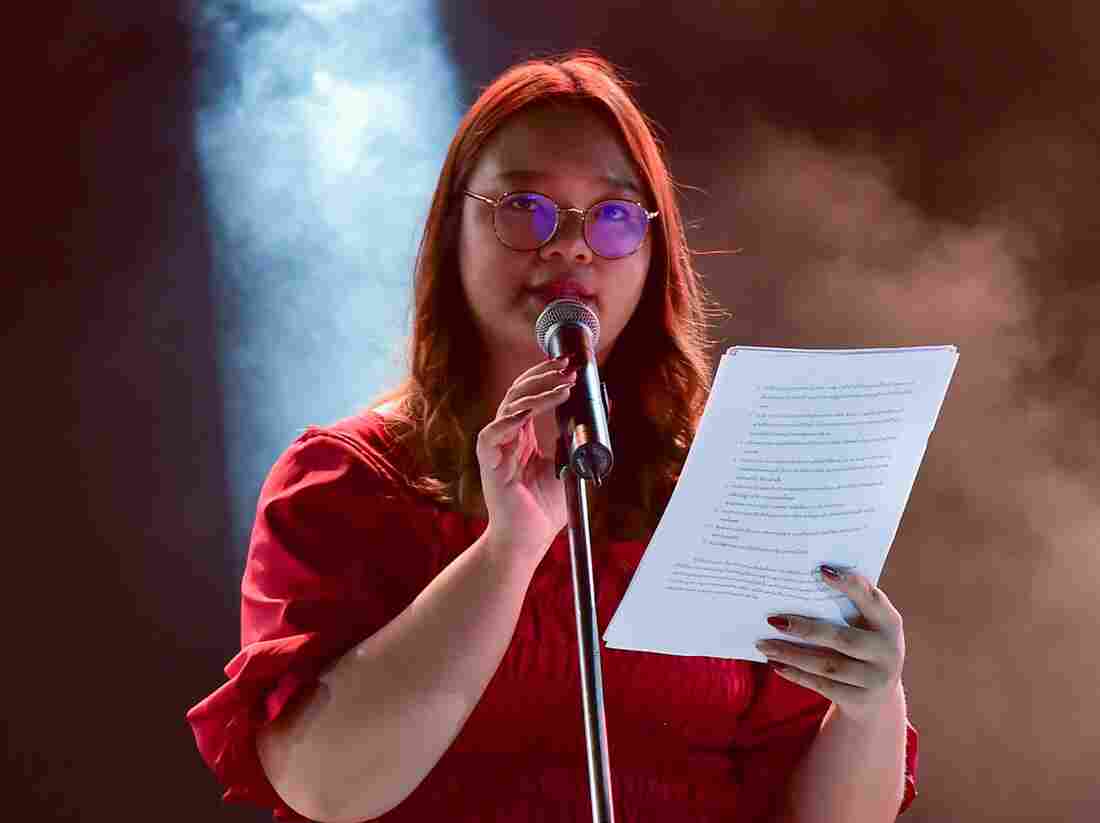 Panusaya Sithijirawattanakul reads a list of demands, including the abolition of the Kingdom’s royal defamation law, during the Aug. 10 rally at Thammasat University. Lillian Suwanrumpha/AFP via Getty Images hide caption 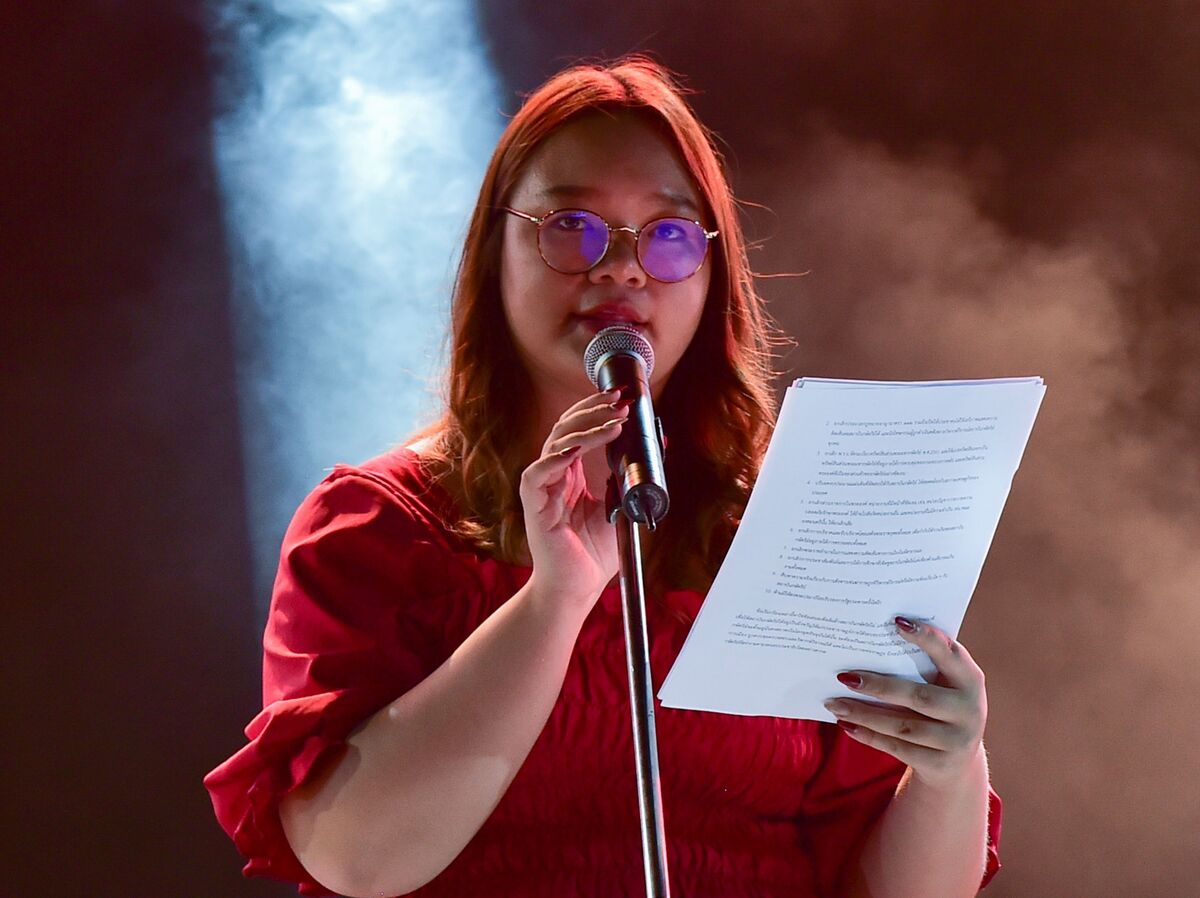 Panusaya Sithijirawattanakul reads a list of demands, including the abolition of the Kingdom’s royal defamation law, during the Aug. 10 rally at Thammasat University.

Thai authorities have arrested nearly a dozen pro-democracy demonstrators in the past week, but released many on bail as the government struggles with how best to respond. In the past, they’ve resorted to violent crackdowns—in 1973, 1976, 1992 and 2010.

The country’s powerful army chief this month sharply criticized what he decribed as “nation haters.”

Arch royalists have also vehemently denounced both Panusaya and pro-democracy protesters on Twitter and Facebook. Panunsaya says she isn’t worried.

“I have a lot of defenders who help me with that kind of people so I don’t have to worry about that because I know a lot of people agree with me,” she says.

Nearly a dozen exiled critics of the monarchy or the military have gone missing in the past few years. In December 2019, two of them washed up on the banks of the Mekong River with their stomachs filled with concrete.

“I know that. I’m not stupid,” Panunsaya says. “My head tells me it’s too risky to say things that are so harsh, but my heart is saying I know it had to be done. So I listen to my heart more.”

The youth-led, pro-democracy demonstrations are gaining traction in a country where job prospects for graduating young people are bleak. Chulalangkorn University political scientist Thitinan Pongsudhirak says it’s easy to see why. “The future is very dim. Jobs, careers, livelihoods, nowhere to be seen. And I think they’re sick and tired and fed up.”

More than 10,000 people turned out for an anti-government protest in Bangkok on Sunday — the largest such gathering since the coup four years ago that brought the military to power.

High school students have been silently displaying the three-fingered salute from The Hunger Games during the loud-speaker broadcast of the national anthem that occurs every morning throughout Thailand. Hundreds of students turned out on Wednesday at the Education Ministry with the same salute, which was banned shortly after the coup.

It’s not just young people turning out—at Sunday’s rally there was a broader cross section of Thais surrounding the Democracy Monument to hear what the protesters had to say in a country where the military backed government’s stewardship of the economy drew mixed reviews even before the coronavirus cratered it.

In a country whose King is believed to be one of the richest men in the world and where the richest 1% of the population controls more than half the country’s wealth, Panusaya says its time for change.

“Now is like a new era,” she says. “It’s our generation and if we don’t change that, then we’ll have to live like this forever. And we don’t want that.”

She says she’s ready to go to jail, or worse, for her beliefs.

An arrest warrant was issued for her on Wednesday.