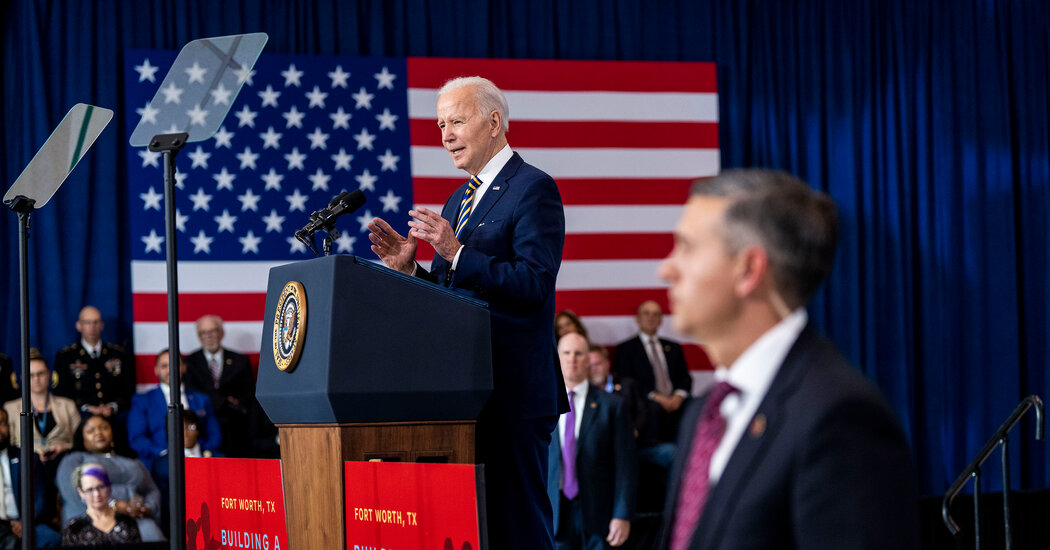 WASHINGTON — President Biden called on Tuesday for the broad expansion of health benefits for veterans, particularly those who fell ill after breathing in toxic materials from burning waste in the Iraq and Afghanistan wars, exposure that he believes contributed to the cancer that killed his elder son, Beau.

For Mr. Biden, the issue is personal and political. Last week, in his State of the Union address, he said he would pursue expanded benefits for veterans as part of a domestic agenda that the White House has retooled to emphasize bipartisan comity after failing to win passage of a more extensive social safety net plan last year.

On Tuesday, Mr. Biden briefly pivoted his attention away from a roiling war in Europe to travel with Denis McDonough, the secretary of veterans affairs, to a clinic near Fort Worth. There, the president met with veterans who had suffered spinal injuries and began coughing up black matter after serving near burn pits, as the military’s garbage disposal fires are known.

Speaking to an audience of veterans and lawmakers, Mr. Biden said it had taken years for researchers and lawmakers to better understand the harmful effects of Agent Orange, the defoliant used in the Vietnam War. He compared that situation with what he believes has been a lag in studying the effects of toxins breathed in by troops who served in Iraq and Afghanistan and were burning trash and other waste. Burn pits are typically filled with trash, such as medical waste and vehicles, which is then doused with jet fuel and burned.

Mr. Biden pointed out that he had worked as a senator to support research into the effects of Agent Orange, and he said younger veterans who had been deployed to Iraq and Afghanistan, often more than once, deserved a similar level of support.

“Today we’re even slower to connect the dots of what’s happening,” Mr. Biden said during his remarks. He pointed out that new illnesses, including bladder cancer, were still being added as possible outcomes of exposure to Agent Orange, some as recently as last year.

“Science told us more, decades after the exposure took place,” Mr. Biden said. “It took far too long to reach that decision in my view, and I refuse to repeat the mistake when it comes to veterans of our Iraq and Afghan wars.”

Proving a link between toxic substances in war zones and subsequent illnesses suffered by veterans has been politically onerous for lawmakers and prohibitively expensive for many who fall ill. But activists who have fought for benefits for years see a champion in Mr. Biden, who has long speculated that toxic substances from burn pits contributed to the brain cancer of his son. The younger Mr. Biden, who died in 2015, served in Iraq as a member of the Delaware Army National Guard.

“What better advocate can we have than the president of the United States?” Susan Zeier, whose son-in-law died of lung cancer after serving in Iraq, said in an interview. Ms. Zeier, who is part of a group of activists who have been trying for years to get the government’s attention, found a sympathetic listener in Mr. Biden.

“Some members of Congress who have been slow-walking this I think are maybe finally seeing the light,” she added.

Three members of Congress — two Democrats and one Republican — traveled with Mr. Biden to Fort Worth. One of them, Representative Jake Ellzey, Republican of Texas, recounted his own years in the military as a reason for his decision to join Mr. Biden for the event.

“There’s a lot that’s not right in our country and our world today,” Mr. Ellzey said. “These are difficult times. These are scary times. At the end of the day, we don’t put an R or D in front of veteran.”

Mr. Biden highlighted the bipartisan support for a bill, passed by the House last week, that would expand disability benefits for veterans who were exposed to toxic substances and classify more health problems as related to burn pit exposure. Senators Marco Rubio, Republican of Florida, and Kirsten Gillibrand, Democrat of New York, also have a bill to improve Department of Veterans Affairs benefits for service members exposed to burn pits.

“These are the bills that will unite the American people,” Mr. Biden said. “Let’s get those bills to my desk so I can sign them immediately.”

Opponents of the legislation passed by the House say it will only increase what are already extensive backlogs for others seeking medical care. Representative Mariannette Miller-Meeks, Republican of Iowa and a veteran, called the bill “wildly expensive” and accused its authors of partisanship.

“The people who will bear the brunt of House Democrats’ lackluster action today are the everyday Americans who need Congress to simply get the job done,” she said in a statement last week after the bill passed the House.

Both supporters and opponents of the legislation agree that more research needs to be done to determine whether illnesses veterans develop after they serve can be linked to burn pits. The Department of Veterans Affairs has said in the past that there was little evidence to prove that burn pits contributed to veterans’ illnesses, and it still advises that many symptoms should disappear after the exposure ends.

But the department also says that researchers “are actively studying airborne hazards like burn pits and other military environmental exposures,” according to an agency webpage on the subject.

Last week, the department announced that it would seek to add nine rare respiratory cancers to the list of service-connected disabilities caused by exposure to toxic chemicals in burn pits. Mr. Biden acknowledged that more research needed to be done on the links between burn pits and later illnesses, but he said he wanted the department to support veterans in the meantime.

“When the evidence doesn’t give a clear answer one way or another, the decision we should favor is caring for our veterans while we continue to learn more,” Mr. Biden said. “Not waiting, not waiting.”