In State of the Union, Biden Will Focus on Economy and Russia 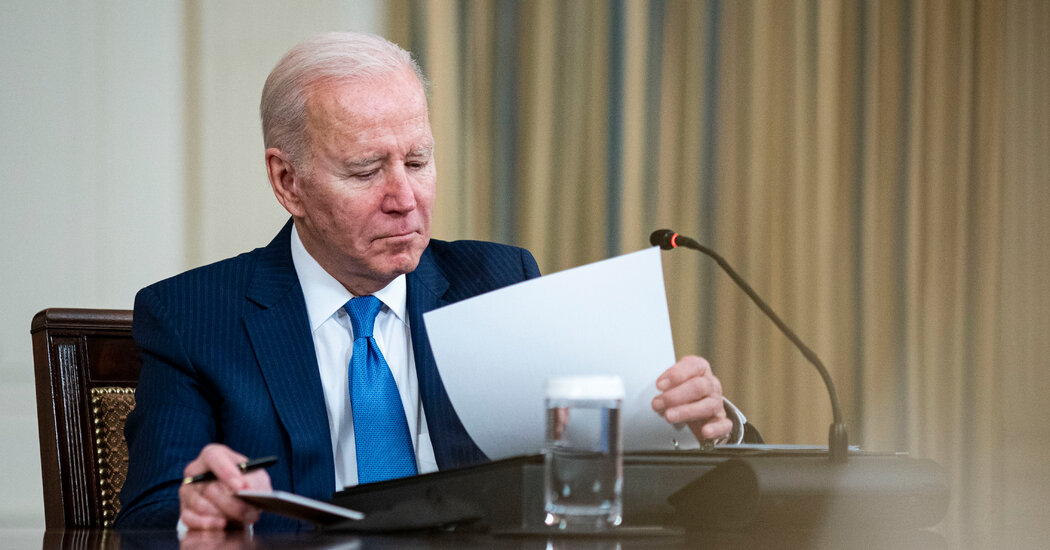 Mr. Biden will urge Congress to pass legislation, approved by the House in December, to increase the Federal Maritime Commission’s oversight of the shipping industry.

The president will deliver his remarks on Tuesday without a mask, on the same day that officials at the Centers for Disease Control and Prevention lift many Covid restrictions for communities across the country where cases, hospitalizations and deaths have plunged.

Officials announced that mask requirements for vaccinated White House employees and visitors will be dropped starting on Tuesday, a move that will allow Mr. Biden and the first lady, Jill Biden, to host their State of the Union guests at a reception that evening — something that was not allowed under previous rules.

Mr. Biden has battled the pandemic — and its effects on American work and life — since taking office, largely by vaccinating nearly three-quarters of the population. As the impact of the Omicron variant fades, administration officials have been hoping to move into a new phase of the pandemic, where the virus plays less of a central role in everyday life.

While the White House is working on a detailed coronavirus response strategy for the next phase of the pandemic, Mr. Biden is not likely to unveil it during his speech. Instead, he is expected to speak about the coronavirus pandemic in broad strokes, invoking the same “things are getting better, but we are not out of the woods yet” tone that he has adopted in recent weeks.

A White House official, speaking on the condition of anonymity to preview the president’s remarks, said Mr. Biden would “highlight that the country has made tremendous progress” over the past 13 months, and remind Americans that the nation has tools — including vaccines and treatments — to prevent severe disease and to treat those who do get sick.

Mr. Biden has been criticized for prematurely declaring “independence” from the virus last summer, only to see a new wave of infection and death from the Delta variant later that year. White House officials are wary of making that mistake again.

While cases are declining and the immediate threat is waning, Mr. Biden will also note that the virus is unpredictable, and will assure the nation that his administration is taking steps to prepare for future variants.