In Portland, a Prosecutor Must Decide: Which Protesters Should Go to Jail? 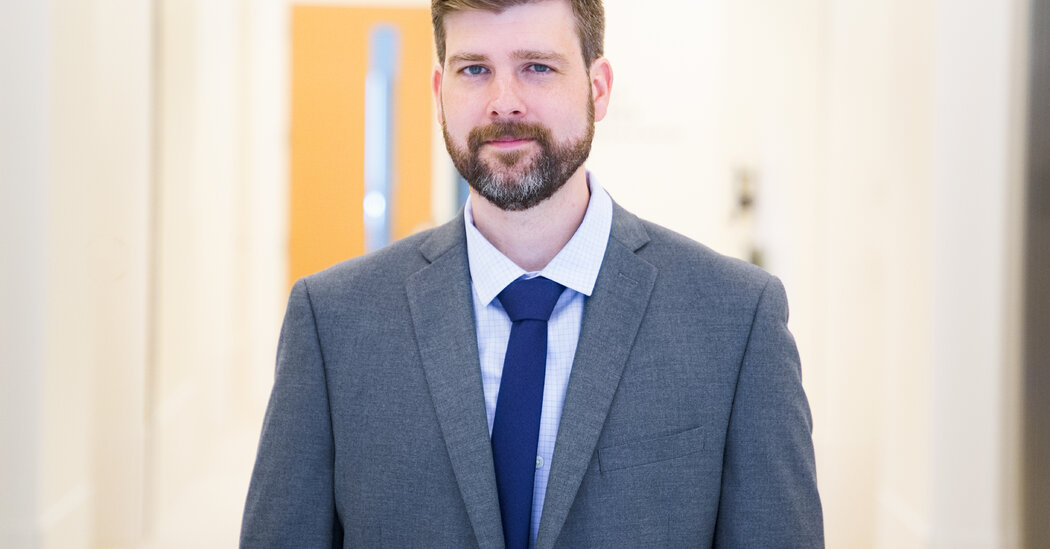 Just weeks after President Trump’s administration agreed to pull back federal officers from demonstrations in Portland, Ore., where his attempt at a high-profile crackdown backfired, the fate of the city’s protests now rests to a large extent with an altogether different leader: A brand-new, 39-year-old district attorney whose approach to enforcing the law is as contested as the demonstrations themselves.

The new prosecutor, Mike Schmidt, took office Aug. 1 after defeating an experienced federal prosecutor by a 3-to-1 margin in Multnomah County, which includes most of Portland. Even his critics say the breadth of his victory gave him a mandate to reshape prosecutions in Portland, a city of frequent protests, where there is no clear end in sight to demonstrations against police brutality that began after the killing of George Floyd in Minneapolis.

He has not been slow to shake things up: Ten days after taking office, Mr. Schmidt effectively dismissed charges against more than half of about 600 people arrested since the protests began at the end of May.

His directive met with strong objections from the Portland police and Multnomah County sheriff. But it was in keeping with his progressive campaign platform as one of a new generation of prosecutors across the country who are pledging to reduce penalties for low-level nonviolent crimes.

Mr. Schmidt said his office would presumptively decline to prosecute demonstrators for minor offenses such as interfering with the police, disorderly conduct and trespassing — cases that did not involve deliberate violence, property damage or theft. And charges for assault on officers and resisting arrest will now require closer scrutiny, with prosecutors taking into account in filing charges whether the police fired tear gas into crowds.

The purpose, Mr. Schmidt said, is to balance “people’s righteous anger and grief and fury over a system that has not really been responsive enough for decades and centuries” with the need to prevent property damage and violence.

“At a time when legitimacy in our criminal justice system is probably at an all-time low, we can’t be seen to be using that very system to silence the speech that is being critical of it,” he said. “How do you design a policy with all of those competing goals? That’s really the line we tried to walk.”

He said the strategy allowed him to put greater resources toward more serious cases, like the 15 homicides that made July the city’s deadliest month in decades. The coronavirus crisis has also left courts able to handle fewer cases, and Mr. Schmidt faces pressure not to crowd the jail.

There has been pushback from law enforcement. Mr. Schmidt said Portland police leaders told him that they were concerned the directive would lead to more police injuries, though he said nothing prevented officers from making lawful arrests they deemed necessary. (The Portland police chief, Chuck Lovell, said the force “will continue to do the job the community expects of us.”)

The sheriff, Mike Reese, warned Mr. Schmidt in an email that some protesters were bent on “starting fires, damaging property and assaulting police, community members,” adding, “They may feel even more emboldened if there is a public statement that appears to minimize their activities.” In response to one of the sheriff’s concerns, Mr. Schmidt said he revised the policy to greenlight prosecutions for rioting in cases where a defendant was accused of serious offenses.

The Oregon State Police also took a parting shot at Mr. Schmidt as troopers pulled back after a two-week deployment at the protests this month, saying they preferred to put resources in “counties where prosecution of criminal conduct is still a priority.” The governor, Kate Brown, a Democrat who endorsed Mr. Schmidt, made clear on Twitter that the State Police had always planned to withdraw after two weeks, and that they could be sent back if needed.

Since protests erupted around the country in the wake of Mr. Floyd’s killing in police custody, Mr. Trump has vowed to send federal agents to cities where he said liberal leaders were not doing an adequate job of keeping the peace. In Portland, federal officers who were sent in over the city’s objections engaged in almost nightly conflict with protesters at the downtown federal courthouse, with demonstrators lobbing firecrackers, water bottles and other objects at the agents, who often responded with tear gas and wide-ranging arrests.

Only the federal government’s agreement to a conditional pullback restored a measure of stability, though protesters then turned their attention back to the local police.

Portland’s feud with Mr. Trump is not necessarily over: On Wednesday, the White House chief of staff, Mark Meadows, said on Fox News that “it looks like we’re going to have to” send federal agents back to the city. Last week, federal officers, who had not entirely left town, clashed with protesters for the first time since July. The opening of the Republican National Convention this week gives Mr. Trump and his allies another opportunity to attack the city’s response to the demonstrations.

Mr. Schmidt began his journey to the district attorney’s office by teaching public high school in New Orleans, where all of his students were Black. The experience had a profound effect on him.

He remembers one student, a 14-year-old accused of possessing marijuana, who escaped punishment only because a camera captured on video an officer planting drugs. And he once asked students if they wanted to go to college. Few raised their hands, as others explained that, with the escalating gun violence in the city, they expected be dead by 22 or 23.

“I asked them, ‘How many of you know somebody who has been shot,’ and everybody’s hand went up — I just couldn’t even wrap my mind around that,” he said, adding, “It was a really formative thing for me.”

Mr. Schmidt was elected district attorney in Portland on May 19, about a week before Mr. Floyd’s death in Minneapolis. In his new job, he credits the persistence of the protests that happened afterward for spurring deeper, more substantive conversations about criminal justice inequities.

But he is also quick to acknowledge how febrile those discussions have become, taking place daily in the streets.

“I’m scared to death that somebody’s going to get seriously hurt, if not killed,” he said. “Tensions are ramping up.”

On Saturday, right-wing and left-wing groups brawled in front of the federal courthouse, with bottles and punches thrown. Some right-wing protesters carried assault weapons and other guns, while Black Lives Matter demonstrators carried shields or paintball guns. They were eventually dispersed not by the local police, but by federal officers.

Last week, Mr. Schmidt’s office filed charges against a 27-year-old man accused of firing two rounds from his vehicle near counterprotesters during an afternoon rally in support of the police that was sponsored by local right-wing organizers. No one was injured.

Another man, Adam Haner, was beaten unconscious a few blocks away from a Black Lives Matter rally on Aug. 16 Though the circumstances remain unclear, video of the attack, showing a man forcefully kicking Mr. Haner’s head has circulated widely and has been used by right-wing groups as a rallying point. Senator Lindsey Graham, Republican of South Carolina, condemned the “shocking attack by a mob” and called for federal prosecution.

The man suspected of kicking Mr. Haner, Marquise Love, turned himself in Friday to the Portland police, who booked him for felony assault. Mr. Schmidt said he could not comment on the case while his lawyers reviewed it, but said he was “sickened by what I saw” on the video, adding: “It’s squarely the type of conduct that I don’t want to see happening, and where we have the evidence to go forward on cases like that, we’re absolutely going to do that.”

Still, he said there was no easy way to weed out violent protesters. “It’s old-fashioned police work,” he said, adding that violent outbreaks may persist “until people just don’t want to do it anymore.”

While some Portland residents are fed up with the mayhem downtown, many have been supportive of the district attorney’s approach.

“This is a city that likes to protest,” said Aliza Kaplan, a professor and director of the criminal justice reform clinic at the Northwestern School of Law of Lewis & Clark College in Portland, where Mr. Schmidt earned his law degree. She predicted Mr. Schmidt’s approach may ease frictions: “There’s a calming effect to just having a policy that says, ‘This is what we’re going to do, and this is what we’re not going to do.’”

Andrew Phelps, who was downtown near the protests on Saturday, said Mr. Schmidt was in the difficult position of trying to tamp down chaos while not criminalizing peaceful dissent. Charging those who did not injure anyone may do more harm than good, he said, adding, “It’s a difficult situation, and the solutions will be difficult as well.”

Larry Myers, another resident, said he had avoided the protests. He said that he supported charging people who rioted, but that he believed “genuine protesters, they should be granted clemency.”

Mr. Schmidt’s opponent during the campaign for district attorney, Ethan Knight, a longtime federal prosecutor, said he worried that Mr. Schmidt had boxed himself in.

“It’s a risky and a fraught position to decide unequivocally that you’re not going to prosecute riot cases and a number of other offenses in a fluid law enforcement environment, because you constrain law enforcement,” Mr. Knight said.

The policy faces a real test, too, Mr. Knight added, if the police arrest more members of right-wing groups.

“You have to apply this in an evenhanded manner, even if the public supports one side or the other,” he said, “because that’s your job.”

Already, a lawyer for Joey Gibson, a right-wing leader arrested last year on a riot charge, has demanded that the case be dismissed because it will not meet Mr. Schmidt’s new standard.

“It’s classic selective prosecution,” said the lawyer, James Buchal, who is also chairman of the Multnomah County Republican Party. He characterized the district attorney’s view as, “We like these rioters, but we don’t like your guy.”

But Mr. Buchal accepts that Mr. Schmidt won a mandate, believing it will confirm H.L. Mencken’s observation that “democracy is the theory that the common people know what they want, and deserve to get it good and hard.”

Mr. Schmidt said that he believed the Gibson case merits prosecution, and that he was confident his office would prevail. He acknowledges, though, that even if constituents are largely supportive, he is still adjusting to vitriol from across the country.

“You get a voicemail and it says, “Hi, this is Jim Smith. I’m calling from blah, blah, blah. I hope you die!’” Mr. Schmidt said. “It’s really kind of shocking.”

Trump has raised $207.5 million since Election Day combined with the Republican Party.

Lon Adams, Who Gave the Slim Jim Its Flavor, Dies at 95