In Louisville, calls for racial justice arrive at the polls 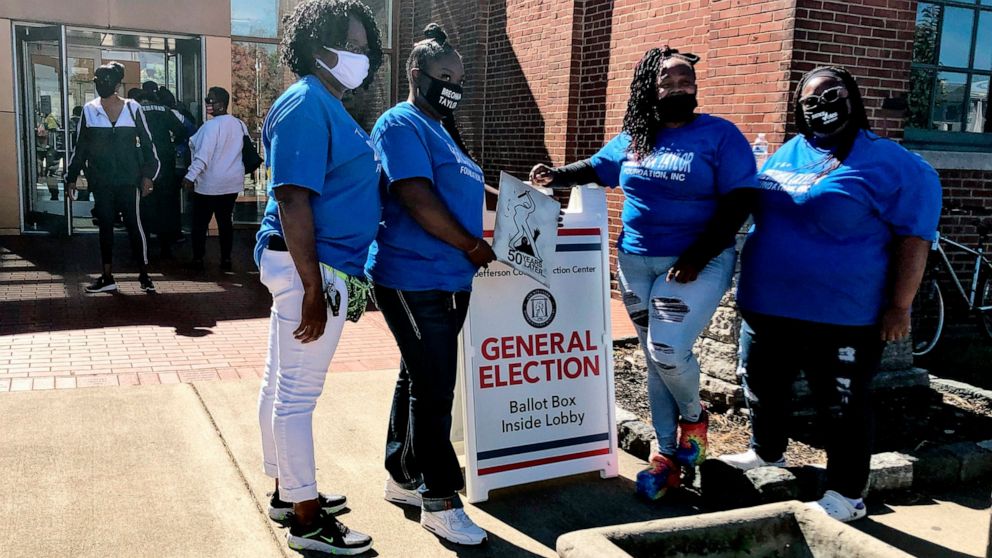 On the first day of early voting in Kentucky, Breonna Taylor’s mother on Tuesday has joined an effort to take the fight for justice for her daughter to the ballot box

LOUISVILLE, Ky — Frustrated by what she felt was inadequate justice for her daughter’s fatal shooting, Breonna Taylor’s mother on Tuesday joined an effort to take the fight to the ballot box.

“Vote because she can’t,” Tamika Palmer implored demonstrators gathered for a “Protest to Power” caravan to the polls on the first day of early voting in Kentucky.

Clutching an absentee ballot in her hand and flanked by family members and local activists, she joined a parade of cars, trucks and buses through Louisville’s predominantly Black West End in an effort to get out the vote in the state’s largest city.

Organized by the Louisville Urban League, Kentucky NAACP, and many other other activist organizations, the caravan was greeted by cheers at the Kentucky Center for African American Heritage, one of four polling places open to voters nearly three weeks before Election Day.

Louisville has been rocked by protests over the death of Taylor, a Black woman who was shot multiple times by police during a botched drug raid in March. After a summer of protests that put her name on the lips of celebrities and activists nationwide, demonstrations continued after a grand jury indicted one officer on wanton endangerment charges in September for the shooting. But no officers were charged in connection with her death.

Anticipating a record turnout on Nov. 3, election officials throughout the country have encouraged voters to cast their ballots early. Sadiqa Reynolds, the president and chief executive officer of Louisville Urban League, repeated that call, urging demonstrators to see voting as a way to force tangible change for Black Americans.

After the original plan by Jefferson County Clerk Bobbie Holsclaw contained only eight polling places, bipartisan backlash led to an expansion. The county added 12 more locations to spread out voting locations through the county of roughly 600,000. The expansion to the heritage center made it easier for voters like Kylan Crawford to cast their ballot.

Crawford, 62 and a lifelong resident of Louisville, took in the scene on Tuesday afternoon with pride. Though he had cast his vote relatively quickly, he stayed for the caravan’s festive atmosphere, amplified by loud dance music and food trucks. He liked to see the demonstrators at the polls, he said, because voting is the best way to bring about reform.

“This is what I call a healthy turnout,” Crawford said. “That’s the way you make changes. You don’t have to go out here and burn (things) up.”

Not all voters shared the same measure of optimism.

Jasmine Sutton worried that her absentee ballot had yet to arrive. In Kentucky, absentee ballots need to be postmarked by Nov. 3 and received by Nov. 9 to be counted, but Sutton doubted that mailing her ballot would get it in by the deadline. Instead, she’s committed to sliding it in at the drop-off box at the Kentucky Center for African American Heritage. She hopes other young Black voters will do the same.

“If they really want to make a difference, they would come vote,” she said. “If they’re not out here for a reason, they don’t care.”

Hudspeth Blackburn is a corps member for the Associated Press/Report for America Statehouse News Initiative. Report for America is a nonprofit national service program that places journalists in local newsrooms to report on undercovered issues.