In Kenosha this week, the contrast between Trump and Biden was strong. 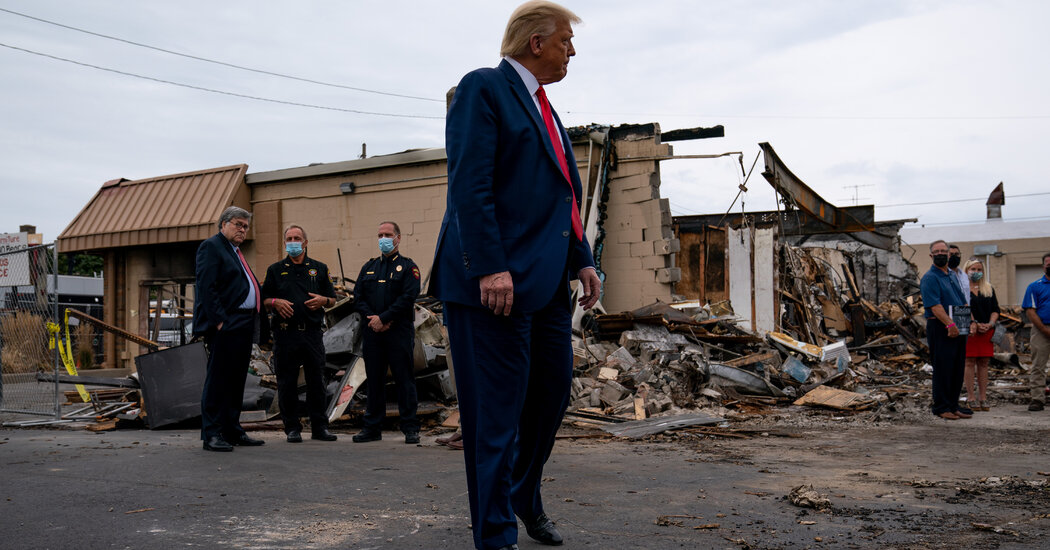 KENOSHA, Wis. — The usual campaign-friendly stops were spurned. There was no grilled bratwurst or Wisconsin frozen custard to eat for the cameras. The candidates’ motorcades did not pull over at Tenuta’s Deli, a 70-year-old local institution whose walls are lined with the obligatory framed photographs of visiting politicians.

The campaign trail returned in a scaled-back form to Kenosha this week, as President Trump and Joseph R. Biden Jr. arrived in town for back-to-back events, each striking a sharply different tone in a city struggling with civil unrest and the coronavirus pandemic. Here are three takeaways from a week focused on Wisconsin:

Mr. Trump played to his base.

The president arrived on Tuesday, crunching through the rubble of burned buildings in Kenosha’s Uptown district and meeting with a group of local officials at a high school, including the county sheriff and the city’s police chief. He did not meet with the family of Jacob Blake, who was shot by a police officer on Aug. 23 and remains in a hospital.

Mr. Trump struck a law-and-order note, condemning the destruction that has scarred Kenosha. “These are not acts of peaceful protest but, really, domestic terror,” he said.

Mr. Biden pressed his case that he can bridge the nation’s widening divides.

When the Democratic nominee arrived on Thursday, he first met with the Blake family, a conversation that a family representative described as engaging and prayerful. Then he headed to Grace Lutheran, a church that stands out in the community for its warmth, giving away meals and household supplies to Kenosha families.

In front of a carefully selected group of community leaders, Mr. Biden, too, condemned violence, but promised to focus on correcting racial disparities if elected. “I’m going to go down fighting for racial equality, equity across the board,” he said.

In Kenosha, few people showed up for either candidate.

This city of 100,000 people is still boarded up, frozen in place even though it has been a week since any violent unrest. Marches and protests have dwindled. And only a few relatively small, scattered groups seemed interested enough on either day to catch a glimpse of a sitting president or the former vice president.