In Georgia, Trump Tries to Revive a Sputtering Campaign 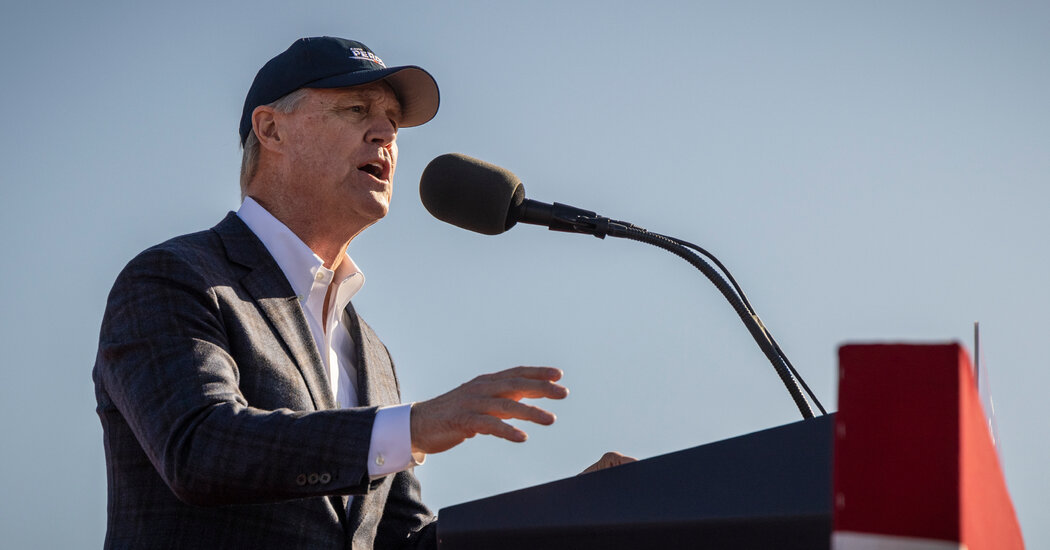 COMMERCE, Ga., — When Donald Trump recruited David Perdue to run for governor of Georgia, Mr. Trump’s allies boasted that his endorsement alone would shoot Mr. Perdue ahead of the incumbent Republican governor, Brian Kemp. Georgia Republicans braced for an epic clash, fueled by the former president’s personal vendetta against Mr. Kemp, that would divide the party.

But two months out from the Republican primary election, Mr. Perdue’s campaign has been more underwhelming than epic. In an effort to boost Mr. Perdue and put his own stamp on the race, Mr. Trump came to Georgia on Saturday for a rally for Mr. Perdue and the slate of candidates the former president has endorsed. Thousands of Trump supporters turned out in the small city of Commerce, 70 miles northeast of Atlanta and about 20 miles outside of Mr. Kemp’s hometown, Athens.

Early polls have steadily shown Mr. Perdue, a former senator, trailing Mr. Kemp by about 10 percentage points. The governor has the backing of many of the state’s big donors and remains far ahead of Mr. Perdue in fund-raising. After pursuing a deeply conservative legislative agenda, Mr. Kemp has secured support from most of the top state leaders and lawmakers, even those who have, until now, aligned with Mr. Trump.

Mr. Perdue’s sputtering start may hint at a deeper flaw in Mr. Trump’s plan to punish the governor for refusing to work to overturn Georgia’s 2020 election results: Mr. Trump’s grievances may now largely be his alone. While polls show many G.O.P. voters believe lies about fraud and irregularities in the 2020 election, there is little evidence that Republicans remain as fixated on the election as Mr. Trump. The challenge for Mr. Perdue, as well as for other candidates backed by Mr. Trump, is to make a case that goes beyond exacting revenge for 2020.

“When you’re running against an incumbent governor, it’s a referendum on the incumbent,” said Eric Tanenblatt, a chief of staff to former Georgia Gov. Sonny Perdue, the former senator’s cousin. “And if the incumbent has a good track record, it’s going to be hard to defeat him.”

Mr. Tanenblatt backed David Perdue’s past Senate campaigns, including his losing bid last year. But Mr. Tanenblatt is now among the Republicans worried that Mr. Perdue is merely distracting the party from its top goal: fending off the likely Democratic nominee, Stacey Abrams.

“Donald Trump’s not on the ballot. And there has to be a compelling reason why you would vote out an incumbent,” Mr. Tanenblatt said. “I don’t think there is one.”

“Let me be very clear. Very clear,” Mr. Perdue said to the crowd. “In the state of Georgia, thanks to Brian Kemp, our elections were absolutely stolen. He sold us out.”

Mr. Perdue’s allies argue that Governor Kemp’s track record is forever tainted by his refusal to try to overturn the election results or call a special legislative session to review them, even though multiple recounts confirmed Joe Biden’s win.

“That’s the wound with the salt in it right now that hasn’t healed,” said Bruce LeVell, a former senior adviser to Mr. Trump based in Georgia. “David Perdue is the only one that can unify the Republican Party in the state of Georgia. Period.”

Michelle and Chey Thomas, an Athens couple attending the rally, said they were unsure whether they would support Mr. Perdue in the primary or vote to re-elect Mr. Kemp as they knew little of Mr. Perdue before Saturday. Like many attendees, they were unsure if they could trust the results of the 2020 election. And Mr. Kemp, they believe, did not exercise the full extent of his power in November 2020.

“A lot of candidates say they are going to do something and don’t,” Ms. Thomas said. Mr. Kemp, she added, “could’ve done a lot better job.”

Mr. Kemp has had years to guard himself against a challenge from the party’s Trump wing. He was one of the first governors to roll back Covid-19 restrictions in early 2020, drawing the support of many on the right who were angry about government-imposed lockdowns. Last year, he signed into law new voting restrictions that were popular with the Republican base. And in January, the governor backed a law allowing people to carry a firearm without a permit and another banning mailed abortion pills.

That record, Kemp supporters argue, won over Republican base voters, even those who agree with Mr. Trump that Mr. Kemp did not do enough to fight the election results in Georgia.

“I think they’ve turned the page on the election,” said State Senator Clint Dixon, a Republican representing the Atlanta suburbs. “And folks that may have been upset about that, still, they see that Governor Kemp is a proven conservative leader that we need.”

Of Mr. Trump’s rally, he added: “I don’t think it does much. And the polls are showing it.”

Mr. Kemp has amassed a war chest of more than $12.7 million, compared with the $1.1 million Mr. Perdue has raised since entering the race in December. The Republican Governors Association has also cut more than $1 million in ads supporting Mr. Kemp — the first time the organization has taken sides in a primary race. (Since December, Ms. Abrams has been raising more than both men, bringing in $9.3 million by January.)

Mr. Kemp has worked to line up key Republican leaders — or keep them on the sidelines. Earlier this month, he appointed Sonny Perdue chancellor of the state’s university system. The former governor intends to remain neutral in the primary, according to people familiar with his plans.

Since losing Georgia by fewer than 12,000 votes in 2020, Mr. Trump has tried to turn the state’s politics into a proxy war over his election grievances. He blamed Mr. Kemp for his loss, saying he did not win Georgia because the governor refused to block certification of the results. Mr. Trump’s attempt to overturn the results is under criminal investigation.

Mr. Trump saw Mr. Kemp’s refusal as disloyal, in part because Mr. Trump endorsed the governor in a 2018 primary, helping to propel him to a decisive win.

“It is personal,” said Martha Zoller, a Georgia-based conservative radio host and former aide to both Mr. Kemp and Mr. Perdue. “President Trump believes that he made Brian Kemp.”

Now Mr. Perdue’s campaign is looking for the same boost from Mr. Trump. Although Mr. Perdue’s ads, social media pages and campaign website note that he is endorsed by Mr. Trump, Mr. Perdue’s campaign aides believe many voters are not yet paying attention and do not know that he has Mr. Trump’s support. The former corporate executive has been a Trump ally, but he hardly exuded the bombast of his political benefactor during his one term in the Senate.

Mr. Perdue is now running to the right of Mr. Kemp. He recently campaigned with Representative Marjorie Taylor Greene at a rally in her rural northwest Georgia district, even after the congresswoman appeared at a far-right conference with ties to white supremacy.

At the rally, Mr. Perdue lamented the “assault” on Georgia’s elections and reminded the crowd that he “fought for President Trump” in November 2020. At the time, he said, he asked not only for Mr. Kemp to call a special legislative session, but also for the resignation of Georgia’s current secretary of state, Brad Raffensperger — remarks received with loud applause.

Although Mr. Perdue’s campaign has largely focused on the 2020 election, he and Mr. Kemp have split over other issues. Mr. Perdue opposed construction of a Rivian Automotive electric truck factory in the state, saying that the tax incentives it brings could benefit wealthy liberal donors. Mr. Kemp embraced the deal as a potential economic boon.

Mr. Perdue also split with Mr. Kemp when Mr. Perdue gave his support to a group of residents in Atlanta’s wealthy Buckhead neighborhood who are seeking to secede from the city. The idea gained traction among some who were concerned about rising crime rates in Atlanta, but the effort is now stalled in the state legislature.

If Mr. Trump was concerned about the campaign, he didn’t show it at the rally. Before bringing Mr. Perdue onstage later in the evening, he promised supporters that the former senator would champion election integrity and defeat Stacey Abrams.

“That’s a big crowd of people,” he said. “And they all love David Perdue.”