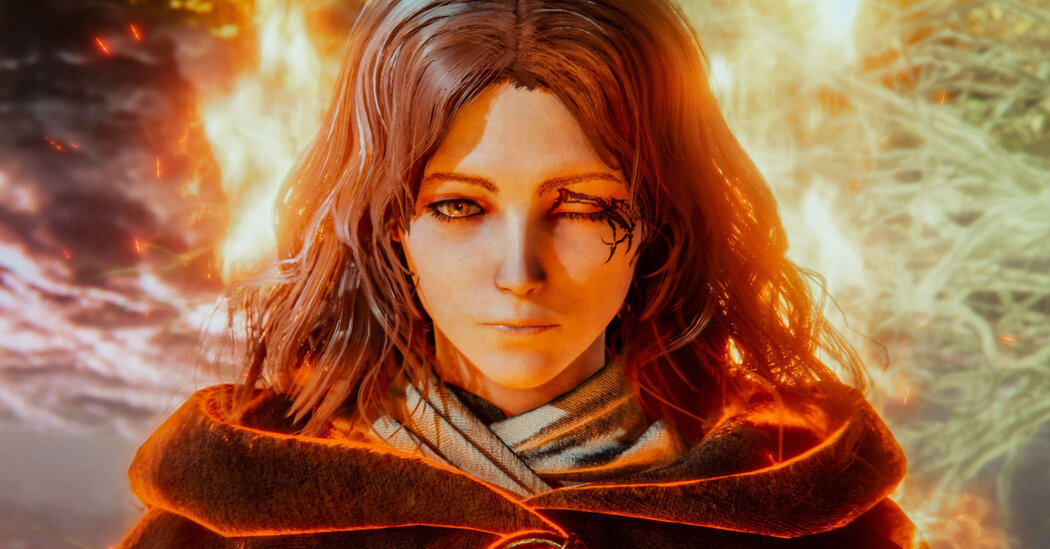 In the last two years, the pandemic has brought us many works of art that have tried to definitively capture humanity’s struggle. There was that movie with Leonardo DiCaprio turning pink as he shouts at the top of his lungs for people to look up at the comet hurtling toward Earth. It was so on the nose that it provoked little thought: Yes, we are divided, likely doomed. What of it?

No medium has come as close to perfectly encapsulating Our Situation as video games. In the beginning, when many of us were in lockdown and baking mediocre sourdough, we played Animal Crossing, which involves finding comfort in simple tasks like fishing and gardening while stranded on an island. This year, we are playing Elden Ring, a ruthlessly difficult game that gets only harder the more you play it. That about sums up what it’s been like to live in a pandemic.

Elden Ring has a story that has something to do with a ring, but more important is its design: It’s an open-world game, meaning you can do whatever, whenever you want. Players will ride a horse through a poison swamp, sprint across molten lava and traverse a crumbling bridge surrounded by tornadoes, fighting or evading enemies along the way.

No matter what you choose to do, you’ll probably die again and again trying to do it, sometimes for hours. That’s because the slightest mistiming of a button press will make you fall to your death or open you to attack. Even the most experienced gamers will die dozens of times in a dungeon before reaching the boss — the main villain at the end of a game level.

None of this makes Elden Ring sound like a crowd pleaser, but the video game — a collaboration between the creative director Hidetaka Miyazaki and the “Game of Thrones” author George R.R. Martin — is on track to become the best seller of the year, with 12 million copies sold within a month of its release in February.

At some point in the game, you face a dragon. You have a choice to fight or flee. At first, you’ll probably retreat, and eventually, after acquiring enough strength and the proper weapon or magic spell, you’ll return to slay the dastardly fire-breather and relish your victory. Moments later, though, you’ll be ambushed and killed by something nasty, like a hawk that’s gripping razor blades in its talons.

It’s difficult to imagine Elden Ring having this sort of cultural cachet in any other era. In Year 3 of the pandemic, as vaccination rates have risen and hospitalization cases have dipped in some areas, offices, schools and restaurants have reopened. To many Americans, the dragon has been slain. Yet in other parts of the world, a new variant of the coronavirus is driving another wave, and in New York, cases are beginning to climb again.

As some of us let our guard down to have some semblance of a normal life, we are bracing ourselves for that stupid bird around the corner that still might kill us. Our hard-learned lesson of the pandemic — to expect disappointment and more struggle — has trained us well for Elden Ring.

Where the DiCaprio movie, “Don’t Look Up,” was polarizing because it picked a side that criticized anyone in denial of the apocalypse, Elden Ring’s choose-your-own-adventure format is more inclusive for a populace that can’t seem to agree on anything. In Elden Ring, there is no right or wrong.

To defeat a boss, you can carefully study its moves and plan an attack, or you can “cheese” it with a cheap trick that requires no skill and ensures victory. Either way, a win is a win. Such a flexible game may resonate with players worldwide and bring them together in a time when people are choosing their own truth about masks, shots and information they read online in general.

Players mostly suffer through Elden Ring alone, but there are parts so difficult, like an ultratough boss fight, that people will need to get help from others online. To accommodate this, the game erects small statues in challenging areas that act as summoning posts to bring in a cooperator. Once the mission is complete, the good Samaritan disappears.

Struggle has always been a central theme in the games of Mr. Miyazaki, who rose to fame with the modest success of the Dark Souls trilogy, Elden Ring’s predecessors, but so is the need for people to turn to one another.

Mr. Miyazaki, who didn’t respond to requests for comment, has said in interviews that he was inspired by a personal experience many years ago when he was driving up a snow-covered hill. A car in front of him got stuck, and so did he and one behind him, but then another car in the back drove forward and started pushing the third car. Similar assistance eventually got everyone over the hill.

“We come into each other’s lives for a minute and disappear and still make an impact,” said Keza MacDonald, the video games editor for The Guardian and author of “You Died,” a book about Mr. Miyazaki’s games. “It’s not really one player versus the game. It’s the entire community of players versus the game.”

By the time I had finished Elden Ring, with some help from friends and strangers online over about five weeks, I didn’t come out of the game feeling more anxious or pessimistic. I ended up making plans with friends I hadn’t seen in two years.

Many of us have endured the pandemic alone because restrictions and health risks make it difficult to travel and gather indoors. It has been an impossible situation to navigate, and the struggle goes on, but we’re in this together for the long haul. Why not turn to one another?