‘Impressive’ Winter Storm to Sweep the U.S. Through Saturday 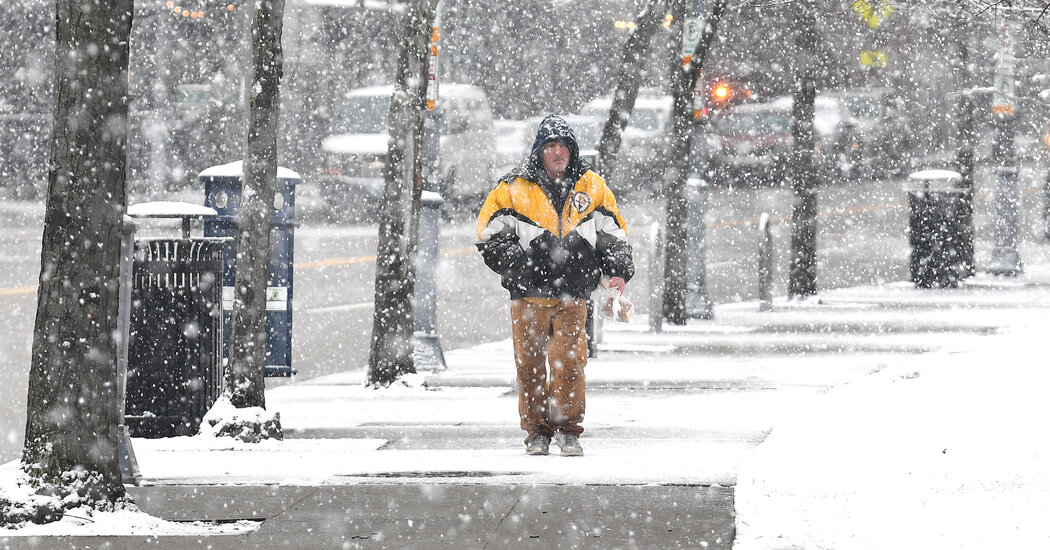 A sprawling, late-season winter storm was forecast to dump a mixed bag of precipitation across a wide swath of the United States through Saturday, raising concerns about hazardous driving conditions and scattered power outages, meteorologists said on Friday.

About 70 million people from Arizona to Tennessee and up through Maine were under some sort of winter weather alert, according to the National Weather Service. The interior Northeast was expected to get the worst of the storm.

“It’s a pretty impressive storm system,” Matthew Clay, a meteorologist with the Weather Service in Burlington, Vt., said on Friday morning. “For interior New England, we’re expecting pretty much a widespread seven to 14 inches of snow.”

Light snow will fall from the Southern Plains to Wisconsin on Friday on the backside of a cold front crossing the central United States, the Weather Service said. That front will strengthen, leading to the development of a significant winter storm across the Tennessee and Ohio Valleys through the eastern part of the country this weekend.

Areas across North Texas and southern Oklahoma were expected to receive a few inches of snow through Friday morning. Similar snow totals were expected for areas around eastern Tennessee through Saturday evening, and as much as five inches of snow could fall across portions of Kentucky.

The Northeast was most likely to see the greatest snow accumulations, forecasters said. Areas around Albany, N.Y., could see up to four inches of snow. Towns farther north could see as much as 12 inches. In Vermont, between seven and 14 inches was forecast for much of the state.

“We’re expecting very difficult travel conditions during the day on Saturday and into Saturday night,” Mr. Clay said of the upper Northeast. “We discourage travel, unless you need to do it, and also be prepared for isolated power outages as some of the snow we’re experiencing will be wet.”

Cities closer to the coast, including New York City and Boston, were expected to see a mix of rain and snow, with significantly less accumulations.

This weekend’s storm follows a pattern of active winter weather throughout much of the South and East Coast this year.

In early January, back-to-back storms created perilous driving conditions in the Mid-Atlantic and Northeast, including one weather system that stranded hundreds of drivers on Interstate 95 in Virginia for more than 24 hours. The storm trapped truckers, students, families and every stripe of commuter, including Senator Tim Kaine.

In mid-January, another storm slammed the South, killing at least two people and leaving thousands without power before moving north and dropping heavy snow over parts of the Northeast and Canada. Another January storm swept through the East Coast, prompting thousands of flight cancellations and pushing the governors of New York and New Jersey to declare states of emergency. That storm dropped more than 30 inches of snow in parts of Massachusetts.

In early February, another storm slammed parts of Texas with snow and sleet, disrupting travel and power. Gov. Greg Abbott called it “one of the most significant icing events that we’ve had in the state of Texas in at least several decades.” Yet another storm followed in late February, lashing the Northeast with a mix of snow, sleet and rain.