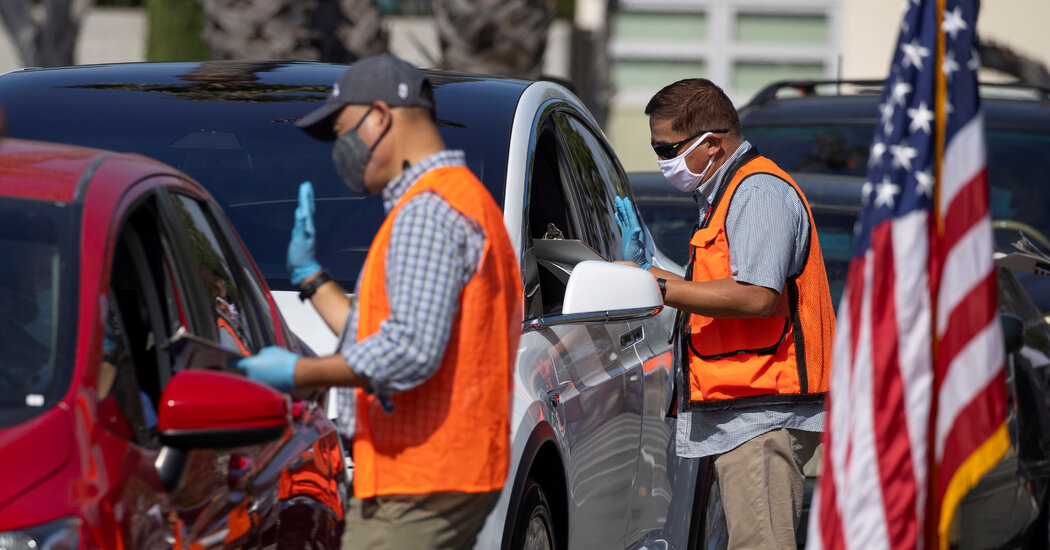 WASHINGTON — The federal agency that oversees legal immigration canceled furloughs to 70 percent of its work force on Tuesday, shifting the cost savings to other parts of the agency’s operations, such as the processing of citizenship applications.

The planned furloughs at the agency, United States Citizenship and Immigration Services, prompted by a precipitous drop in the immigration processing fees that fund it, would have brought the immigration system to a near halt, immigration experts say. But allowing the thousands of immigration officers to continue working will come at a cost.

Joseph Edlow, the deputy director of policy for the agency, wrote to his approximately 19,000 employees that it avoided the furloughs of nearly 13,400 employees scheduled for this Sunday by administering “significant spending cuts” that would delay operations.

“The depth of these cuts is something Congress asked us to avoid in the spring, with assurances of providing financial support before their August recess,” Mr. Edlow wrote in an email to employees, which was obtained by The New York Times. “Obviously that did not happen and we are now forced to implement severe cost-cutting efforts.”

Citizenship and Immigration officials told Congress in May that the pandemic-driven decline in revenue from fees attached to immigration and visa applications would force the agency to furlough employees unless it received an emergency infusion of $1.2 billion. The agency suspended most of its activities on March 18 as states imposed social-distancing measures, delaying citizenship ceremonies for thousands of potential immigrants.

But some agency employees and members of Congress said it was President Trump’s increased vetting of applications, travel restrictions and other measures to deter potential immigrants that have diminished fee revenue. Unlike most federal agencies, Citizenship and Immigration Services relies heavily on fees, not congressional appropriations.

Both Democrats and Republicans also criticized the administration for not providing enough information about the emergency request, leaving thousands of the immigration officers questioning for weeks whether they would still be on the payroll of the agency.

“The good news is it gives us some breathing space so we can continue operating while the administration and Congress work out longer-term reviews and solutions to the funding crisis,” said Michael Knowles, the president of Local 1924, the union chapter representing Citizenship and Immigration Services employees in the Washington area.

The agency was initially set to furlough the officers on Aug. 3, but it delayed the action until the end of the month after senators pointed out that new projections showed the agency would end the fiscal year with a sufficient balance to pay its employees. The agency was able to bring in $800 million more than it expected when it notified Congress of its shortfall in May, according to a letter members of Congress sent to the agency on Aug. 21.

“I’m glad U.S.C.I.S. has rethought this decision, which would have crippled our immigration system and left so many in limbo,” said Senator John Cornyn, Republican of Texas.

But the additional funds are not enough to sustain the agency for long, Mr. Edlow said. The Trump administration already moved last month to raise the cost of naturalization applications by more than 80 percent and to substantially tighten eligibility requirements for a subsidized application.

Mr. Edlow told his employees that to prevent the furloughs, the agency would also be forced to reduce the number of contractors assisting officers with adjudications. The immigration system already suffers from severe backlogs and delays that immigrant advocates say have been exacerbated by Mr. Trump’s immigration agenda.

“Averting this furlough comes at a severe operational cost that will increase backlogs and wait times across the board, with no guarantee we can avoid future furloughs,” Mr. Edlow warned in his statement. “A return to normal operating procedures requires congressional intervention to sustain the agency through fiscal year 2021.”

Sarah Pierce, a policy analyst for the Migration Policy Institute, a nonpartisan immigration group, said the move also alleviated any pressure on Congress to increase oversight of the agency by attaching safeguards to any emergency funding.

“There’s clear mismanagement happening with U.S.C.I.S.’s funding,” she said. “This is traditionally an agency that receives little congressional oversight. Now that Congress is backing off, we’re not going to get that congressional oversight that previously they were motivated to do and that this agency clearly needs.”