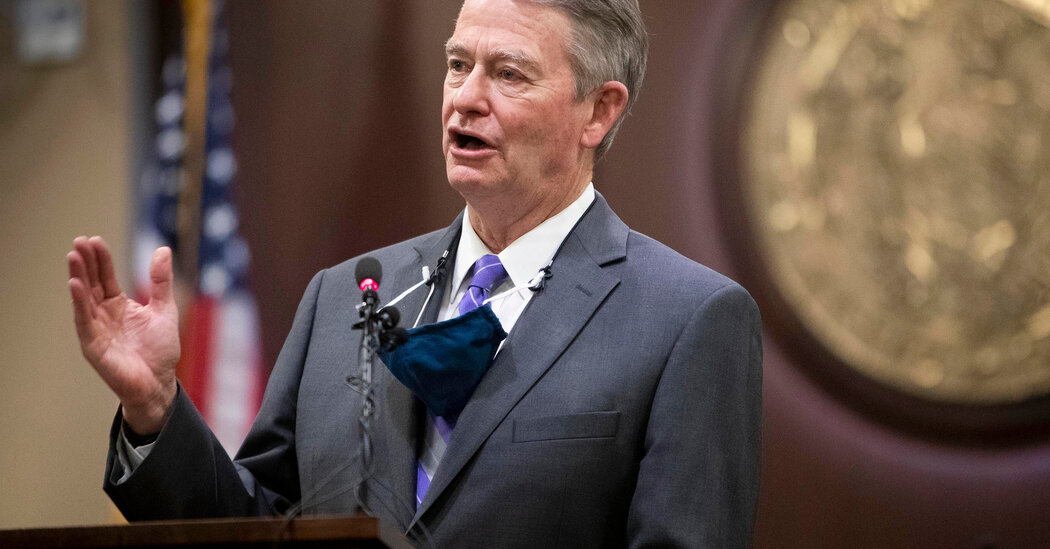 Idaho on Monday became the first state to adopt a copycat of an unusual new Texas law that relies on ordinary citizens to enforce a ban on abortions after about six weeks of pregnancy as a way of getting around court challenges to its constitutionality.

The Idaho House, led by Republicans, approved the bill, 51-14, and sent it to Gov. Brad Little. Mr. Little, a Republican, has already signed a separate law restricting abortion that passed last year.

The bill was the latest display of confidence from anti-abortion activists and lawmakers across the country. Both sides of the abortion debate anticipate that by summer, the Supreme Court could pare back or overturn Roe v. Wade, the 1973 decision that established a constitutional right to abortion.

Under Roe, states cannot ban abortion before a fetus is viable outside the womb, which with modern medical technology is about 23 weeks of pregnancy. But the court’s six conservative justices appeared willing to abandon that decision when they heard oral arguments in December about a Mississippi law that bans abortion after 15 weeks.

The court has also declined to intervene to stop the Texas law, which took effect in September. On Friday, the Texas Supreme Court said it was unable to stop the ban because the law explicitly prohibits the state officials who were sued from enforcing it.

On Monday, the sponsors of the Idaho bill said they were encouraged by those decisions.

To those who objected that the bill was unconstitutional, Mr. Harris noted that “Texas has already made two visits to the Supreme Court.” And, he added, “abortions are still being stopped in Texas.”

The Idaho bill differs from the Texas law in some key respects.

Texas allows any civilian to sue anyone, whether a ride-share driver or a doctor, who “aids or abets” a woman in getting an abortion after fetal cardiac activity is detected, usually around six weeks — before many women are aware they are pregnant. It provides $10,000 plus legal fees for successful suits. The Idaho bill, similarly titled a “heartbeat bill,” allows family members of what the legislation calls “a preborn child” to sue the abortion provider, and establishes a reward of at least $20,000, plus legal fees. It allows lawsuits against providers for up to four years after an abortion.

The Texas law, considered the strictest in the nation, allows no exceptions for women who are victims of rape or incest. The Idaho bill provides an exception but requires women to file a police report and show it to the provider before they can get an abortion. Neither state would prosecute women who have an abortion.

Last year, shortly before Texas passed its law, Idaho had adopted a law making it a crime to perform an abortion after fetal cardiac activity was detected. But recognizing that the law was probably unconstitutional, lawmakers attached a trigger, saying it would not take effect until an appellate court upheld a similar law in another state.

Idaho’s attorney general, a Republican, had warned in an opinion this month that the new bill with civilian enforcement, too, would “likely be found to violate recognized constitutional rights.” He said it could also violate the separation of powers outlined in the Idaho Constitution.

The bill identifies those who may sue as the mother, grandparents, siblings, aunts and uncles of the “preborn child,” as well as the father. It does not allow rapists to sue after an abortion is performed.

The most restrictive in the country. The Texas abortion law, known as Senate Bill 8, amounts to a nearly complete ban on abortion in the state. It prohibits most abortions after about six weeks and makes no exceptions for pregnancies resulting from incest or rape. The law has been in place since Sept. 1.

Representative Lauren Necochea, a Democrat who opposed the bill, asked before Monday’s vote whether the siblings of a rapist could sue the abortion provider.

Mr. Harris, the co-sponsor, indicated they could.

Ms. Necochea said the exceptions for rape and incest were “not meaningful.”

“This bill is not clever, it’s absurd,” she said.

Data shows that abortions in Texas have dropped 60 percent since its law took effect in September. Some clinics in neighboring states have seen an 800 percent increase in demand for abortion as women cross state borders for the procedure. One of those states, Oklahoma, is considering its own six-week ban.

“It is appalling that anyone could look at the chaos and harm in Texas over the past six months and think, ‘I want that for the people in my state,’” said Alexis McGill Johnson, the president of Planned Parenthood Action Fund.

Planned Parenthood said it would lobby the governor not to sign the bill.

Sydney has wettest year on record with 2.2 metres of rain in 279 days

Hunter Biden could be charged with tax crimes