Ice Volcanoes Reshape Pluto and Hint at a Hidden Ocean 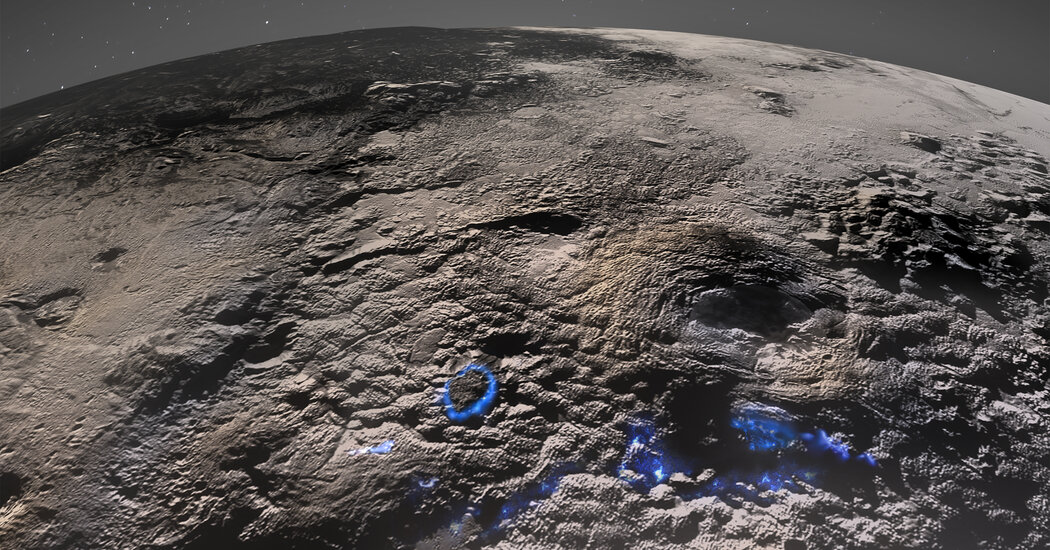 In July 2015, NASA’s New Horizons spacecraft gave humanity its only close-up of Pluto. The spacecraft found that the dwarf planet, far from being a featureless and frigid orb, was an ostentatious world with epic impact craters, methane ice and nitrogen snow.

Two of its mountains, Wright Mons and Piccard Mons, were suspected of being volcanoes. But instead of spewing molten rock, they would be built of, and capable of erupting, ice in a process known as cryovolcanism.

After years of close examination of data from New Horizons, scientists think they have spotted evidence of recently erupted ice lava, a sign that Pluto is home to cryovolcanoes that were active in the immediate geologic past.

“We tried to find some other way to explain it, but we just really couldn’t,” said Kelsi Singer, a senior research scientist at the Southwest Research Institute in Boulder, Colo., and an author of the study, published Tuesday in the journal Nature Communications.

If the team is correct, the implications are significant. Any erupting volcano requires a molten fuel source. If these ice lava deposits are young, then the underworld just below this spot on Pluto’s icy shell was, at least to some degree, hot and liquid very recently. And such a finding gives credence to the hypothesis that present-day Pluto is an ocean world, however improbable that may seem for a tiny, icy orb so far from the sun.

In the past four decades, possible cryovolcanic features have been spotted throughout the solar system, from the dwarf planet Ceres in the asteroid belt out as far as Neptune’s wintry moon Triton.

An icy lava eruption has never been witnessed, but seeing one on a world like Pluto would be nothing short of surreal: The icy lava may slowly extrude from a dome’s vent or fissure as a gelid, mucilaginous mass — something comparable to Silly Putty but made of one or multiple frozen chemical compounds — and largely retain its chunky shape in a low-gravity, exceedingly cold environment.

The discovery of Wright Mons and Piccard Mons on Pluto, two icy mountains with central pits that looked like eruptive openings, suggested it too was a member of the cryovolcanic club. But whether these ice volcanoes were genuinely what they looked like, and whether they were still active, proved difficult to determine.

After their forensic examination of New Horizons’s flyby images, Dr. Singer and her colleagues suspect that Wright Mons and Piccard Mons are not two big cryovolcanoes. Instead, they are probably colonies of smaller volcanic domes, which are usually made when very gloopy lava slowly erupts and forms squat piles. It appears that many such domes grew in the same area and got squashed together, making two mountainous masses.

But is this cryovolcanic colony still alive?

The team noticed that much of the region is coated in irregular, undulating patches mostly made of water-ice. This terrain looks nothing like contorted deposits elsewhere on Pluto formed by erosion. That leaves one likely explanation: It was made by water-ice lava flows. And as their deposits lack craters, the flows erupted close to the geologic present.

Icy eruptions may be alien to this planet, but some geologic fundamentals are probably familiar: Just as Earth’s active volcanoes sit atop reservoirs of partially molten rock, Pluto’s volcanic domes may sit atop partially liquid reservoirs of water-ice. But in the dwarf planet’s case, these reservoirs may feed off one big ocean.

Earlier studies have suggested Pluto has a subsurface ocean, although explaining its existence is difficult.

A world this small would have lost the heat from its formation long ago, and it does not contain enough radioactive, heat-releasing elements in its rocky core, so any liquid below its icy outer shell should be frozen. Various heat-trapping hypotheses are also currently impossible to prove.

It’s not fanciful to imagine frozen worlds containing oceans. Europa, a moon of Jupiter, and Enceladus, which orbits Saturn, both have incontrovertible internal oceans. But the gravitational interactions with their planets and nearby moons thought to be heating them are not applicable to Pluto.

And yet Pluto’s youthful cryovolcanic terrain bolsters the case for its own subterranean seas, while adding evidence to two theories: that ocean worlds are commonplace in the cosmos, and that scientists cannot always explain how their existences are possible.

Ultimately the data from New Horizons and other spacecraft are continually teaching researchers the same lesson. “We needed to have a better imagination,” said Jani Radebaugh, a planetary scientist at Brigham Young University not involved with the study.