‘I Know She’s Gone, but Why?’: Love and Loss at a Boulder Grocery Store 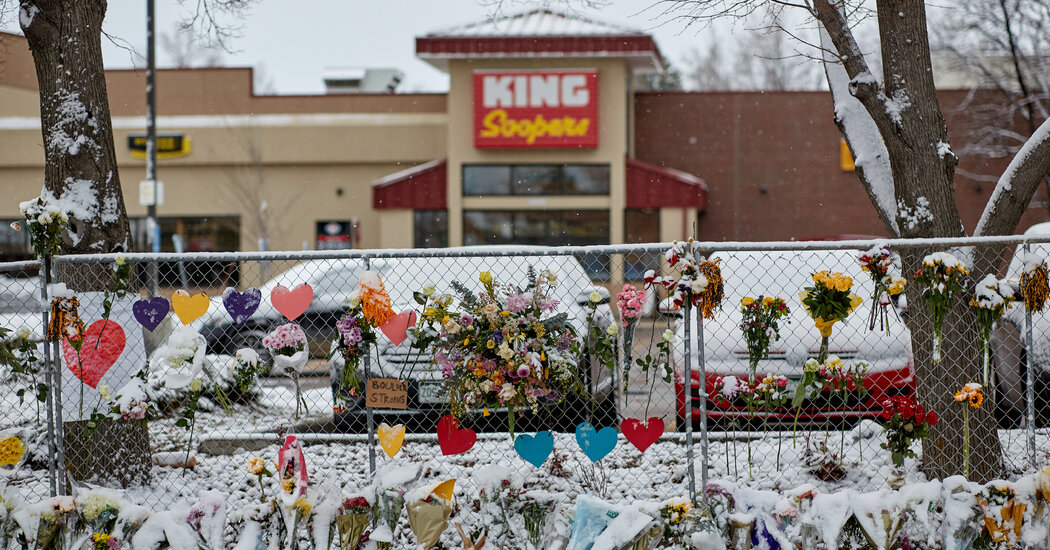 BOULDER, Colo. — Teri Leiker and Clint Ponsford shared a love story that began and ended at the grocery store.

They spent more than 30 years working at the same King Soopers supermarket in Boulder, where Ms. Leiker charmed customers with her big laugh and Mr. Ponsford could spot the peaks of the Flatirons when he went outside to wrangle shopping carts. They had both competed in Colorado’s Special Olympics and helped each other get through a lot: deaths, a breakup and the challenges of navigating this world as two people with cognitive disabilities.

About a year and a half ago, their friendship turned into something deeper. They went on karaoke dates. They watched Disney movies that Ms. Leiker adored. On workdays, they would get up at 3:30 a.m. in Ms. Leiker’s condo to make coffee, trade kisses and watch reruns of “Murder, She Wrote” before Mr. Ponsford left for the early shift.

For a few fleeting days, the country’s horrified gaze was fixed on Boulder after Ms. Leiker, 51, and nine other people at the King Soopers were killed by a 21-year-old gunman whose motives remain a mystery. Inevitably, the national attention drifted away, to shootings that claimed four lives at a Southern California real estate office or five at a doctor’s home in South Carolina, to the Washington leaders, once again, vowing to either pass or prevent new gun restrictions.

But that gray Boulder afternoon has not faded for Mr. Ponsford. As funerals for victims are held this week, he and other survivors and families are just beginning to cope with the anger, grief and empty spaces in their lives.

“I know she’s gone, but why?” Mr. Ponsford, 62, said one afternoon as he sat at one of the college burger joints that Ms. Leiker liked, where she would sneak fries from friends’ plates. “Why did this happen? Why did he take my girlfriend?”

His brother Tyson sat nearby as Mr. Ponsford talked about finding Ms. Leiker and losing her. Mr. Ponsford had stayed at his brother’s home just after the shooting, and other family visited for Easter so they could all spend time together.

“He’s having a rough go of it the last couple days,” Tyson Ponsford said.

Clint Ponsford and his family have been overwhelmed after attending so many vigils and memorials. They hung a poster for Ms. Leiker amid the photos and flowers garlanding a security fence outside the shuttered King Soopers. It says, “We Will Always Miss You.” Mr. Ponsford took a photo beside it, but he does not like to go back to the scene now.

For almost two weeks, Colorado has also been grieving. The state is immersed in a now-familiar mourning ritual for mass shooting victims, where friends gather to share sweet stories and the governor imparts the state’s condolences, again and again.

Denny Stong, who dreamed of being a pilot, was memorialized last Thursday at an airport overlooking the Front Range of the Rockies. The next day, Lonna Bartkowiak’s friends pinned purple flowers to their shirts and remembered her as a compassionate friend and mainstay of Boulder’s festival scene. On Wednesday, Rikki Olds’s friends and family celebrated her love of ketchup, ever-changing neon hair colors and the irrepressible joy she brought to her job as a front-of-store manager at King Soopers.

Friday was Ms. Leiker’s turn. From the University of Colorado’s basketball court, friends, politicians and people who knew her from work or through programs for people with disabilities marveled at the impact a single courtesy clerk had on so many.

“Teri was the heartbeat of this community,” Matthew Dockendorf, director of the university’s marching band, said during the memorial.

These are some things her family and friends wanted people to know: Ms. Leiker was a lifelong Coloradan who loved the mountains. She graduated from a special education program at Longmont High School and had lived independently since she was 21.

She loved University of Colorado sports — especially women’s hockey — and delighted in posing for photos with Chip the Buffalo, the university’s mascot. She rocked a fanny pack almost everywhere she went. She belted “Let It Go” with abandon at karaoke bars.

“Everything was a happy moment for her,” Lexi Knutson, one of her close friends, said in an interview. Ms. Knutson met Ms. Leiker a few years ago through the University of Colorado chapter of the Best Buddies program, which connects students with adults from around Boulder who have intellectual and developmental disabilities.

Ms. Leiker started working at King Soopers 31 years ago, and her laughter and little catchphrases — “Oh, honestly!” — left a decades-long impression on co-workers and customers. She loved it whenever a shopper she knew arrived with a reusable Mickey Mouse bag. She did a happy dance when a friend swung by the store. She gave pennies to children to ride the mechanical horse.

There were also hard things. Some childhood classmates had made fun of her, Ms. Leiker’s mother, Margie Whittington, told The Boulder Daily Camera. Ms. Leiker cried for people uprooted by Colorado’s floods and wildfires. She hated to see her friends upset, Ms. Knutson said.

“If you started crying, she’d shake her finger at you and be like, ‘That’s enough,’” she said.

Her friends say they are trying to remember that admonition now.

“She would hate to see the pain people are going through,” said Katie Heinen, who also knew Ms. Leiker through the Best Buddies program.

Mr. Ponsford said the pandemic was especially hard. So many of the college pep rallies and games Ms. Leiker had loved were canceled. A gala evening for King Soopers employees celebrating their 30-year anniversary was also called off. Mr. Ponsford would tell Ms. Leiker, We’re going to get through this together.

Mr. Ponsford said they had both received their first coronavirus vaccination on St. Patrick’s Day. They had hoped they could soon take a trip to Disney World or go to a Renaissance fair this summer.

Five days later, midafternoon, March 22: Mr. Ponsford caught Ms. Leiker’s eye near the end of his shift as he headed outside to collect stray shopping carts. He wanted her to come with him. He said she waved from her post bagging groceries and told him she would see him later.

Mr. Ponsford said he saw the attack begin in the parking lot as he was pushing a line of carts toward the store. He said he watched as the gunman shot people down on the asphalt, then went into the store, right toward Ms. Leiker.

“I was scared,” he said. “I was worried about my sweetheart.”

Mr. Ponsford ran for safety at a nearby pizza place and called his brother and Ms. Leiker’s mother as the police swarmed in. He and her friends spent those first hours praying she had gotten out, that she was not answering calls because she had lost her phone in the chaos. Mr. Ponsford learned the reality early the next morning.

After a few nights spent with family, Mr. Ponsford moved back into Ms. Leiker’s condo. It is comforting, being surrounded by photos and memories of watching Broncos games together and cooking steaks and sitting out on the patio, but also hard, he said. Each night, he phones one of Ms. Leiker’s close friends and checks in with Ms. Leiker’s mother to say he got home safe — calls that she used to make.